It's official. Arya is the Filipinos' favorite Stark (or is she?)

MANILA, Philippines – We are on the cusp of our own “Song of Ice and Fire.”

As the summer surges and heat indexes go through the roof, winter is inevitably coming on the morning of April 15, Monday, as the final season of Game of Thrones (GoT) premieres locally.

The end of an era

Back when Game of Thrones debuted in April 2011, we were still living in a pre-streaming, pre-Netflix world.

We consumed media differently then. TV worked on an installment basis. Every week, viewers were subjected to an hour-long episode, followed by six days of speculation and anticipation.

This behavior dictated the culture of how we consumed Game of Thrones. Viewing was a shared experience hinged on simultaneity. We would organize watch parties; discuss moments like the Battle of the Blackwater, the Red Wedding, Cersei’s Walk of Shame, and then anxiously wait for the next chapter.

Today though, we live in an age where the default release model of television is season-dumping and where the norm is to watch things at our own pace. Will it still be possible for a show like Game of Thrones to exist in this current landscape?

We can’t say for sure. But from the looks of it, no series today is as globally-pervasive nor is as capable of prolonging the conversation.

This final season of Game of Thrones is not just an end of a show, but the swan song of the previous era of traditional TV.

In 2018, Game of Thrones took a year off in preparation of its upcoming eighth and final season.

We wanted to see what was fueling GoT conversations during this off-season. So with the help of TheNerve, a data insights company, we looked to Twitter to identify which houses and which characters were Filipinos talking about the most. 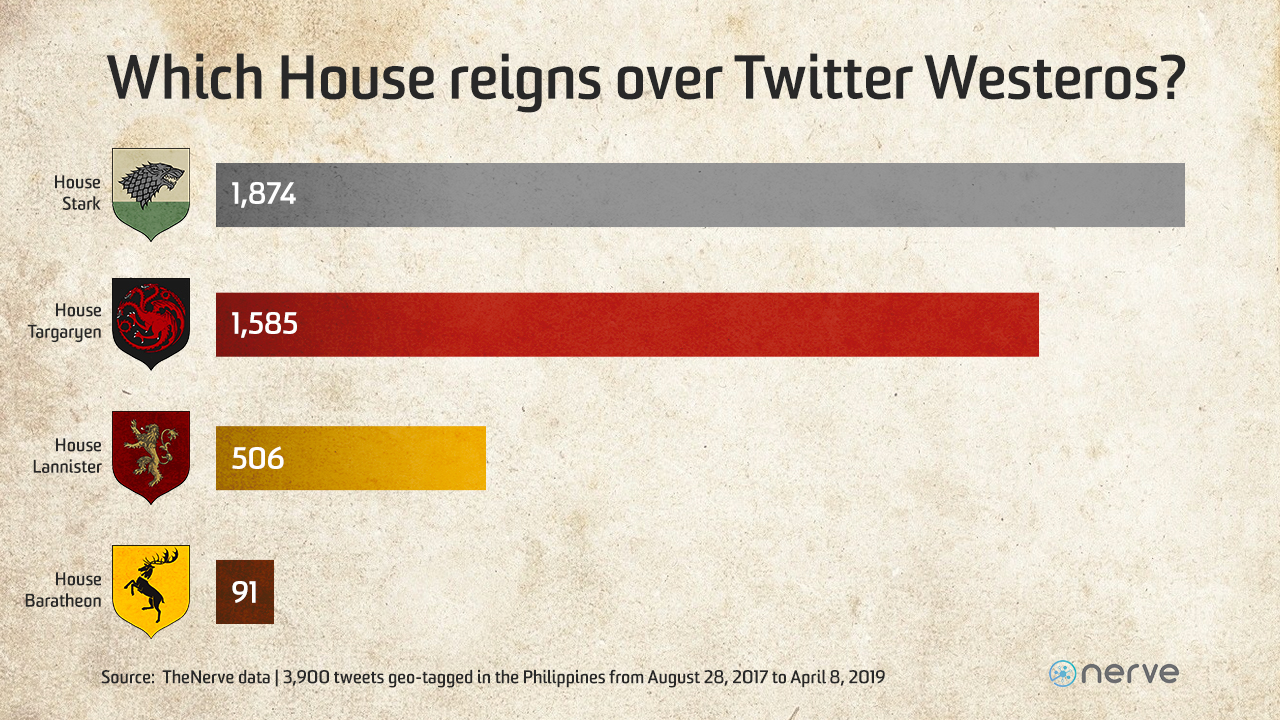 From August 28, 2017 to April 8, 2019, tweets geotagged to the Philippines were largely mentioning the Stark and Targaryen houses.

It’s natural that these two houses carried the most mentions as the newly-minted couple of Daenerys Targaryen and Jon Snow emerged last season as the main protagonists of the entire series.

Jon Snow though seems to be the more popular one as Targaryen conversations surged after the show confirmed the long-standing theory on Jon’s parentage — him being the secret son of Prince Rhaegar Targaryen and Ned Stark’s sister, Lyanna.

Since it was revealed that Jon’s parents were married and that Rhaegar was annulled from his previous wife, Jon has now become the legitimate heir to The Iron Throne (with an even greater claim to the throne than his aunt/lover Dany).

Jon Snow though isn’t the only Stark hogging the spotlight. On the Pinoy Twittersphere, Arya Stark is the most frequently mentioned, followed by Jon, Dany, and the rest of the Stark pack.

However, it’s worth mentioning that Arya’s Twitter popularity may have been a result of real-world events and people outside of the Game of Thrones fandom.

Arya mentions spiked the most when the actress portraying her, Maise Williams, revealed in an August 2018 interview that she was a ‘stan’ of popular K-Pop boyband BTS.

Maybe the BTS army is just as formidable as the troops of Westeros?

At the core of Game of Thrones are relationships. Storylines are fueled by how characters are connected to one another — enemies, allegiances, secret identities.

We wanted to see which characters were Filipinos most associating with each other online. We gathered this data by looking at the frequency of GoT characters appearing together in a single tweet.

Navigating the data through the visualizations below, a thick line can be seen connecting Daenerys and Sansa. This means that Sansa’s name has frequently popped up in tweets mentioning Daenerys (39% of the total tweets about Daenerys mention Sansa, while 21% of those about Sansa mention Daenerys).

However, even with seven seasons already under the show’s belt, Daenerys and Sansa have yet to meet.

These conversations may have been fueled by a scene shown of the two women meeting in the Season 8 trailer. People probably want to know if Sansa will be accepting of her “brother” Jon’s new girlfriend, Dany?

(It’s no surprise then that another strong character connection in the visualization is that of Jon and Dany. Kilig much?)

However, we have to remember that Targaryens and Starks are not exactly the best of friends. Sansa’s grandfather and uncle, Rickard and Brandon Stark, were burned alive by Dany’s father, the Mad King Aerys II. This execution, alongside the accusation of Rhaegar kidnapping and raping Lyanna (which brought the two to the Mad King in the first place), served as the catalyst for Robert’s Rebellion.

Another thing worth noting in the visualization is how Tyrion Lannister has stronger ties to Jon, Sansa, and Dany rather than to his siblings Cersei and Jaime. Will things change this season especially given how all signs are pointing to Jaime finally redeeming himself? We’ll know soon enough. Leading the conversation with mentions in 150 comments and 10,000 upvotes is the phrase “Golden Company.” 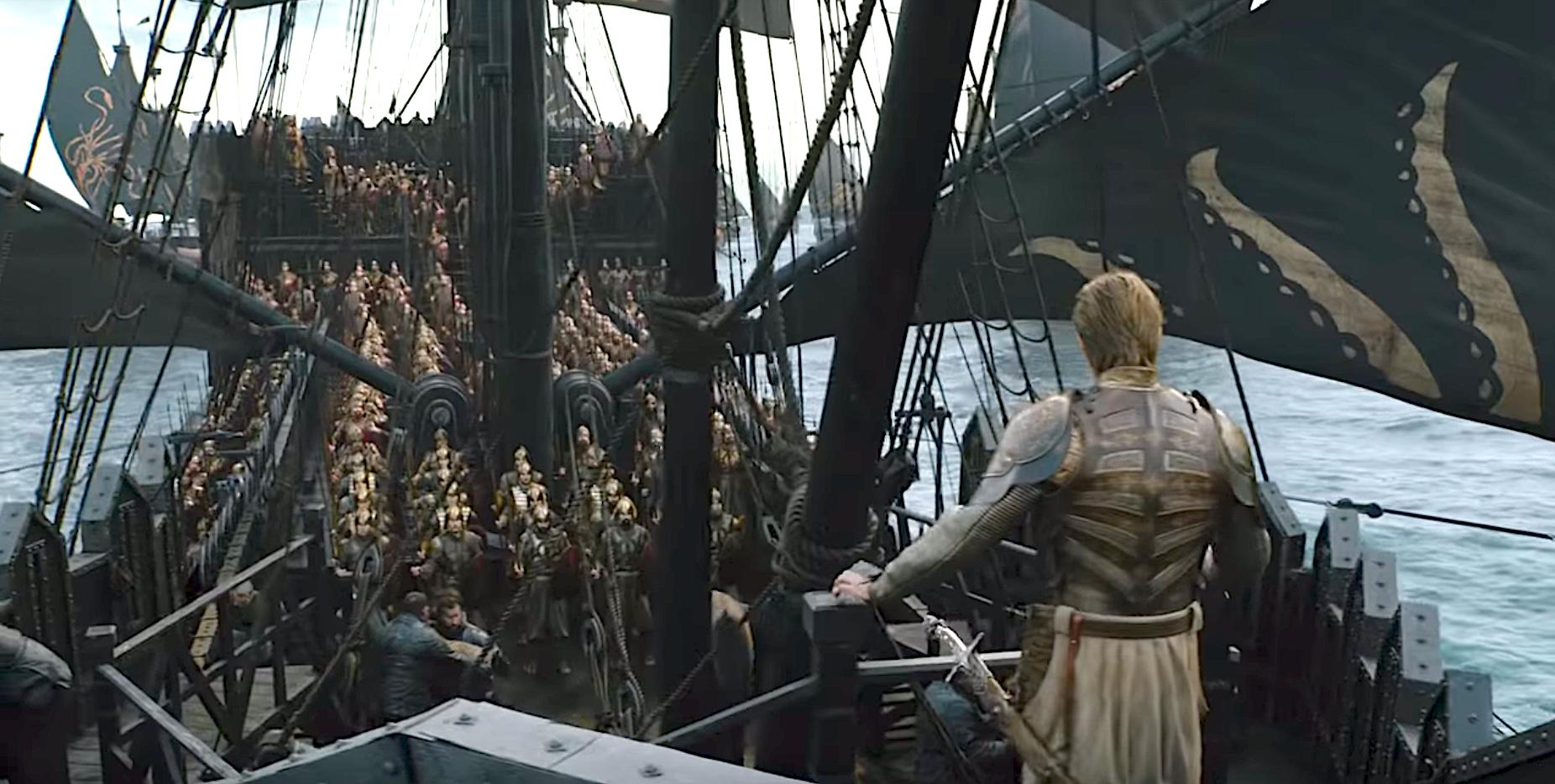 The sellswords seem to have taken the attention of many netizens even with just a split-second appearance in the trailer. Interests may lie in how they could serve as a huge trump card in the war for The Iron Throne.

Just a slight recap, in the Season 7 finale, Cersei revealed to Jaime how she lied about her promise to fight the Night King and his White Walkers alongside with Jon, Dany, and the others. Instead, she sent Euron Greyjoy all the way to Essos to avail of the Golden Company’s services, in preparation of mounting an attack against her enemies.

The question here though is, can Cersei actually trust Euron? Did he even hire the Golden Company for Cersei’s interests or his own?

Coming in next to The Golden Company are conversations about the crypts of Winterfell, with 104 comments and with over 6,100 upvotes.

Heavily featured in the marketing for season 8, huge speculation lies on what secrets the cavernous catacombs may be hiding.

Favorite fan theories include: the dead of Winterfell rising as wights (likely); hidden dragon eggs/a sleeping dragon (quite a reach); and, basically GoT’s version of Satan to Azor Ahai’s Lord of Light, The Great Other, being imprisoned there (I have no idea).

A personal favorite though, and a more grounded theory, is the discovery of Prince Rhaegar’s harp in Lyanna Stark’s tomb.

Finding the harp won’t only be physical evidence of Rhaegar and Lyanna’s love (as why else would the prince’s harp be with Lyanna in death?), but it will also be the proof needed to solidify Jon’s claim to the throne.

The harp may also serve as a poetic reminder to Dany that the brother she never met was a well-composed and sensitive ruler unlike her father, Aerys, and other brother, Viserys.

Other frequently mentioned topics on the Reddit thread include book and TV show disparities, Jon Snow riding the dragon Rhaegal, and Jamie Lannister’s line in the trailer “I promised to fight for the living.”

Conversations are the lifeblood of Game of Thrones. Obviously, people are so invested and immersed that their social media presence echoes not just what’s happening on the show but what they wish to happen as well.

Will the last season of Game of Thrones give fans the ending they deem they “deserve”? All we know for now is that we know nothing. – with reports from Isabel Salvosa and TheNerve Data Team (Don Kevin Hapal, Kaye Cabal, and Ralph Nodalo)/Rappler.com