MANILA, Philippines [UPDATED] - Chief Justice Renato Corona engaged in "illegal" trading of dollars when he admitted at the impeachment court that he had been buying and selling restricted foreign currency in the 1960's, former monetary officials said on Monday, May 28.

"If he was trading already in the late 60s--he said 1968--there were still import and foreign exchange controls [then], so the only way he could get dollars was from the black market," said Dante B. Canlas, a former member of the Monetary Board, the policy making body of the Bangko Sentral ng Pilipinas (BSP).

"There's now a chief justice who had been doing illegal things since 1968," said the amused Canlas, a former economic planning secretary who currently holds the BSP Sterling professorial chair in monetary economics.

Vicente B. Valdepeñas Jr., also a former Monetary Board member and a veteran banker, echoed this to Rappler at the sidelines of BSP-University of the Philippines forum in Manila City.

"The black market was not considered the legal market. It was the illegal market," stressed Valdepeñas, also a former economic planning secretary during the Marcos regime. He was unsure if there was a formal punishment associated with the illegal activity.

The existence of this black market distorted the true picture of supply, demand and price for this foreign currency, thus undermining the government's monetary policy. The black market for the greenback was then thriving and could offer at least a 50% higher return than the formal market.

In the 1960s, free trade of dollars was restricted by the central bank to control inflation and limit imports. For most of the decade, the government tried to keep the exchange rate fixed at around P2 to USD$1.

Valdepeñas, however, also explained that because there were multiple exchanges and some deregulations were already pursued in the 1960's, the exchange rate did fluctuate. The exchange rate between 1960 and 1969 fluctuated between an annual average of P2.73 and P3.92, data from the BSP showed. 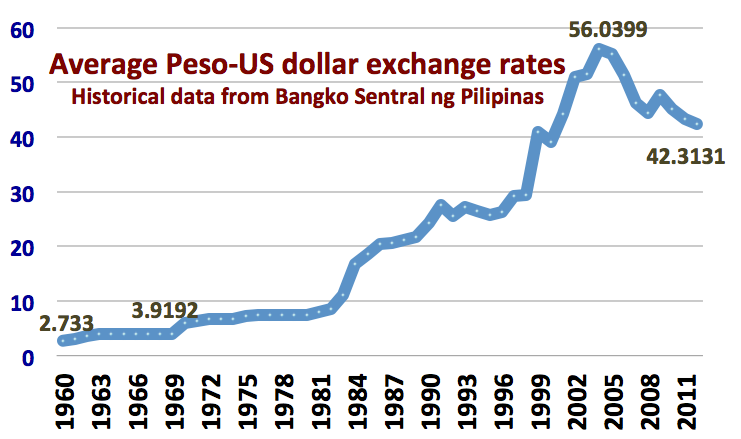 When Corona testified at his impeachment trial at the Senate on May 25, he explained that he started investing his peso savings in dollars, betting on the devaluation of the peso.

He was trying to justify how he gained wealth of at least P183 million -- of which US$2.4 million are in his dollar accounts -- while in a public office. He narrated to the senator-judges that he started investing in dollars in the late 1960's when the exchange rate was--as he claimed--at P2:$1. He said he was encouraged by his gains when the exchange rate ratio dramatically climbed nearly sevenfold.

"At the time, the businessmen...those who were earning dollars from their businesses have to surrender their dollars. But the ordinary people...[those] who travelled abroad didn't surrender excess dollars anymore. So if someone needed dollars, [we said] 'Do you want to buy, here buy ours'," he said in Filipino when he was on the witness stand.

Speculators against the peso are frowned up by monetary officials. Even today, privately hedging against the peso is linked with hedging demands that may not be legitimate, shared BSP Governor Amando M. Tetangco.

"In terms of speculation, if I can judge by the action that was taken by the BSP late last year when we imposed a higher capital charge for non-deliverable forward transactions, the idea is to make sure that these derivatives are being used to hedge legitimate demands," Tetangco stressed, highlighting how they try to police against speculators.

"What we have found out is that the bulk of the FDX (foreign denominated exchange) transactions was basically speculative in nature… FDX carry certain risks so we said banks should be aware they are taking more risks if they engage in this. We said they should have enough offer in case there is a change in sentiment. So we imposed higher tax revenues," he added.

Corona has maintained that he continued to invest in dollars since 1968. However this investment strategy does not make sense to financial experts.

Over the past 40 years, "the return on investments has been decreasing. There have been structural changes in the financial system in the Philippines and globally so I believe that having the same strategy over 40 years is not good," said Lisa Grace S. Bersales, Vice President for Planning & Finance at the University of the Philippines. - Rappler.com