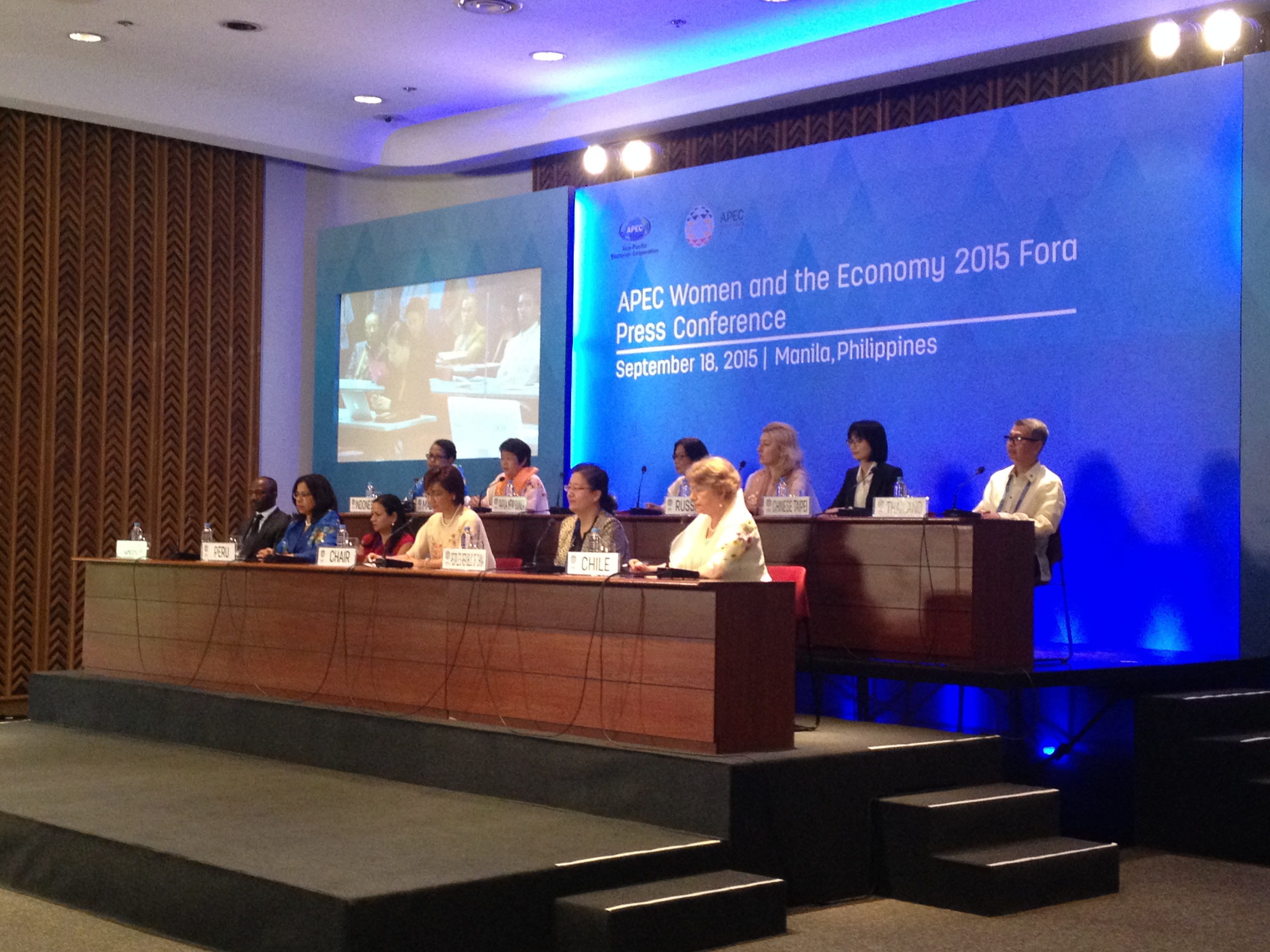 JOINT STATEMENT. APEC leaders release a 35-point joint statement (plus two annexes) on Friday, September 18, 2015, as a recognition to women's contribution for economic development and prosperity in the region and beyond. All photos by Lynda C.

MANILA, Philippines – The 3-day Asia-Pacific Economic Cooperation (APEC) Women and the Economy 2015 Fora concluded on September 18 with a joint statement, zeroing in on the role of women as prime movers of inclusive growth.

Inclusive growth means providing opportunities for all, including women as both drivers and beneficiaries of this development, which, in turn, can promote gender equality. (READ: Aquino:Women are better partners for inclusive growth)

In particular, the 35-point joint statement (plus two annexes) highlighted the APEC leaders' recognition of women's contribution to economic development and prosperity in the region and beyond.

APEC leaders also welcomed the outcomes of the public-private dialogue on women and the economy (PPDWE), which emphasized that women are more than just a niche market, but rather a driving force for economic change.

"The PPDWE called on all stakeholders to continue pursuing a women's economic empowerment agenda to create new opportunities for women, highlighting in particular the need for collaboration between the public and private sectors."

Through the joint statement, APEC leaders also cited 2015 as a "landmark year", celebrating the 20th anniversary of the Beijing Declaration and Beijing Platform for Action (BPfA), agreed on by the 189 United Nations (UN) member-states during the 4th World Conference on Women in 1995.

"The BPfA recognizes that women make significant contributions to the economy and calls for the promotion of women's economic rights and independence, including access to employment; appropriate working conditions and control over economic resources; and equal pay for equal work and work of equal value," the joint statement read.

The APEC leaders also encouraged member-economies to take concrete steps toward addressing gender disparities in women's labor force participation, recognizing the commitments of the G20 leaders in 2014 to reduce the gender gap by 25% by 2025.

Trade and Industry Secretary (DTI) and APEC Ministers Responsible for Trade Chairperson Gregory L. Domingo said during the high-level policy dialogue on women and the economy Friday that since the Philippines is pushing for greater focus on micro, small, and medium enterprises (MSMEs) during its APEC hosting this year, "women enterprises stand to benefit as APEC is now also giving special focus to realize the full economic potential of women."

Domingo said the economic potential of women is immense, as the UN estimated in 2010 that the APEC region loses up to $47 billion in output yearly due to lack of women's participation in labor markets.

He added that in 2012, the UN estimated that up to $89 billion a year could be added to the regional economy when barriers to women's economic participation are eliminated.

Thus, banking on the Boracay Action Agenda, which emphasized opening up cross-border business opportunities for small firms vital to boosting job creation, innovation and productivity within Pacific Rim economies, the APEC women and economy fora specified the following to strengthen focus on MSMEs led by women: 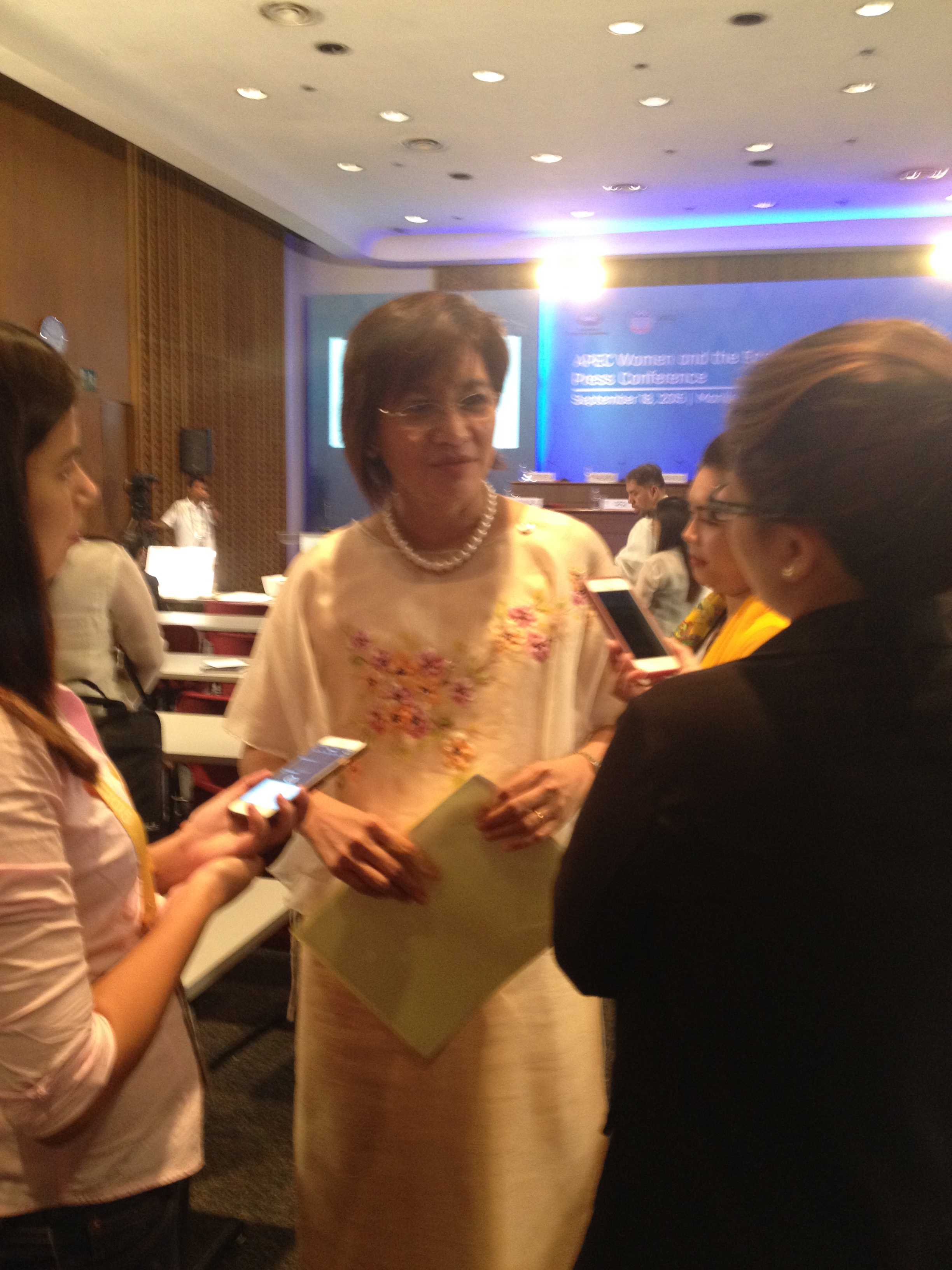 While the APEC leaders said they are on track in achieving the points included in its joint statement, still, the challenges to make women pro-active actors in the stage of inclusive growth, particularly those in MSMEs, remain daunting.

Speaking from the sidelines of the fora's conclusion, DTI Undersecretary and APEC Women and Economy 2015 Fora Chairperson Nora K. Terrado said that access to capital among MSMEs remains a major concern across the region.

"For each economy, we'll do our part to share best practices and endeavors, if applicable to our own country (to address the issue of access to capital among MSMEs)," she said.

Terrado said both the public and private sectors have to work together to craft interventions to make micro entrepreneurs bankable or eligible for loans to capitalize or expand their businesses.

"At least on the part of DTI, we communicate to these micro enterprises the help available to them. We have some work to do," she said.

She added that informal sectors must be able to build their credentials, like showing proof how diligent they are in paying their dues or bills related to running their businesses.

"If they can establish that paying habit, then they'll have access to capital," Terrado said.

She added while the fora was women-focused, men also must be included to push the thrust of women as prime movers of inclusive growth.

And as Domingo concluded in his address at the conclusion of the fora, "Looking at the quality of the participation and the energy of the participants in the APEC Women and Economy fora over the last few days, I have no doubt that women economic empowerment is already at hand."

The joint statement will be the fora's contribution to the APEC Economic Leaders' Meeting in November in Manila.

The 2016 Women and Economy Fora and other related activities will be held in Peru. – Rappler.com