MANILA, Philippines (3rd UPDATE) - The Aquino government has made giant steps in what his predecessors tried but failed to do: pass a sin tax reform bill at the House of Representatives, inching closer to enacting it into law.

The popular and determined government put its weight behind a piece of legislation that rests at the heart of industries where politics and economics traditionally intersect: sin taxes.

On late Wednesday, June 6, a reform bill on the most crucial element that makes "sin" products--tobacco and alcohol--affordable made it through the plenary at the Lower House. It has been more than 15 years since a sin tax bill made it out of committee meetings and was finally voted on by lawmakers.

In a landslide vote, 210 lawmakers favored the Palace-backed House Bill 5727, while 21 opposed and 5 abstained. The votes overcame traditional issues, such as job losses and smuggling, raised by anti-sin tax reform lawmakers.

Check Rappler's live blog on what went on during the crucial voting at the House.

The bill will result in higher prices for most cigarette and alcohol brands, addressing a stigma that the cheapest sin products in the world are found in Philippines, no thanks to strong lobby from the politically-connected industry players.

It will also raise between P31 billion to 33 billion in taxes during its first year, boosting the fiscal health of the government so it could afford to provide more social services, among others.

When the sin tax reform bill becomes a law, alcohol and cigarettes--especially the lower-priced brands--will get more expensive for the average consumer.

Below is the difference between the current 4-tiered tax system and the HB 5727's two-tiered one: 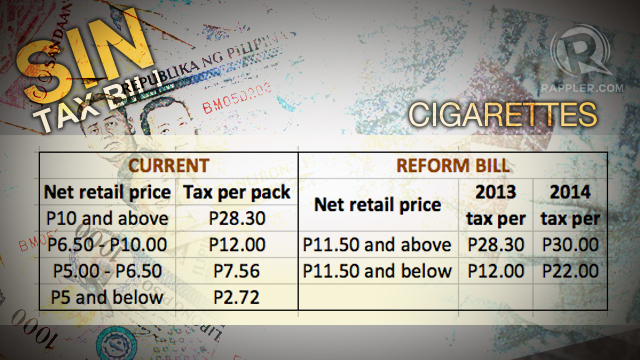 Below are the HB5727's reforms for the specific liquor products: 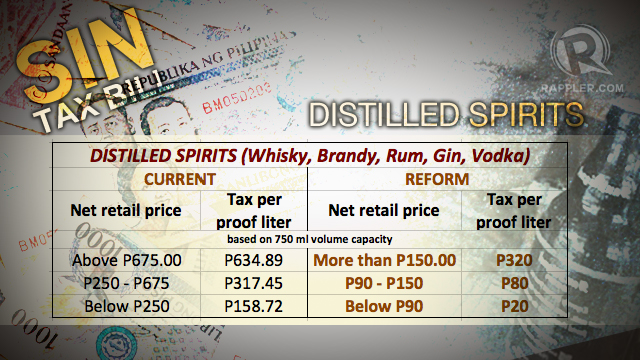 * Spirits produced from nipa sap, coconut, cassava, camote or buri plam or from cane sugar are taxed P14.68 per proof liter. Above prices are for products from other raw materials. 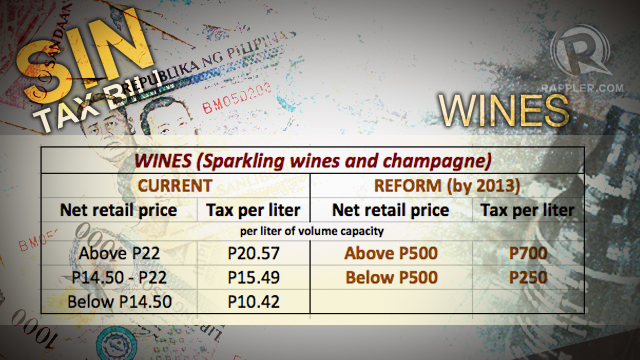 Up to 85% of those extra pesos will be plowed towards providing Universal Healthcare for Filipinos and 15% to tobacco farmers, according to Bureau of Internal Revenue (BIR) Commissioner Kim Henares.

The universal health care program will get a huge lift from the estimated P26 billion it will receive in the first year the bill is enacted.

The 4th quintile of the poorest are not yet covered by Universal Healthcare because we don't have enough revenue as of today, said Henares at the sidelines of the house deliberations. She said the additional revenue would cover that segment of the population.

"From a health perspective, we should make it unaffordable for them," added Abaya.

"We are talking about addictive products, sin products. It's definitely different from milk, from chicken or meat. It is therefore not a right of a person to assert that they should have equal access to alcohol or tobacco," he said.

Those who voiced opposition to the bill claimed that it was regressive, placing a higher burden on the poor than their richer counterparts.

The current sin tax system favors local and lower-priced brands, which are more affordable to the poor. The reform bill seeks to make even the lower-tier brands more expensive.

During the second reading of the bill, Zambales Rep. Milagros 'Mitos' Magsaysay said, "95% of those who drink alcohol in this country come from the poor sector and can't drink wine." She accused the bill of being anti-poor.

Bayan Muna Rep. Teodoro A. Casiño was critical of the government for not leading a more 'aggressive' campaign against tobacco. He charged the administration with being more concerned with collecting revenues than reducing smoking.

"Once taxed, I expect the government would not want to reduce alcohol and tobacco intake because that would mean lower revenues," he said.

He also challenged the president to lead by example and quit smoking as well as supporting the implementation of picture-based warnings on cigarettes.

Will the reform bill level the playing field? It has, to some extent.

The ideal scenario was to level the playing field by simplifying the 4-tiered tax structure into just one for cigarettes and two for alcohol. This, however, would not have been passed.

On May 9, when HB 5727 made it through the first level--the nod of the Ways and Means committee--the Palace and its allies in Congress already agreed to a watered down version. Instead of a unitary system for cigarettes, it became 2. Instead of 2 levels for alcohol, it became 3.

The original version would have raised P60 billion, not P31 billion. But it was a compromise that, according to Abaya, was based on "certain elasticity factor" that allowed the bill to break the impasse and move it along.

"We've diluted it enough. We have to go no way but up," Abaya said, referring to the upcoming battles at the Senate and bicameral committee.

He also stressed that the bill that just made it through 3rd reading and the plenary voting will deliver its promises.

"We have leveled the playing field. We have readjusted the tax structure so that excise taxes for sin products would find its rightful place in contributing to our tax collection," he said.

Watch the rest of the response of Abaya below:

The Estrada and Arroyo governments have backed amendments to the sin tax law but were unsuccessful.

Under the Arroyo government, several studies were presented by then Finance Secretary Margarito Teves to stress to the lawmakers that majority of the Filipinos agree to sin tax reforms. These fell on deaf ears at the House. It did not help that Arroyo was an unpopular president.

"There were orders from up there, no questions asked," said Rep. Victor Franciso C. Ortega, who comes from the tobacco-wealthy province of La Union and was unhappy with the legislation.

"This is fully supported by the President so it has the greatest chance of passage," said Henares.

The effect of the bill would be to end the price and brand classification freeze on alcohol and tobacco products for years. But first the Senate has to approve its own version of the sin tax reform bill.

"At this point, i consider this a round 1 in probably a 12-rounder event. There are rounds coming up," said Abaya. - Rappler.com, with reports from Carmela Fonbuena and Katherine Visconti