How a college dropout became a billionaire

MANILA, Philippines - The youngest of the 40 richest Filipinos in Forbes list is a college dropout.

Edgar "Injap" Sia II, a 30-something entrepreneur whose barbecue chain has overtaken multinational chain McDonalds in the second top spot in a span of 7 years, did not finish college because he has set a goal, according to Butz Bartolome, a business consultant.

Bartolome said Sia was focused on being successful in business and founded Mang Inasal in an Iloilo City mall parking space with like-minded friends in 2003. To compensate for his lack of education, Sia tapped the best talents and worked with available opportunities around him.

"He was oozing with passion and full of confidence. He had a dream in his mind. He put his studies at stake and accepted that fact. He compensated [for his lack of education] by tapping the best in the community," shared Bartolome, a franchising expert and book author who was among the intimate few shepherding Sia during the growing up days of Mang Inasal.

It wasn't easy, shared Bartolome. "They were faced with so many challenges. The suppliers were turning him down because [Sia] was young and has no track record."

Sia then tirelessly went around his community in Iloilo and sealed supplier "deals," some of them forged in wet markets, others through cooperatives.

Bartolome shared that when they were preparing to grow the business through franchising, they needed to manage not just the raw materials supply but also costs.  "I looked at the financial figures and I realized there is so much inventory. Out of 30 products, only 5 are making money. The achara? People are not using it and throwing it away. We made a drastic move. We cut 30 items in the menu to 5. So when the point of expansion came, it was easy."

Almost 8 years and over 300 owned and franchised stores after, homegrown food giant Jollibee Corp scooped 70% of Mang Inasal for P3 billion. This deal essentially valued Mang Inasal -- a barbecue chain that serves unlimited rice wrapped in banana leaves sourced from communities in nearby Guimaras Island, and uses bamboo sticks provided by various cooperatives in the province -- at a whopping P4 billion.

This catapulted the college dropout to the elite list of Forbes magazine's 40 wealthiest in the Philippines in 2011.

On the flipside, this deal also allowed Jollibee to control the top fastfood chains in the country. 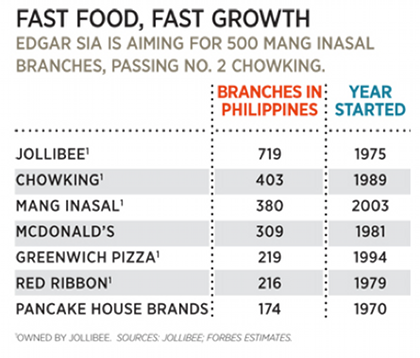 "He could have sold 100%. He could have lived a lifestyle. But he has learned to give back and share to the community which had returned to him the favor [when he was starting]," Bartolome said.

Sia remains vice chairman of Mang Inasal, now one of the key units of Jollibee.