Products in bulk packages cost more than in sachets?

MANILA, Philippines - Buying in bulk may not help shoppers save as consumer companies tweak packaging to address Philippines' competitive and unique market for 'tingi' or sachets.

"In the Philippines we were so used to thinking that big bags are economical, I think we learned it from the Americans. But on a per volume basis the sachets are cheaper than the big packs," explained Chito Macapagal the Vice President for Corporate Affairs of Unilever Philippines, the company behind big brands like, Sunsilk, Lipton, Surf, Dove, Axe and Pond's.

Rappler's survey down the aisle at a local grocery store proves Macapagal right.

"The intention was really for the bottom of the pyramid," said Macapagal, explaining that Unilever didn't want to just cater to the relatively small upper crust or what marketers in the Philippines call class 'A.' The company targeted the most sizable mass market, low income Filipinos, those in the so called 'D' and 'E' classes.

"You have to look at the base, there's still so much business and market in them. Bringing the costs down allows them to spend and enjoy," he said. 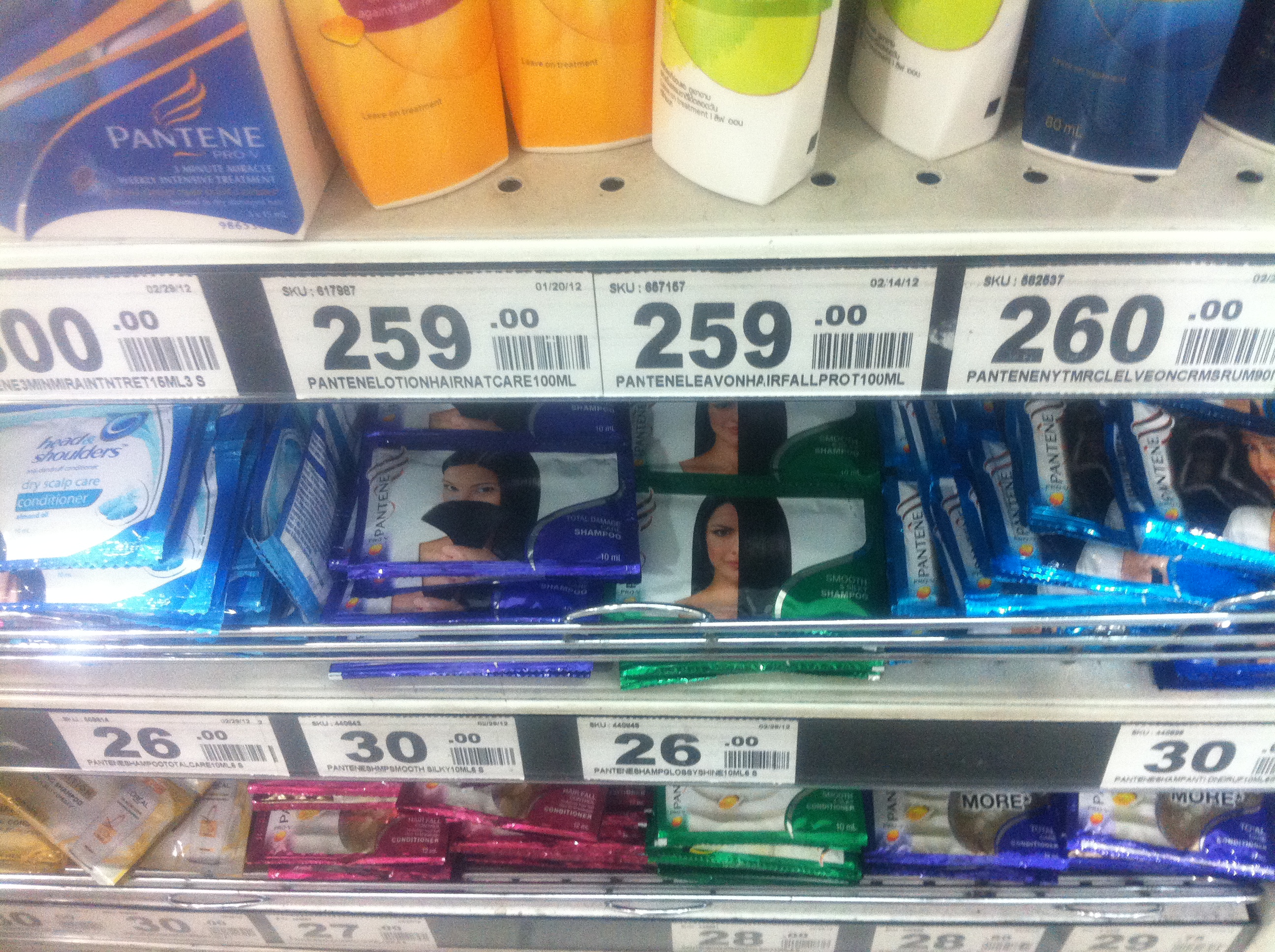 MASSTIGE. Thanks to sachets, the masses can get their hands on high quality products without saving up for days. Photo by Katherine Visconti.

The company has been adapting to the needs of the Philippine market, and profiting from it. "Maybe 60 to 70% of shampoo is being sold in sachets," estimated Macapagal.

He said Southeast is a profitable region for the company. "Half of the growth in the world comes from this region, the Southeast Asian region," he said.

"Everyone wants to smell clean," he smiled.

Macapagal said, "as a region there are higher per-capita sales of shampoo -- and very long hair."

Also, he admitted the market is fiercely competitive, which helps drive down prices. Unilever holds around 1/3 of the shampoo sachet market.

According to a massive market-research study undertaken by Proctor & Gamble and cited in the Wall Street Journal, "Women are fickle when it comes to shampoo. Only about a third of hair-care users say they stick to a single brand, according to market-research firm Mintel International, and about half say they switch between a couple of brands; the rest say they change 'constantly'."

In response, Macapagal said pricing and packaging become crucial factors in getting consumers to choose the company's sachets.

Why even buy the larger packages?

"It's about perceived value," said Macapagal, "Why do people buy Toyota versus Mercedes, they both bring you where you are going. We are attracted to packaging. It makes us feel that we have upgraded."

Though he said that for a large family or a busy professional, buying in bulk would likely be more convenient than going to the store each day for individual sachets.

Imagining the massive market for for sachets, a conscious consumer can't help but think about a growing pile of tiny foil packages filling local landfills.

After all, 1.3 trillion times a year, someone uses a Unilever product according to Macapagal.

On the other hand, the sachets minimize product waste, he said, citing a study where Unilever found that up to 20% of the product can be wasted in bottles that don't have the proper spouts.

"That should make a manufacturer like me happy," said Macapagal but he explained that in today's business atmosphere the customer demands culpability so the company does too.

He said Unilever has been studying waste in order to try to reduce it. Looking at the trash that ends up in landfills, Unilever found that more than 10% was plastic bags, while sachets, soap, detergents, cosmetics and wrappers from food made up less than 5%.

"The pressure is becoming much tougher and higher nowadays. We are addressing it by reducing the caliber and thickness of the packaging," said Macapagal. He said the flimsy sachets are actually easier to break down than the hard plastic used in bottles.

Unilever collects the sachets and turns them into materials for building roads, he said. Inside their factories, Unilever can burn the sachets at high enough temperatures that they instantly break down into their primary ingredients, including polyethylene, to fuel manufacturing kilns.

A flaw that remains is getting the sachets. It is difficult to convince scavengers to collect the small used packages when hard plastics, bottles, aluminum cans and wires are all bought by junkshops for much more tempting rates.

Unilever is supporting pilot programs to collect sachets from homes and schools, before they ever reach the landfill, he said.

He added that Unilever would collect not just their own sachets but every company's sachets since consumers don't care which company the package comes from.

He acknowledged, "the challenge now is really to scale it up 100 times, we really can't do it alone."

He was hopeful about harnessing social media to boost participation and awareness. "There is so much cascading that needs to be done in order to bring the news to every last citizen," said Macapagal. He pointed out that small things, like sachets, can create problems but small actions can help.

"We have one very serious agenda, growth. Tell me of one company that does not want to grow? We want to double the size of our business but growth at any cost is not really viable, particularly for the environment." - Rappler.com