MANILA, Philippines - As a Philippine property boom gathers pace, even Paris Hilton, Donald Trump and high-fashion house Versace are getting a piece of the action.

The good times are into their 4th year, fuelled by steady economic growth, Western firms offshoring jobs to the Philippines, the buying power of millions of Filipinos working abroad and low interest rates.

"It just so happens that today the stars are aligned... we have never seen the economy this bullish," said Antonino Aquino, president of Ayala Land, one of the country's biggest property developers.

Ayala Land is one of the main players in what industry figures describe as an unprecedented construction boom that is transforming the skyline of the nation's capital, as well as many provincial cities.

In Manila, formerly sleepy pockets such as the Fort army base and the rundown Eastwood industrial zone have become chic, new business districts, catering mainly for the fast-growing outsourcing sector.

At the Fort, Ayala Land this year broke ground on its $714-million One Bonifacio High Street project, which when completed in 2017 will host the Philippine Stock Exchange, a Shangri-La hotel, and retail outlets.

Across the country, more than 850,000 square metres (9.1 million square feet) of office space and 14,000 residential units will enter the market this year, property consultants CBRE Philippines said in a report.

It said many of the residential units catered for a growing middle-class on the fringes of Manila and other urban centres. 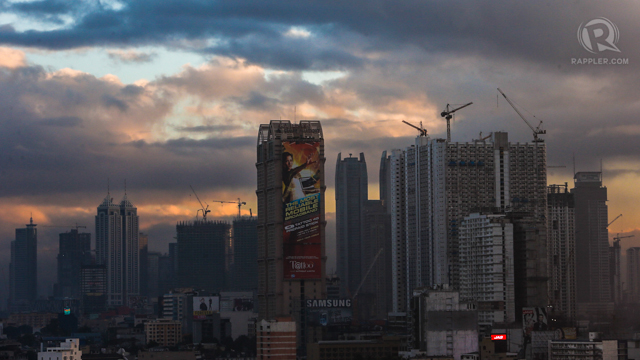 The building boom has also spread to hotels, shopping malls and casinos, triggering hopes of a long-anticipated take-off of the underdeveloped tourism industry.

Three of the world's biggest gaming industry leaders are building a $4-billion, 100-hectare (247-acre) Entertainment City complex of casinos on Manila Bay. The first of the casinos are set to open early next year.

Meanwhile, Trump, the New York mogul, has put his name to a $150-million, 56-storey, curtain-glass-walled Trump Tower that broke ground in the financial district this year.

The firm is putting up a nearby tower designed by the Versace fashion house -- the first of its kind in Asia -- featuring individual wading pools as well as its iconic Medusa-head brand imprinted on lamp shades and cutlery.

Industry players say the property boom reflects the overall status of the nation's economy as it picks up steam after decades of underperforming compared with many of its Asian neighbors.

The economy grew 6.4% in the first quarter, the stock market has surged 20% this year to hit all-time highs, and the country's credit rating has been bumped up to just a step below investment grade.

Aside from the macro economic picture, real estate analysts point to the outsourcing phenomenon as one of the key drivers of the property boom.
From virtually nothing a decade ago, outsourcing now employs more than 600,000 people and is worth $11 billion annually, according to the main industry association which is forecasting 15% growth in the years ahead.

Many of the skyscrapers are being built to cater for the outsourcing workforce, which performs a myriad of tasks from call centre duties to designing architectural plans for foreign firms.

Meanwhile, roughly nine million Filipinos who work overseas are sending large chunks of the $22 billion they earn -- equal to 10% of the nation's gross domestic product -- back home, often investing in real estate.

The frenetic building pace has some quarters anxious over a potential property bubble, with the global economic woes adding to concerns.
But Rick Santos, CBRE Philippines chief executive, remains bullish, in large part because of the expected continued growth in the outsourcing sector.

"As economies in the West tighten, global companies will see it in their interest to outsource their non-core functions to save on costs, " Santos told an industry briefing recently.

Ayala Land's Aquino also said local market had not seen the price bubbles that preceded crashes in other countries, where property values suddenly doubled or tripled.

"The price increases have been very close to or a little more than the inflation rate," Aquino said.

Trump Tower developer Antonio added: "We are confident that there's still a demand that has to be met." -
Agence France Presse