MANILA, Philippines – The Ultimate Spider-Man animated series may have ended in January, but kids can still get to know the web-slinging superhero through a brand new TV show.

Marvel's Spider-Man delves into Peter Parker's (Robbie Daymond) origin story – how he was bitten, how he discovers his powers, and how he adjusts to life as Spider-Man while dealing with being a teenager.

The series premiered in August in the US, but will premiere on the Disney Channel in the Philippines on October 14 at 10 am. In the meantime, Filipino fans can watch the series of shorts about Peter's powers that Disney released online.

In an interview with select Philippine media on Wednesday, October 4, co-executive producer Cort Lane and supervising producer Marsha Griffin spoke about the upcoming Marvel's Spider-Man and what fans – old and new – can expect.

There have been many animated series with Spider-Man, some of them quite good, in fact, Spider-Man is one of those comic book heroes with a good record for animated TV. What makes Marvel's Spider-Man, the new show, different from the ones that came before it?

Cort: I think that there have been a lot of good shows over the decade, but something unique that we've accomplished here is it's a very back-to-basics approach, trying to touch on the very core essence of Spider-Man when he first appeared in the comics, the realities of being a teenager and being new to these powers, and not quite being able to measure up in your own eyes as well as to those of the people around you, trying to become a better person and a better hero, and deal with the regular challenges of being a teenager. On the flip side, we've really modernized that story by putting him in a context with both technology and ressources and characters around him and storylines that reflect the world today. So that's what I think makes this show so special. Really touching on what made Spider-Man so unique in the beginning and also making it contemporary for audiences today.

Marsha: And I think this is our way to re-introduce a whole new generation to the actual origin story of how Peter Parker became Spider-Man. That's not necessarily something the recent animated series dealt with, because we would come into different parts of Spider-Man's life, different parts of Peter Parker's life, but this takes it back to the beginning, which a story that truly a lot of kids haven't seen before.

You guys are Spider-Man fans yourselves – were there any plot points or details that you knew you wanted to have in the series?

C: We wanted to tell an origin story and we did that in a very unique way with... We also knew that we wanted to start with day one, generally, like what was it like for him to get the powers, to get used to the powers, to create his web shooters, and work around it all? We just wanted it to feel very real, and grounded, and deliver a relatable teen character, you know? In terms of storylines and villains and all the other elements, we selected those that best served the story about Peter Parker that we wanted to tell. ANd so in some cases we picked villains and characters that appeared in the earlier days in the comics and in others we picked newer elements from comics that helped us tell that really important Peter Parker story. 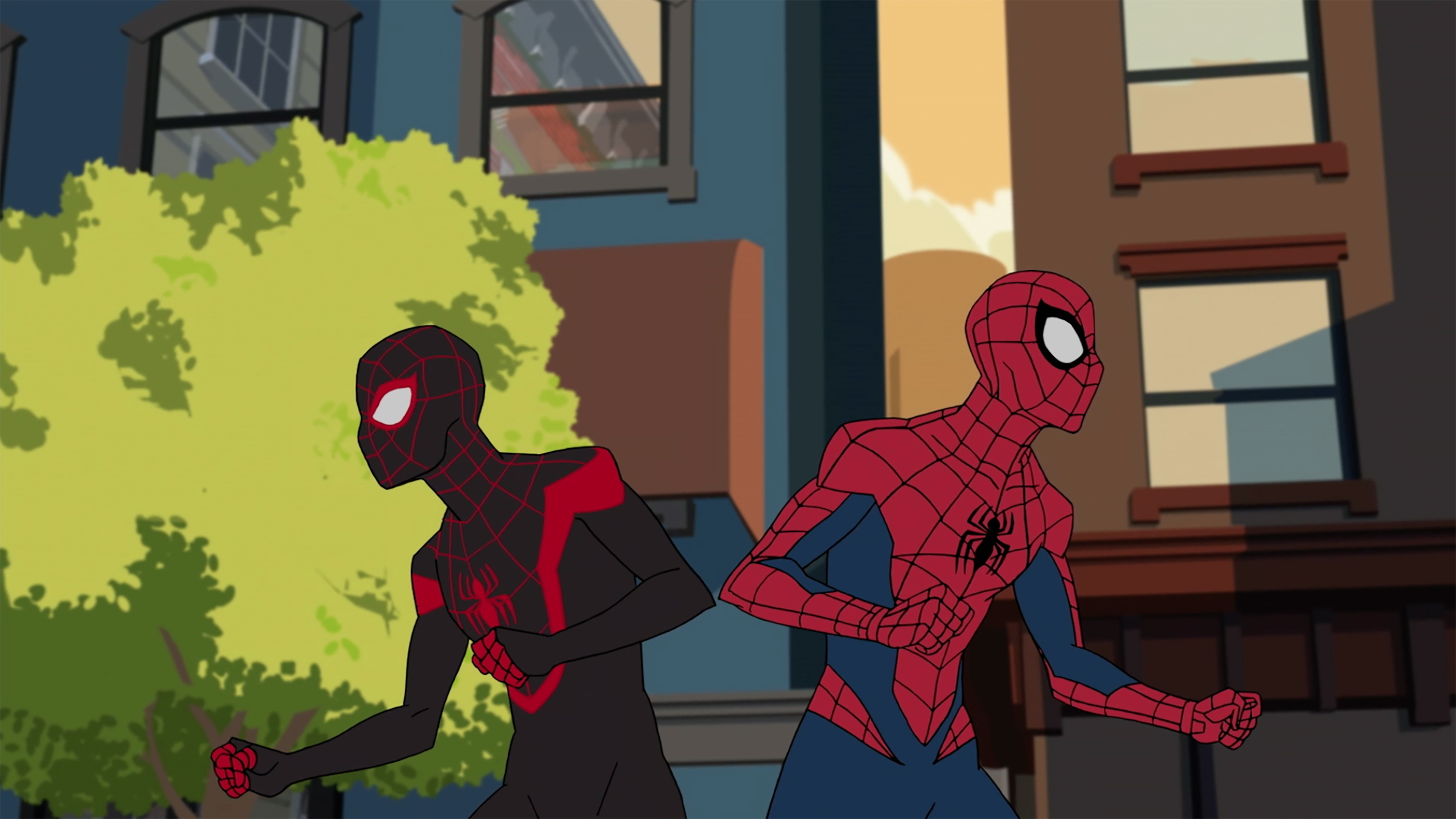 KID ARACHNID. When Miles Morales is bitten by an experimental spider and gains spider powers, Spider-Man must teach him the responsibilities of being a superhero.

M: Because this whole series starts with, it begins and ends with – even thought it's a Spider-Man story – it really begins and ends with Peter and so what we wanted to do was all the technology, all of the suits, the ... technology, and all the powers, that's great, and that's all icing on the cake. But the real heart and sould of Spider-Man has always been Peter's struggle and that was really where every story came from, trying to tell the best of Peter Parker's story and how could make everything work within that, but really Peter was the heart, and his friendship with Harry is really the heart and the soul of this.

Spider-Man Homecoming was very successful and there was with the Avengers in Civil War and everything, were there elements in that particular version, the one that people are seeing in live-action that they will recognize here?

C: Well, I think yes and no. We were developing the series really starting over two years ago. So the feature film was being written as we were developing the show, but I think... Marvel understood we wanted to tell a story about Peter Parker when he first becomes a hero and as a teenager, and that's a perspective that not a lot of superheroes offer, and that goes to the roots of the character, so there's a lot of similarities there, but obviously, there's a lot of differences between teh feature films and the animated versions as well.

You guys are bringing in familiar characters, but you're also bringing in new ones. Can we talk about some of the new characters in this version of Spider-Man? You guys are introducing Araña, why did you decide to have her in?

M: Well, I mean, whenever you're doing a story about superheroes they primarily target the male audience, they're usually male, they're usually young men or older men, and what we really wanted to do was make this version of Spider-Man also appeal to every age and every gender and there are really strong female characters within the universe that we wanted to take advantage of, that we wanted to show and showcase. So one was Gwen Stacy, and one was Anya Corazon, who becomes Araña or Spider-Girl, so we wanted to basically bring the female characters to be alongside Spider-Man and just to show that female superheroes can be just as great and just as strong and just as important as male characters.

There were a lot of previous iterations of Spider-Man before. What were some of the challenges you encountered while making this version of Spider-Man?

M: Well I think oe of the first things is that we never want to repeat ourselves. There's a great history to Spider-Man and paid tribute to it and there are certain things that we need to follow because the character is an icon. We also don't want to repeat ourselves, we want to give the audience a fresh take on the character, we want to give them a new experience every time while still respecting the great heritage and the great history that comes with it. 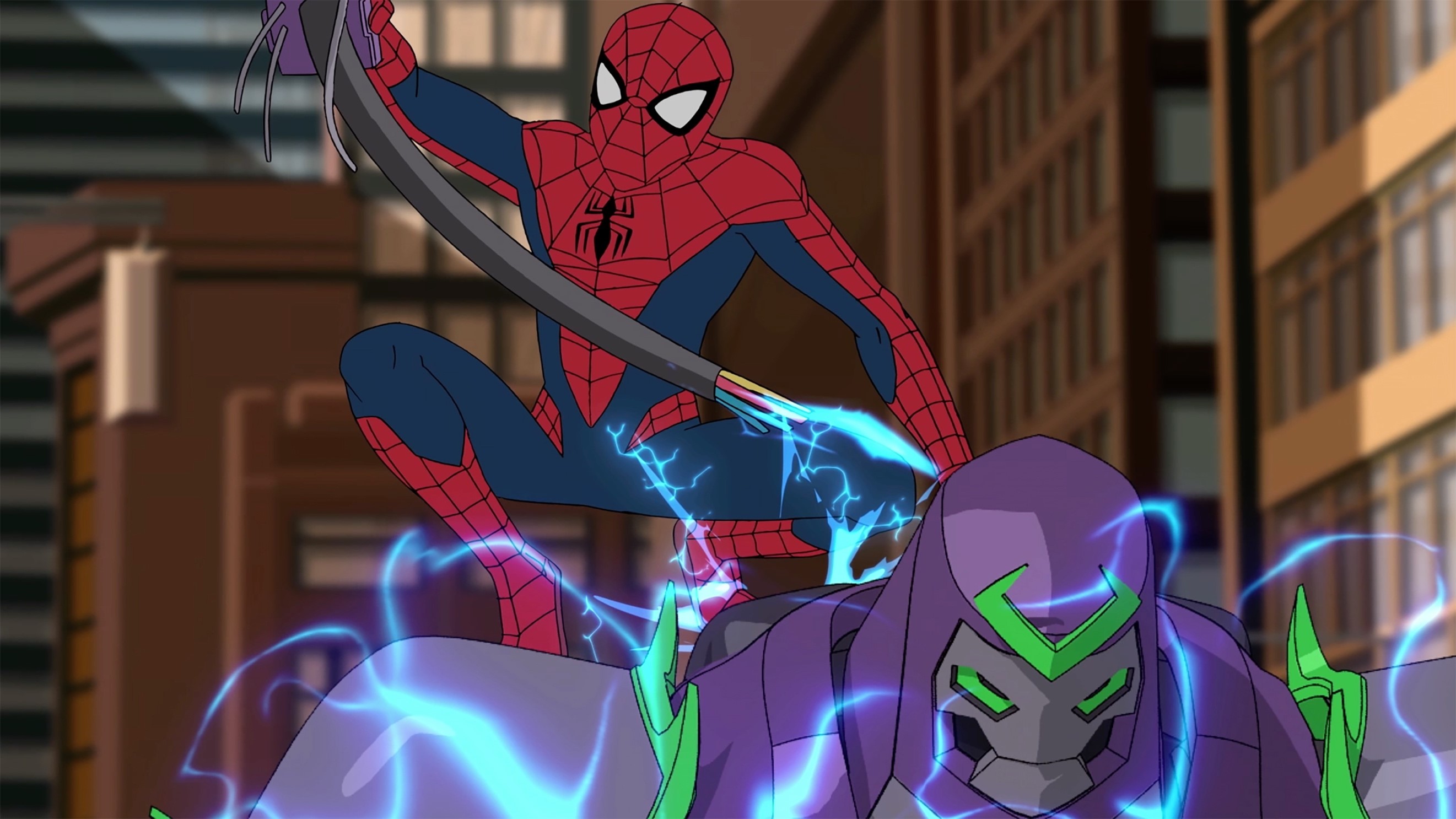 So that's a challenge, giving it a fresh outlook and a fresh point of view, while also respecting the grand tradition of the franchise, and that's always a delicate balance.

Why did you decide to release that part [about how Peter was bitten] online and not part of the show?

C: Well, I think it's really just – first, it's strategic because you can reach kids who might not be aware of the series unless they find these online prequels. They can also be ... on broadcast, but they can also be, as Marsha said, a fresh take at telling his origin story, we wanted to make sure that we could get that out there to as many kids as possible, because it tells all the core elements of his origin story that in a way is really relevant to kids today. So why not get it to as many people as possible? – Rappler.com