If there is anything films like George Lucas’ Star Wars (1977) and Christopher Nolan’s Interstellar (2014) have taught us, it is best to see a space movie either expecting to be bamboozled by sheer spectacle or to be consumed by an overwhelming blend of pompous science and sorrowful existentialism.

It is, therefore, pleasantly surprising that James Gray’s Ad Astra, a film set mostly in space but would only require its viewers to have elementary knowledge of how far Neptune is in our solar system, has profound spectacle. It does not distract its audience from the creative liberties it uses to push forward its narrative. It deepens its connection not with trite intellectualism but with transparent emotions. Ad Astra takes its viewers to deep space not to evoke distance from humanity but to enunciate the intimate fact that the connections that ultimately thrive in vacuum are the ones that are stubbornly around from the moment the we’re born.

There is nothing complicated at all in Ad Astra.

The plot is simple. Roy McBride (Brad Pitt) needs to travel from Earth to Mars to deliver a message to the celebrated astronaut H. Clifford McBride (Tommy Lee Jones), who also happens to be the father he has long thought to have died in a failed mission, to stop whatever he is doing that is possibly destroying the universe. He jumps on a rocket ship to the moon, and from there, takes a shuttle to Mars, where he will record a pre-composed message which will be transmitted to Neptune. Along the way to Mars, Roy encounters several adversities, including lunar pirates aboard repurposed buggies and a mysteriously abandoned research vessel.

The details of the journey are revealing of Gray’s bleak perception of capitalism’s dampening effect on humanity’s stark achievements.

The rocket ship that once served as hallowed ground fit only for men and women who have met the strictest requirements has been turned into a commercial vessel, complete with sleeping comforts at a price.

Worse, the moon is now a tourist trap – just another cashcow for conglomerates to exploit. Roy woefully resents the evolution of man’s ambition to stretch the frontier of his capabilities and capacities, imagining how his father would have reacted to how all the hard work he expended only resulted in the extension of humanity’s drab mediocrity.

The emotions are even simpler. Gray allows Roy to broadcast his thoughts, often through the psychological tests he every once in a while needs to take to determine his fitness for the mission, but mostly through random mutterings that transforms into montages of memories of the past that allow the viewer glimpses of his former life. The film does not need to mask its feelings, knowing fully that the best spice is the bluntest of humanity as expressed through the confessionals of a stoic and solitary spaceman. 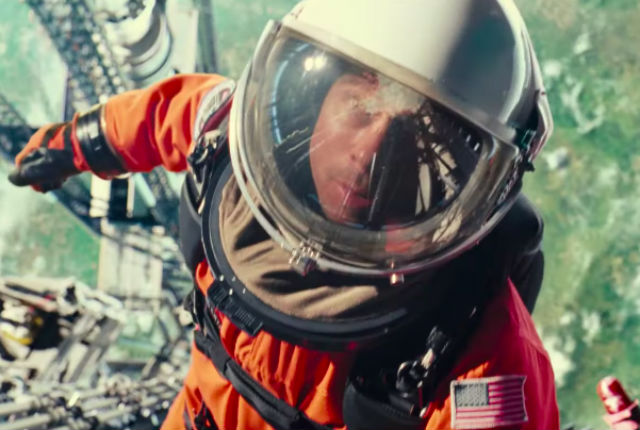 Unbothered by intricacies and pretensions

Ad Astra, amidst its thirst for its main character’s repressions and agitations, is unbothered by intricacies and pretensions.

It fully embraces the tropes and excesses of the space-set drama, indulging in the suspenseful pleasures of action sequences or horror set-pieces within its internal and intimate explorations of the human condition. It doesn't allow rote and exhibitionist philosophizing, with its emotional clamor boomeranging back to the issue of the father’s gnawing presence in the son’s personal and professional existence. It is a generous film, easily navigable, fervently entertaining, and precisely human.

It dazzles with its images of a distinct but still familiar near future or of somber space and all its terrible mysteries. But it routinely reverts to show in penetrating close-up the weathered face of Pitt, almost tempting its viewers to commit to the notion that part and parcel of this impenetrable universe is the pains of an abandoned son. There is discernment in the immense beauty of Ad Astra. Each rigorously constructed frame bleeds with sentiment. It is close to impossible not to be in awe of how quietly powerful everything is.

Ad Astra is a marvel.

It isn’t a film that you admire from afar, since its effect and affect are universal. It reaches for the stars only to arrive at the very hopeful point that even the dangers of the universe cannot disrupt or distort our imperfect but invaluable humanity. — Rappler.com