The colors of forgotten dreams

MANILA, Philippines – Jose Javier Reyes, for all his faults as a director, has earned his renown for one singular artistic characteristic, which is his ability to enshroud his works with a distinctly middle-class perspective. His astute interest in the clear lines that divide Philippine society into various socio-economic classes are often depicted through satire, as in "Mga Mumunting Lihim" (Those Little Secrets, 2012), where the friendship of four middle class women is abruptly tested by deceit, envy and various fleeting plights, or in "Kasal, Kasali, Kasalo" (2006) and its sequel "Sakal, Sakali, Saklolo" (2007), where the concerns of the marital life of a middle class couple are mined for comedy.

His best romances are the ones draped with class issues. "May Minamahal" (1993) has affluent Aga Muhlach falling in love with Aiko Melendez, the lowly daughter of a jeepney driver. Instead of depicting the cross-social class love story with fairy tale allure, Reyes injects realistic observations as to the very apparent lines that have been punctured because of the two lovers’ affectations. "Kung Ako na Lang Sana" (2003), on the other hand, tells the atypical love story of Aga Muhlach’s financially stable playboy and Sharon Cuneta’s hardworking entrepreneur, documenting along the way the worries and problems of a privileged generation.

Whenever Reyes decides to tackle the issues of the impoverished, such as in "Live Show" (2000), which is about men and women forced into performing live sex shows for survival, the perspective is evidently middle class, with depictions of oppression and struggle shrouded with pity, regret, shame and seriousness that only a repentant member of the ruling class can offer. "Ano ang Kulay ng mga Nakalimutang Pangarap?" (What are the colors of forgotten dreams?), which narrates the life of a Teresa (Rustica Carpio), a domestic helper who has spent most of her life serving several generations of a middle class family, is possibly the most persuasive of Reyes’ expressions of middle class guilt.

Domestic servants have become a necessity for most middle class households, where both parents become breadwinners to maintain a lifestyle. The servants, instead of being regarded as typical employees, become part of the household, taking on tasks from cleaning to raising children in the absence of their parents.

Unfortunately, their very vague position within the family unit deprives them of certain securities. Emotional attachments become too irresistible. Monetary compensation becomes a non-issue. In the end, however, when economic circumstances are weighed alongside de facto relationships, the former takes precedence, resulting into an oppressive tradition that we can only quietly accept. It is perhaps our undeniable familiarity with this oppression that makes Reyes’ film genuinely affecting.

Reyes complicates this depiction of middle class oppression by situating his tale during the twilight of Teresa’s career, when she has become close to becoming useless to the family she serves. The family’s remaining members, Stella (Jackie Lou Blanco), Vince (Bobby Andrews), and Andre (Ryan Agoncillo), have all migrated outside the Philippines, leaving the family mansion for sale. Amidst negotiations with brokers and buyers, they become confronted with something they have glaringly omitted: what happens to Teresa? 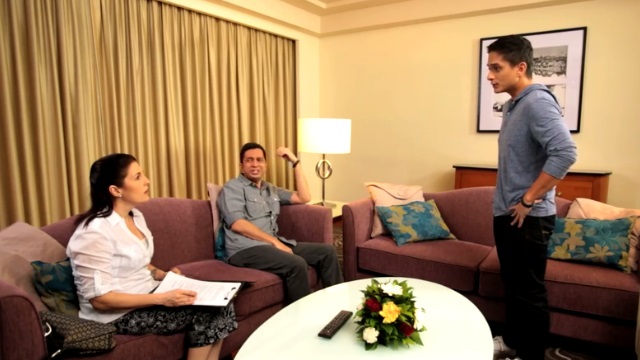 What happens to Teresa? Screen grab from the trailer

Reyes depicts the siblings unequally. Stella and Vince seem intent on moving on, regarding Teresa’s situation a mere diversion from the goal of disposing all of their family’s assets in the Philippines. Andrew, however, has more benevolence in his affairs with Teresa. Despite that, Reyes approaches the moral dilemma in his narrative with logic and reason. He ensures that no inherent antagonists arise, and instead, all acts and inactions are mere results of a situation that all characters find themselves trapped in.

Melodrama is Reyes’ weapon of choice. "Ano ang Kulay ng mga Nakalimutang Pangarap?" is effectively manipulative. Flashbacks are utilized to indulge in key scenes that enunciate Teresa’s sacrifice for and investment in the family. From Carpio’s resplendent performance to the howling musical score, the film immediately urges pity for the aging woman whose illusions of being part of the family she has served is about to shatter. Pity, after all, is but a by-product of guilt. It is most sincere when there is an acceptance of a wrongdoing. When it is sincere, it prods compassion. Reyes, true to his mission of exposing either the excesses or the shrouded inhumanity of his class, aims to use his film to move for compassion.

Thus, subtlety is not an option. The film ends with Teresa, alone and on the verge of confusion, looking into the camera and at the audience. She probes for pity and for compassion. At the very least, she probes for guilt from the social class who can afford to watch her life’s sufferings but cannot afford her the humanity she deserves.

Francis Joseph Cruz, or Oggs, litigates for a living and writes about cinema for fun. The first Filipino movie he saw in the theaters is Carlo J. Caparas’ "Tirad Pass." Since then, he’s been on a mission to find better memories with Philippine cinema.