The dream sequence ends in absurdity, with Barbs, exchanging her long locks and elegant gown with a cleaner cut that matches her tight polo shirt, getting stabbed with a pair of scissors after a bit of a quibble with confused Trisha.

Absurdity has always been a key element of films like Die Beautiful, films whose main draw to the general public is the comic allure of a persistent gender-bender narrative.

The impression that gender and sexualities that transgress physical features is absurd and therefore funny is a somewhat unfortunate result of decades of very broad comedies, mostly headlined by Dolphy, Joey de Leon or Roderick Paulate. The tradition continues up to this day with the movies of Vice Ganda. What separates Lana’s film is that while it still appropriates such fascination for hilarity, it also uses it as a diving board for not just intellectual discourse on sexuality but also for empathy. 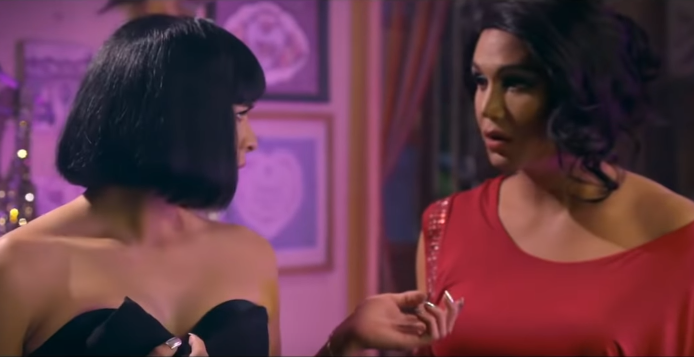 GUIDANCE. In a dream sequence, Trisha makes an appearance to Barbs.

It is less elegant in terms of structure and execution, with its sequences strung together like episodes of a sitcom rather than a feature length film. Its intentions are also more clearly geared towards selling its comedy rather than shaping an affectingly human story out of outrageous circumstances. Despite those apparent quibbles, Intalan’s film still resonates with its subtle but coherent intent to break boundaries. The film earns both quick chuckles and novel charm, presenting its tale of a transwoman coming to terms with the repercussions of her blossoming identity with equal parts pageantry and principle.

At first, it almost felt like Del Rosario lacks the exuberance that made Bables such a scene stealer in Die Beautiful. Thankfully, as it is slowly revealed that Barbs is less a comic relief and more a character of diverse motivations, Del Rosario comes to his own, delivering a performance that is not just worth the spectacle of being transformed into a convincing transwoman but also the sincere understanding of the crises that his character is undergoing.

By the film’s end, Del Rosario has more than just convinced the film’s audience that his interpretation of Barbs is inclusive not just of the character’s capacity to entertain but also her complex and beautiful humanity. 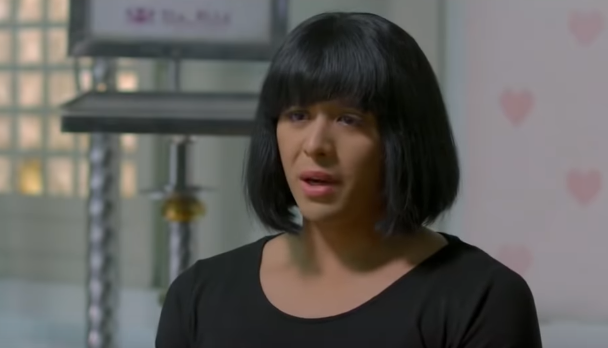 Born Beautiful is far from being a perfect film.

Some of its jokes don’t land, while a few venture towards being disappointingly lowbrow. The romantic angles aren’t fleshed out, making its indelible final frame where we see Barbs content while wrapped in the embraces of the people who share her more a resounding slogan for the infinite bounds of love rather than a satisfying emotional closing. The film is also a bit underwhelming visually, with a lot of the film’s scenes looking rather drab given the context of the film’s mix of color and shadow.

REMINDER. Trisha (Paolo Ballesteros) makes a special appearance in the movie to remind her friend to move on.

However, what’s undeniable is that Born Beautiful has a humongous heart.

It confidently skirts norms without losing track of its need to delight. It refuses to be boxed by morality. The solutions to the many dilemmas it presents are never hinged on the societal expectations that it fervently attempts to break. Its scattered plot brilliantly converges towards a single point, which is to celebrate the limitlessness of loving. – Rappler.com