'Four Sisters and a Wedding': No special occasion 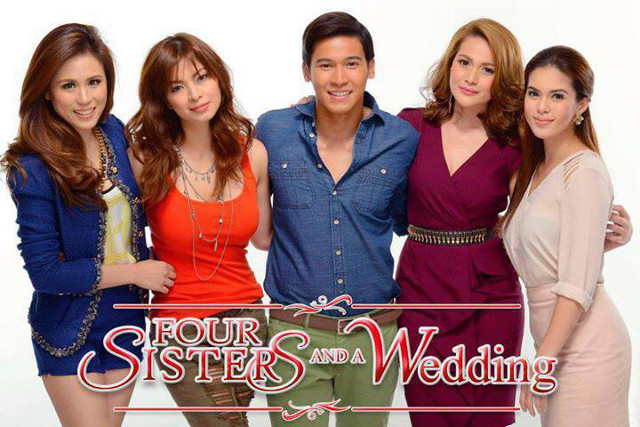 CHEESE. From its great cast, this could have been a really great film.

MANILA, Philippines - As I tried to exit the theater after watching "Four Sisters and a Wedding," an elderly couple walking right in front of me stopped stiff. The woman had gone rigid, as if in fear. I leaned to see past them, and saw that a video crew was filming moviegoers leaving the theater and asking them for reactions. The man coaxed her, his voice with a touch of gruffness, "Kailangan mo lang naman sabihin na pangit, tapos ok na." (All you have to do is say it's a bad movie, then we can get going.)

If only it were that simple for this review. I find myself conflicted because I have to admit that I agree with the old man's assessment of the movie. But there is a fair amount of good stuff in the movie, too. There's not so much that I would go and recommend it to friends, but I do understand why people would dig this flick, and I am sure that those looking for a quick kilig fix will find what they want here.

There's a good set-up. We have the Salazars, a well-educated family made up of matriarch, four sisters of similar age, and a youngest brother who is the baby of the bunch. The titular sisters have been estranged, with two (Toni Gonzaga's Teddy and Bea Alonzo's Bobbi) going abroad. Furthering the estrangement is the complication of Angel Locsin's Alex hooking up with Bobbi's douche of an ex-boyfriend (Bernard Palanca) after she has left the country. The youngest sister, Gabby, played by Shaina Magdayao, doesn't have issues beyond the mother nagging her to get an MA and move up in the teaching world.

Couple of things to take note of here. First is even without the catalyst for the film, the wedding, we are provided with some compelling family dynamics. The close-knit sisters torn apart by the diaspora makes for rich content.

Unfortunately, we only get bits and pieces of it, and the focus moves more towards the bad relationships with men rather than possible broader concerns. Second is that the men in this film are largely, to put it simply, crappy. They aren't very good to the women in their lives, treat them pretty badly. Even the supposedly marriageable Sam Milby character, at a certain point, just dumps his daughter on Bobbi, saying that she'll take care of his daughter if he really loves her. I just felt that while there were strong women represented in this film, they deserved a fair amount more justice, which would have come in the form of them expecting more of their men.

Anyway, the catalyst of the film is baby bro CJ (Enchong Dee) who decides to marry a girl he has known for only three months. This gets the sisters in a tizzy, and they are forced to put aside their differences and come home for the two weeks of preparation before the wedding. They decide that being the good Ates that they are, it is their responsibility to prevent the wedding.

Now at this point, there are two ways that this film could go. It could go in the direction of a crazy fun romp, with all kinds of antics ensuing as they try to stop the wedding. The other is that they go into a deeper exploration of what it is that makes them want to prevent this wedding, calling into question the various issues and weaknesses of each character. Either one of these directions could have made for a really good movie.

One such issue is the reason for their not liking the fiancee. First is that they think that she is unattractive. Which, though mean, is I suppose also a normal if superficial reaction. The second concern proves more problematic. They dislike her because she is tacky and nouveau riche. While the film portrays her as guilty on both counts, I think that the larger problem would be the implicit negative representations of class here. Just like everybody else in the theater, I was laughing at Carmi Martin's hilarious cartoonization of the nouveau riche. But further consideration left me thinking that the whole tenor of the portrayals of the various social classes was off. It was played for laughs, but it was largely insensitive and lacked sympathy.

I think that Angel Locsin and Bea Alonzo were on fire with their acting, and that helped to save the film. Their performances lent an emotional gravity to the film which made it watchable. Toni Gonzaga seemed both over- and under-directed. She had moments when she was more cartoon than person, and others when she could have benefited from guidance. She had moments, when she played off her co-stars, which showed her chops. Shaina Magdayao, in her few moments, was effective. Shame though that she wasn't given more to do. Coney Reyes, as the matriarch, served as a great anchor.

I saw from the performances of these good actresses that this could have been a really great film. It was a great cast. But it was uneven. The stories should have been interwoven, but instead, we just jumped between characters. There were so many strands of story, all of them potentially rich, that none of them were fully explored. The film ends with a massive crying scene (hilariously long, with a badly placed maid character doing over the shoulder reaction shots) followed by another crying scene, and then a deus ex machina. Its final parts fall on cliches and the requisite cheesy love lines, which we hear enough of on late night radio. Oh well. - Rappler.com

(Carljoe Javier is at the faculty of English and Comparative Literature at UP. He is also an author, and among his books are The Kobayashi Maru of Love, the new edition of which is available from Visprint Inc. His upcoming Writing 30 will be available as an ebook at amazon, ibookstore, b&n andflipreads.com.)