'The Last Interview: The Mayor Antonio Halili Story' review: Avoid it like the plague

It isn’t just the glaring fact that Caesar Soriano’s The Last Interview: The Mayor Antonio Halili is an almost lifeless film that makes it utterly reprehensible. It is also the questionable driving force behind it that renders it ultimately toxic. It is just all sorts of wrong.

Starting with the obvious

Let’s start with the obvious.

The Last Interview drably turns the life of recently killed Mayor Antonio Halili into a syrupy melodrama, starting from when he was a rascally kid whose rascally ways are lauded by his rascally father to when he grows up to turn into a Duterte-like city mayor whose most famous deed is to shame suspected criminals by having them walk around town with placards of their crimes hanging from their necks. There’s not a tinge of flair in the way Soriano commits his suspect version of Halili’s narrative to cinema. It is as plain as cardboard and as bland as chalk.

The performances here are consistently preposterous.

Halili is played here by John Estrada whose uninspired impersonation of the mayor is limited to looking stern and stoic while dishing out his harsh commands and every now and then, letting out a timely cough. Estrada fails at shaping the mayor into a sympathetic character and only puts a painful spotlight at how fake and suspect everything in the film is. Ara Mina, who plays Halili’s wife, is woefully unremarkable, limited mostly to hysterical wailing or looking pretty and dainty in the background.

Actually, all the actors and actresses in the film, from Phoebe Walker to Mon Confiado, are all forgettable, as they should be. There is probably nothing worse for a performer to have his or her resume tainted by being linked to lousy propaganda. 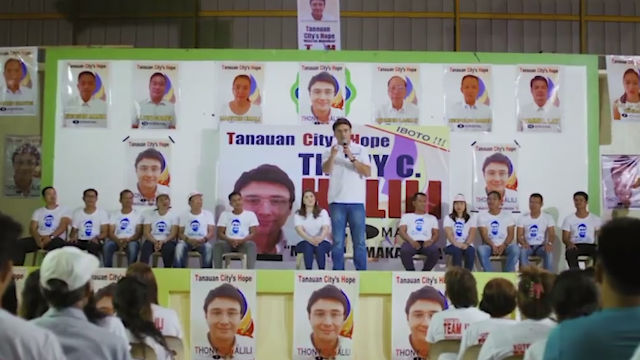 ELECTION. A scene from the movie The Last Interview.

A film about bad journalism

If only The Last Interview stopped at being a meandering championing of Halili.

Sadly, Soriano decided to frame the narrative as supposedly the last interview by him of the mayor before he is gunned down. The Last Interview isn’t content at being propaganda. It also wants to be a film about bad journalism, with Soriano, who plays himself not as a film director but as a journalist, clearly revealing how not to conduct an interview. What the film shows is a journalist being maneuvered by his subject instead of really digging out the truth. To make matters worse, in one latter scene, Soriano extends an opinion that puts the interview into question.

There has been a recent flurry of films about journalism like Tom McCarthy’s Spotlight (2015) and Steven Spielberg’s The Post (2017), perhaps in reaction to the times where facts have been overshadowed by slants. In the Philippines, most of the films made about journalism center on both the physical and ethical considerations of the job, with Joel Lamangan’s Deadline: The Reign of Impunity (2011) and Mike de Leon’s Citizen Jake (2018) shining a light on the subject.

The Last Interview is just counterproductive.

It utilizes the subject of journalism not to deliver facts or to create discourse. It only wants to put a personality and his divisive tactics and politics in a pedestal. It is almost a blessing that Soriano’s film is awful and unwatchable since it at least makes its vicious point undesirable.

Here’s just one final tip about The Last Interview. Avoid it like the plague. — Rappler.com