'Lost in Space': A family drama drenched in science fiction

When one watches Lost in Space, one must remember that while the sci-fi elements are evident and the set is astounding, it’s a family drama guised in science fiction, more than anything.

Lost in Space is based on a 1960s series of the same title. The premise excites. The Robinson family, along with the rest of the chosen ones, travel in outer space to seek life in another planet and in another galaxy – Alpha Centauri – as part of a colonization project.

It becomes problematic when an unfortunate incident pushes their ship off course and passengers are forced to crash land on an unknown planet. Fortunately, the planet is habitable for humans, but that doesn’t mean that the Robinsons — and other people who have found refuge there — are completely off the hook.

As aerospace engineer Maureen Robinson, Molly Parker is stern, thorough, but a tad too demanding. This mindset sometimes blurs the line between her role as a mother and a leader of her pack. Parker once again proves that she is effective at portraying strong, surviving women, as previously seen in her performances in Deadwood and House of Cards. FAMILY. The Robinson family embarks on a different adventure in the show.

Taking on the role of Maureen’s estranged husband John, is Toby Stephens. Stephens is convincing at exhibiting the qualities that helped make John Robinson a respected war veteran: courage, leadership and compassion. He joined the voyage to protect his family against perils of an unknown galaxy, despite the fact that he has a strained relationship with his wife and children.

As Will Robinson, Max Jenkins sheds his confident and engaging real-life persona to portray a smart, anxious and surprisingly courageous boy who feels he doesn’t deserve to be one among the best and the brightest that were chosen to be part of the voyage. At times pitiful but always endearing, Will slowly realizes his previously untapped potential in the unknown planet.

Maureen’s eldest, Judy, is Will’s complete opposite. She seems to always know what to do. She never hesitates to find and provide solutions. Her expectations of herself are about as high as her mother’s; and her disappointment in her adoptive father (Judy is Maureen’s biracial daughter from a previous marriage) seeps through the surface no matter how she tries to keep it at bay. As Judy, Taylor Russell is strong and self-assured one moment and frozen in terror and traumatized the next; something you don’t exactly expect from a young woman with enough smarts and strength of character to become a practicing doctor at only 18 years old.

Arguably one of the most entertaining characters among the Robinsons is Penny - the quintessential middle child caught between the eldest whom everyone respects and the youngest who receives special treatment. Played by Mina Sundwall, Penny is tough, funny, and struggles to find her place and value in the family.  She finds it in the most unfavourable and dangerous circumstances.

The Robinsons are interesting not only because they have been given the opportunity to travel to another galaxy. They appeal to viewers because of their imperfections. For one, Maureen and John are essentially separated as a couple, but being part of the Colony has forced them to see beyond their differences and work together for the sake of their children. The children, on the other hand, experience their own respective personal battles that they must surpass in the face of danger.

Three other very interesting characters intersect the lives of the Robinsons, namely Don West, the smuggler with the heart of gold; Dr. Smith, a mysterious and scheming  woman whose only apparent purpose is to create trouble for everyone; and the Robot, a shapeshifting and sentient creation that becomes Will’s loyal servant and friend.

While Dr. Smith doesn’t appear to have much value apart from being a troublemaker, she is sinister, manipulative and beguiling as portrayed by Parker Posey. 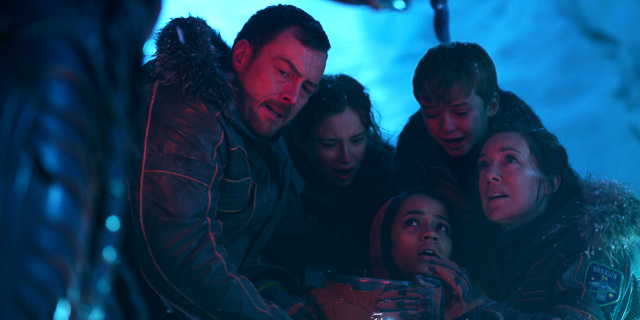 STRUGGLE. The family encounter a lot of challenges along the way.

Lost in Space is beautiful tale of compassion, survival and strength of the human spirit. It has heart. It’s a show an entire family can watch together and possibly bring them closer afterwards.

The show is exciting. It builds momentum from the onset; the type that pushes you to the edge of your seat.

In terms of production value, it is certainly abundant in eye candy; from the spaceships and the robot to the images of the unknown but habitable planet, and outer space. It’s something that both kids and adults could enjoy watching together.

While having a heart and relatable situations as part of the plot is a good thing, it appears that the build-up from the first five episodes deserves perhaps a quicker and more engaging treatment. Every so often Penny would inject some sarcastic or witty remark to break the somber atmosphere, but most of the time, it can be too heavy.

This reboot is attuned to the times, but tends to dwell so much on the family drama (at least based on the first few episodes), which the hardcore sci-fi geek might not necessarily appreciate. While too much excitement and action might not be a part of the show’s DNA, it might certainly give the show a much-needed boost and its viewers, better sustained interest.