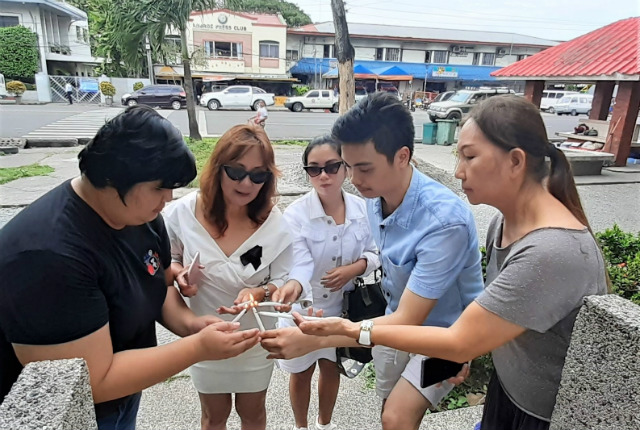 JUSTICE. Andrea Jayme, her daughter Hina Sofia Danielle Bianca Tugot (2nd and 3rd from left), along with local journalists, light candles and offer prayers at the Marker for Fallen Journalists at the public plaza in Bacolod City on December 19. Photo by Marchel P.

BACOLOD CITY, Philippines – A day before human rights lawyer Concepcion Brizuela was set to fly to Maguindanao to join the convoy of Esmael "Toto" Mangudadatu in 2009, she had a premonition of the ambush.

This was according to her younger sister, Andrea Jayme, who told reporters after the handing down of the Ampatuan massacre verdict on Thursday, December 19, that she herself had wanted to accompany the lawyer on the trip but Brizuela stopped her.

Jayme said she would always join her sister in court hearings “because I love to see her talk. She was our idol. She was a lawyer for the poor and the masses.”

“I wanted to join her but she said no. She told me, ‘basi duwa ta ma ambush (both of us might be ambushed).’ She had a premonition,” Jayme recalled. She added her sister was hesitant to go at first.

Brizuela, before leaving for Ampatuan town on Sunday, November 22, 2009, bidded their mother goodbye in Kidapawan City and told her she's be back the next day by lunchtime.

She did not return.

Brizuela was among the 58 victims shot to death on their way to the provincial poll office for the filing of the certificate of candidacy of Mangudadatu for governor against Andal Ampatuan Jr., son of the governor at that time, Andal Sr. The Ampatuan patriarch, alleged mastermind of the massacre, died in 2015 while serving time. (WATCH: Trial of the decade: Highlights of Ampatuan massacre case)

She said her sister and Genalyn were together a day before the ambush. They even went to a salon, she added.

Jayme said her sister was able to text a local councilman to inform him they were abducted, but she did not know where they were taken.

Jayme said her sister was a champion of those who have less in life. “No amount of money can pay the life of my sister,” she added.

On Thursday, December 19, Judge Jocelyn Solis-Reyes handed down the verdict against the suspects after 10 years of trial. (TIMELINE: The long road to justice for Ampatuan massacre victims)

The local chapter of the National Union of Journalists of the Philippines, in a statement, said the acquittal of Sajid Ampatuan is “very disappointing and unacceptable.”  The group added: “But still, Judge Reyes' ruling on Andal Jr. and Zaldy is commendable. We wished for her safety."

Jayme joined local journalists in watching the televised coverage of the promulgation of judgment at the Negros Press Club office here.

They also lighted candles and offered prayers at the Marker for Fallen Journalists at the public plaza in Bacolod City shortly after the promulgation of the Ampatuan case. – Rappler.com