Binay will wallop Aquino in 2016 – survey

Meanwhile, if Binay were to battle it out with the Liberal Party's presumptive standard bearer – Interior Secretary Manuel Roxas II – in a one-on-one, the President's party mate would suffer worse.

The survey results show Binay will beat Roxas, 69% versus 29%, nationwide. The regional breakdown of the results shows that Roxas will lose even in his bailiwick, the Visayas.

Both Binay and Roxas planned to run for president in the 2010 elections. They gave way to then Senator Aquino. 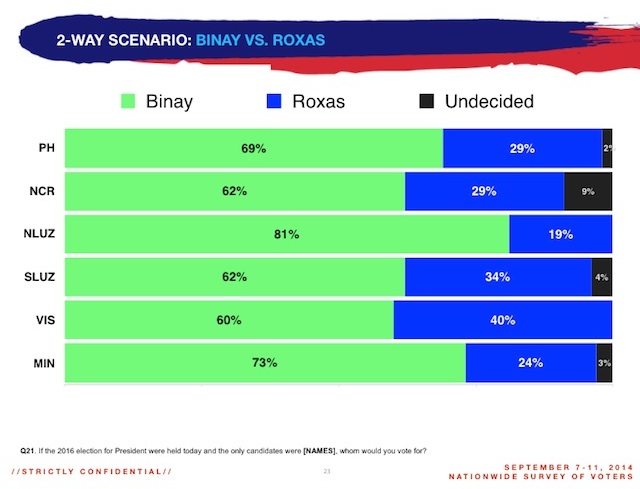 A survey by another polling firm, Pulse Asia Research Inc, show that Binay continues to dominate the 2016 presidential race, although his numbers have plummeted a significant 10 percentage points as a string of corruption allegations were made by his critics and political rivals in the Senate hearings. The Pulse survey was conducted September 8-15, around the same time as the Laylo survey. (READ: VP Binay's lead in presidential poll drops)

Binay acknowledged that the Senate probe is hurting his planned candidacy. In media interviews, however, Binay raised questions about the longer list of possible candidates that was used in the latest Pulse Asia survey than the list in the survey before that, thus the drop in his numbers.

(First of all, a lot of names were added to the [list of] presidentiables. As far as I know, there were 15 names.)

Laylo, who did the national survey on presidential poll scenarios, used to be with the Social Weather Stations. He became the resident pollster of Malacañang during the time of President Gloria Macapagal-Arroyo, then of the Manila Standard during the 2010 election period. Laylo's clients include businessmen, private companies, government agencies, funding agencies, media outfits, and politicians from various political parties. – Rappler.com