GOOD TIMES. The Marcos couple with vice presidential candidate Arturo Tolentino as they open their campaign for the 1986 snap elections.

MANILA, Philippines – When Ferdinand “Bongbong” Marcos Jr was 26, living in Hawaii after his father was deposed by a people power rebellion in February 1986, a first-hand account shows that he was privy to the Marcos deposits in the Swiss banks, particularly Credit Suisse. It is not clear if he knew the amounts involved but these were estimated at $10 to $20 billion, alleged to have been illicit wealth. Part of this has since been transferred to the Philippine government.

We are publishing excerpts from the narration of banker Michael de Guzman, culled from his testimonies to Congress in 1989 and 1997 and published in the book, “Endless Journey: A Memoir” by Jose Almonte as told to Marites Dañguilan Vitug. This sheds light on what the young Marcos, now a senator and candidate for vice-president, knew of part of his family's wealth.

De Guzman was a high-flying banker who headed an investment firm in Manila in the late 1970s and early 1980s. He later formed a bank in Austria and spent much of his time there. He had known Bongbong and even hosted him once when he visited Vienna.

De Guzman testified in 2 Congressional investigations on “Operation Big Bird,” a sting operation to recover the Marcoses ill-gotten deposits hidden in the then secretive banks of Switzerland.

“Operation Big Bird” failed because key persons in the government of President Corazon Aquino foiled it—despite her support. They did not trust Almonte, who, at the time, was the leader of the clandestine project, as well as De Guzman.

One of the first things De Guzman did, immediately after the EDSA rebellion, was to seek a meeting with the Marcoses. His aim was to acquire letters designating him to transfer the Marcos deposits to his bank in Vienna before these were frozen by the Swiss government. He would then turn these over to the Philippine government and be paid a certain percentage of the total find.

At the time, President Marcos was ailing. In the temporary quarters of the Marcoses in Hickam Air Force base in Honolulu, there seemed to be nervousness in the air and some uncertainty about the state of their enormous Swiss deposits. This contributed to De Guzman's initial success – he came at an early time and made the first offer to rescue their wealth.

The Marcos couple agreed to see him and gave him 2 letters of authority. Bongbong, in a way, served as his parents’ representative. He met with De Guzman twice.

The senator has given conflicting answers on this episode of his life. Last year, when asked by a TV reporter, he denied meeting with De Guzman about recovering his family’s Swiss bank accounts.

Earlier, though, in 2012, he admitted it during a question-and-answer with the Foreign Correspondents Association of the Philippines. 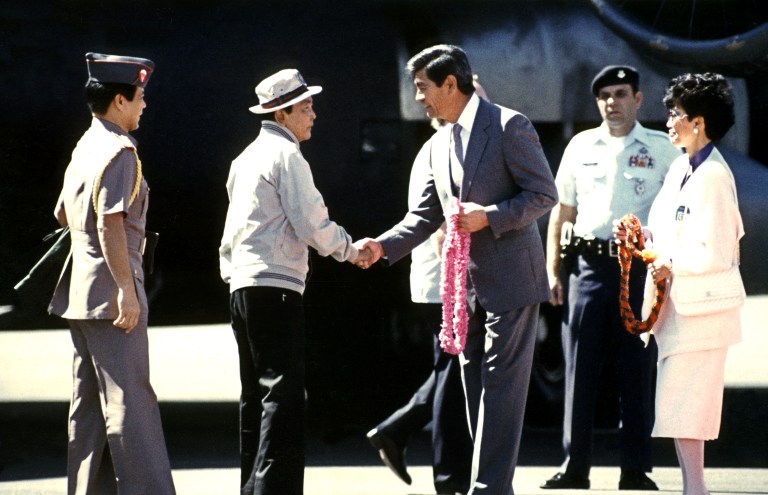 Here are excerpts from De Guzman’s account of his meetings with the Marcoses in Honolulu, March 1986:

“Mr. and Mrs. Marcos agreed to see me one evening and Col. [Irwin] Ver was asked to accompany me to Hickam Base. [Victor Bou] Dagher [a Lebanese, De Guzman’s business partner] and I knew that we were already getting very close and I had to be very convincing in my presentation to the Marcoses.

After we entered the main gate of the Base, we passed a rather long stretch of road, similar to Clark Field, before reaching the housing area, a row of small bungalows. Col. Ver and I walked through a dark, unlit entrance to the house and we passed two Secret Service personnel.

As I entered the house, I saw Mrs. Marcos sitting the in the sofa of the small living room…I was asked to sit by the dining table across from the living room…

A few moments later, Mr. Marcos came out of his room and Mrs. Marcos joined us…Col. Ver stepped outside the house, where he waited.

Mr. Marcos appeared very weak. It was Mrs. Marcos who opened the discussion by asking me what news I had to tell them…I started by informing them that I had strong reasons to believe that the Swiss banks and the Swiss government would take measures to freeze their deposits.

At that point, Mrs. Marcos asked [Fe] Gimenez [personal secretary] about the status of her talks with their Swiss contacts. Gimenez replied that the Swiss contact would take care of protecting and moving the accounts and re-documenting them.

Mrs. Marcos then confirmed to me that several records of their deposits were left in the Philippines. It was at this moment that I realized…the movement of accounts was indeed happening.

I told them that it was not the time to fully trust the Swiss banks and described to them the conditions if the deposits were frozen, as what happened to the Shah of Iran. I offered an alternative and recommended that they give me an authority to see their bankers and I would have the deposits transferred to my bank in Vienna.

About an hour later, Ferdinand Jr (Bongbong) arrived and I was asked to brief him. Mr. Marcos told Bongbong to check with their contact in Switzerland. At that point, I was asked to leave the room…

Later, Bongbong came out of the house and asked me to join him in his car, a gray Toyota Corolla, while Col. Ver was asked to remain and wait four return. Bongbong drove to the Honolulu International  Airport to look for a public pay phone. After he parked the car, I followed Bongbong to one of the pay phones. While I maintained a distance from where he was, I could hear that he placed a long-distance call. He asked the operator to charge the call to a Honolulu phone number. I also noted that he was talking to a person whom I assumed to be their Swiss contact. I heard Bongbong mention the country of Panama and I heard him say that they could not leave the US nor could anyone of them go to Panama. Bongbong then hung up and we went back to Hickam.

Bongbong entered the house while I waited outside…After about an hour, Bongbong came out again and asked me to join him in his drive to the airport. As he placed the second call, the telephone operator refused to honor the Honolulu telephone number to which he was charging the call. Bongbong became concerned as it appeared very unusual for the operator to refuse to place his call. He feared being monitored by the US authorities.

We then returned to the house. Bongbong asked Col. Ver to help him carry a bag outside. Mrs. Marcos gave me a small note with the name ‘Palmy Foundation’ and she said to me that I should not let Mr. Marcos, Bongbong, or any member of her family know of the account. She handed over a small plastic bag which she said contained travelers’ checks and told me to hold the checks until further notice. Mr. Marcos was no longer in the living room. Mrs. Marcos said that Bongbong would coordinate with me.

We left Hickam past midnight and Bongbong decided to bring me back to the hotel so he would know where I stayed in case he would need to see me. While in the car, I told Bongbong that I would have to leave within the next 24 hours. I told him that they should decide fast.

…About lunchtime, I received a call from Col. Ver advising me that Bongbong would be seeing me in the evening. .. Bongbong gave me two letters of authority [one signed by Ferdinand Marcos, the other by Imelda Marcos]. The understanding was that the funds were going to be transferred to Export-Finanzierungsbank, my bank in Vienna. No account was specified.

I also received small notes from Bongbong confirming several instructions that upon the receipt of funds in Vienna, he would be sending somebody to coordinate with me and take the funds from us. He also wrote that it was up to me to bill them for my fee. (Ikaw na ang bahalang sumingil sa gagawin mo.)

Bongbong used the telephone in our hotel to call the Swiss contact and, as we agreed, our names were not given. He only gave my Austrian driver’s license because Dagher and I did not want the Swiss contact to be alerted as to who I was…

Bongbong advised his Swiss contact to expect the arrival of an individual bearing the license number he had given. Then he gave us the phone number of the Swiss contact who turned out to be Ernst Scheller. I learned later that he was a senior VP of Credit Suisse. He was the account manager of the Marcos deposits.” – Rappler.com