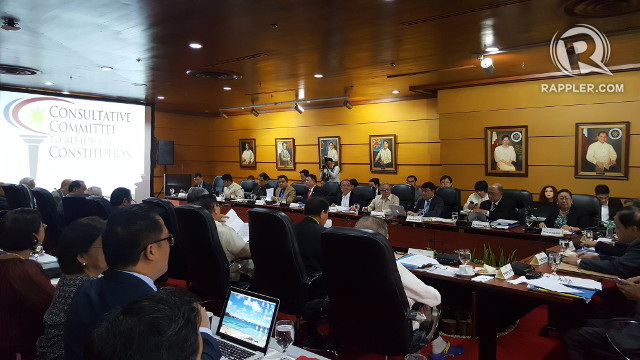 MANILA, Philippines – The Consultative Committee (Con-Com) formed by President Rodrigo Duterte approved on Tuesday, July 3, a draft constitution they will submit to the Chief Executive.

This submission is a crucial step, as Duterte is expected to endorse the Con-Com's output to Congress, the body that will ratify a new constitution.

Congress is not bound to adopt the Con-Com's draft but if it bears Duterte's approval, the document should have some impact on Congress, composed mostly of the President's allies.

The document will be submitted to Duterte on or before July 9, giving him two weeks to review it before his State of the Nation Address on July 23.

So what's in the draft now up for Duterte's approval? Rappler compiled a quick list of highlights below.

True to Duterte's advocacy, this draft constitution creates a federal system of government – meaning regions will be given more power to self-govern and only powers of nationwide bearing will be left to a central government. (READ: Consultative Committee delineates powers of federal gov't, regions)

The proposed federal constitution, however, retains the current presidential form of government such that Filipinos still get to directly vote for the president. There will be no prime minister elected by legislators. (READ: Will federalism address PH woes? Pros and cons of making the shift)

No term extension for Duterte, Robredo

One of the biggest fears surrounding charter change, a term that just means revising the constitution, is that it is being used by Duterte to stay longer in power. But in the Con-Com's draft, the terms of Duterte and Vice President Leni Robredo will end on June 30, 2022, and the transition to the new federal constitution also takes effect on this day. This means that Duterte will be bound to the 1987 Constitution until the end of his term, a constitution that allows no reelection or term extension for the president.

LOOK: The draft constitution to be voted on today. If this is approved, it will be given to #PresidentDuterte who may/may not endorse it to Congress for their consideration. @rapplerdotcom pic.twitter.com/vtFwLAfxLm — Pia Ranada (@piaranada) July 3, 2018

The heart of a federal constitution is it gives regions more power to govern themselves instead of leaving such powers to the often distant central government in Metro Manila.

The current 17 regions, plus a new Negrosanon region, will become federated regions that have the power over socioeconomic planning, land use, and financial administration and management, among others. The central government, called the federal government in the draft, will retain powers over national security and defense, international relations and diplomacy, customs and tariffs, federal crimes, and the justice system, among others. (READ: How Duterte's charter change committee proposes to fund regions)

The draft's Bill of Rights explicitly mentions environmental rights of citizens and socioeconomic rights to education, health, and decent housing. This means citizens will have a constitutional basis to demand critical services from the government. In the current charter, these rights are not in the Bill of Rights but in the article on state policies.

In place of the Supreme Court, there are 3 high courts in the draft – Federal Supreme Court, Federal Constitutional Court, and Federal Administrative Court – with distinct areas of jurisdiction and functions.