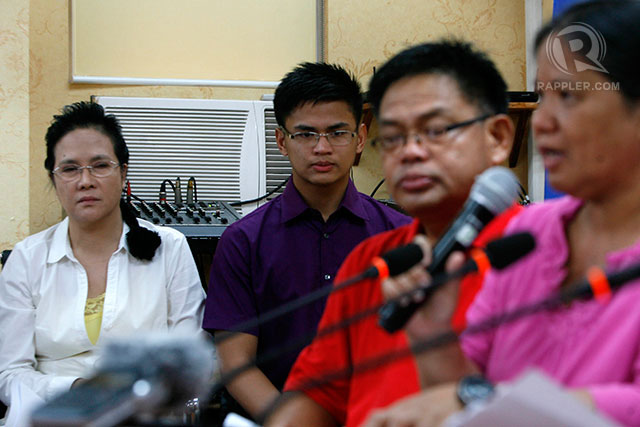 MANILA, Philippines – The fight is not over. Wearing civilian clothes, dismissed cadet Aldrin Jeff Cudia faced the media on Monday, March 24. He didn't speak but he sat through the press conference his family called a week after his failed campaign to graduate on March 16 with his classmates in the Philippine Military Academy (PMA).

President Benigno Aquino III ordered a review of his case. The family said the President promised them results in a week, but nothing happened.

"Pinagbigyan po namin siya sa kaniyang kahilingan. Kami po ay nanahimik sa loob ng isang linggo. Humingi po siya ng isang linggo upang gawan ng solusyon ang problemang ito. pero wala pong nangyari," he added. (We agreed to his request. We stayed quiet for one week. He asked us to give him one week to look for a solution to the problem, but nothing happened.)

Armed Forces spokesperson Lieutenant Colonel Ramon Zagala said the special investigation board has not submitted its recommendation to Armed Forces chief of staff General Emmanuel Bautista, who was tasked by the President to lead the probe. "We will wait for that," Zagala said.

Not joining the military

Jeff has no plans to join the military anymore, according to his father.

"Paglalaruan lang siya doon," he said (They will just make a fool of him.)

He was supposed to graduate as top of the Navy Class which would have entitled him to receive the navy saber. But the PMA Honor Committee, composed of cadets, declared him guilty of violating the Honor Code because he supposedly lied about the reason he was late in one class in November. The code implores the cadets not to lie, cheat, steal, nor tolerate those who do so.

The family wants the PMA to give Jeff his diploma so he can look for a job outside the military.

"We will not make him join the service even if he wants to. We are just requesting for his diploma. That is also the suggestion of Congressman Biazon, who understands us as parents," Renato said in Filipino. Biazon is a former Armed Forces chief of staff.

Jeff's mother Filipina and sister Anavee broke into tears several times during the press conference, as they slammed the supposed injustice committed by the Honor Committee.

Jeff is not a liar, his mother said.

The Cudia men tried to keep a straight face. But the patriarch was on the verge of tears as he watched his wife and daughter break down. Jeff's red eyes also betrayed his composure.

Both former soldiers, Renato and Filipina said they respect the military, the PMA and its code.

The supposedly confidential proceedings of the Honor Committee was exposed to the public because of Cudia's case. The family is contesting the original 8-1 vote that was changed to become a 9-0 unanimous vote against Jeff.

Anavee claimed a certain cadet Lagura himself admitted to Jeff that he was pressured to change his vote. Lagura denied this to the Cadet Review and Appeals Board. The PMA also said a second voting is allowed in the amended proceedings of the Honor Committee.

Anavee claimed a listening device was found inside Jeff's holding center in the PMA. The Commission on Human Rights is now looking into the allegation. 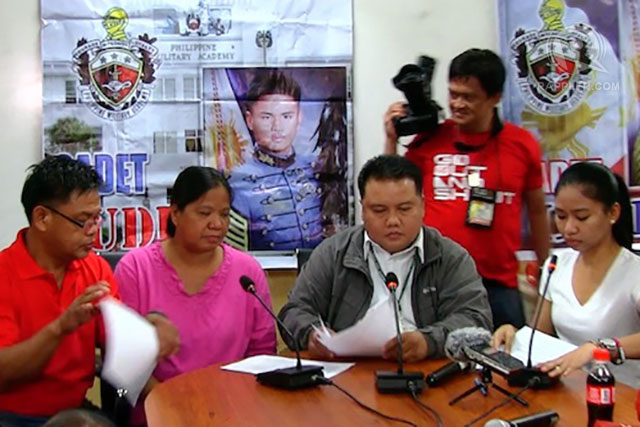 FAMILY BATTLE: Cudia family holds a presser a week after they talked to President Aquino.

The family is scheduled to file a new petition before the Supreme Court on Tuesday, March 25, to strengthen a case earlier filed there. They had asked the SC to order the PMA to allow him to graduate but this was denied. The case is alive, however, because the SC sought the comment of the academy on their petition.

The family continues to hurt from attacks against Jeff and Anavee, whose Facebook post started the family battle. Her post went viral and gained for the family strong public support but provoked negative reactions from PMA alumni.

The family lamented calls for them to "move on." They can't do that until Jeff's case is resolved, they said.

Jeff's case has led to calls for reforms in the academy. (READ: 50 cadets once left PMA for honor violations). The AFP ordered the PMA to review its systems and processes.