MANILA, Philippines – Two rabid supporters of President Rodrigo Duterte sneaked into the Rappler headquarters on Thursday afternoon, February 21, to condemn the media organization for allegedly destroying the country’s image before the world.

Blogger Mark Lopez, accompanied by active netizen Jovybev Aquino, did a Facebook Live as they trespassed on Rappler premises in Pasig City at around 3 pm, telling their viewers they were calling on Rappler to pay taxes instead of staging a “drama” before the international community.

Since local and international groups began denouncing the arrest and overnight detention of Rappler CEO and executive editor Maria Ressa over cyber libel last February 13, the online networks of President Rodrigo Duterte’s supporters also started their campaign against Rappler by branding it as a "tax-evading" company. (WATCH: Rappler's cyber libel case in a nutshell)

The tax issue stems from 5 tax cases that the government has filed against Rappler and Ressa. The charges wrongfully classify as income the investment raised by the company from the Philippine Depositary Receipts it issued in 2015. (READ: Timeline: Tracing BIR's tax complaint vs Rappler Holdings) 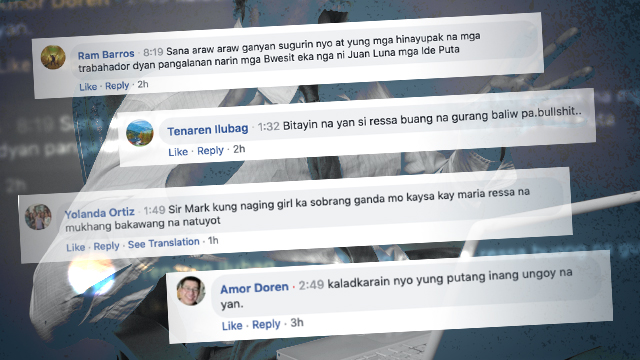 Standing in front of Rappler’s doors on Thursday, the protesters each carried a computer-printed sign, which said: “As a Filipino, I am going to hold Maria Ressa and Rappler accountable for destroying the image of my country” and “I am not a Filiipino troll acting on anyone’s marching orders. I am 100% Filipino who can love this country more than an American will ever do.”

The bloggers continued broadcasting even as building security staff escorted them out 13 minutes after they slipped past security checks.

It appeared that OFW communities were the target audience. Within 3 minutes after the video went live, Facebook account @hellophiltai, which belongs to a Youtuber who appears to be based in Taipei, reposted the video to a number of OFW groups, including those supporting Dela Rosa, senatorial bet Bong Go, and President Duterte, as well as a group attacking Vice President Leni Robredo.

Shortly after the incident, the Presidential Communications Operations Office broadcast a talk show on Facebook with Lopez as guest, talking about their illegal entry into the private building where Rappler holds office.

In a statement Friday morning, February 22, Rappler said: “We have been used to online attacks and lies against us by loyalists of the President. But this takes it to a new level. We have taken all precautionary measures to ensure the safety of our staff. We will be the last to question any peaceful form of protest even if, and especially if, against us. But we take seriously the incitement to violence found in the post.” 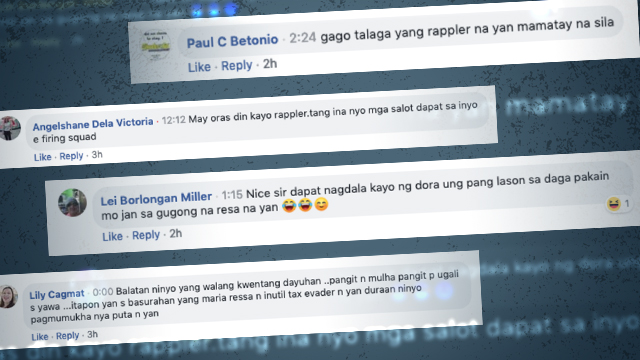 A number of viewers who commented on Lopez’s Facebook broadcast called for violence towards Ressa, Rappler, and its offices. Here are samples of the comments:

Cha Almonte:
Dapat sugurin ng taumbayan tapos kaladkarin nyo palabas yang putang inang yan cnisira nya ang pilipinas!
(The people should attack, then drag that whore out of their office since they are destroying the Philippines!)