In Ilocos, Robredo asked: Why are you proud to be anti-Marcos?

ILOCOS NORTE, Philippines – In her first visit to the Ilocos region as a vice presidential candidate, Camarines Sur Representative Leni Robredo did not have the usual throngs of politicians waiting for her, eager for a precious photo opportunity. Nor was she greeted by groups of supporters clad in yellow.

It was a decidedly low-key visit on Friday, March 18, for the ruling Liberal Party (LP)’s vice presidential candidate, as she ventured into the bailiwick of one of her chief rivals, Senator Ferdinand Marcos Jr.

Marcos, son of the late dictator Ferdinand Marcos Sr, was governor and later, congressional representative of the province. His older sister, Imee, is the incumbent governor while his mother, former first lady Imelda Marcos, represents the province’s second legislative district.

So it didn’t really come as a surprise when during a forum with students at the Northwestern University in Laoag City, Robredo was asked about her perceived “anti-Marcos” stance. (READ: Robredo, Marcos face off on martial law at VP forum)

“Bakit po kayo (Why are you) proud as the only candidate na (who is) anti-Marcos sa (on) social media at sa mga statements niyo (and in your statements)?” one student asked Robredo.

The neophyte legislator said hers was not an “anti-Marcos” stand but one against martial law. She explained it in a way that could be easily understood by her young audience.

(For me, it’s time to move on but even in the relationships you have, you’re unable to move on when there are a lot of unsettled past issues. And that’s why I feel very strongly against martial law.)

Of the 6 candidates for the vice presidency, it’s Robredo who has taken a solid and consistent stand against martial law, the only one thus far who has insisted it’s only right the Marcos family apologize for the atrocities of martial law. (READ: Robredo to Bongbong: 'Facts don't lie')

Senator Marcos’ father ruled the country for over two decades after he placed it under Martial Law, supposedly because of insurgent threats. The era is marred for numerous instances of human rights violations, enforced disappearances, suspension of free speech, and poor economic policies. (READ: Marcos years marked 'golden age of PH economy? Look at data)

Marcos Sr was overthrown in 1986, during the EDSA Revolution. Robredo, explaining her anti-martial law stand, said her “political awakening” came after the death of senator Benigno Aquino Jr, father of the current president.

(That was the time when I realized belatedly the human rights abuses that was happening – the number of youth who disappeared, who were tortured, who were killed simply because they had different beliefs. Many media establishments were closed just because they voices opposition against the government.)

Robredo said an “acceptance of the mistakes in the past” is needed, partly so that it won’t happen again.

Laoag was the first stop in Robredo’s visit to the provinces of Ilocos Norte and Ilocos Sur.

In Laoag, Robredo visited cloistered Carmelite nuns, who gifted her with a pack of scapulars and a prayer. “We pray for her victory in the coming elections, “ one nun whispered as the rest placed their hands over the Camarines Sur legislator. 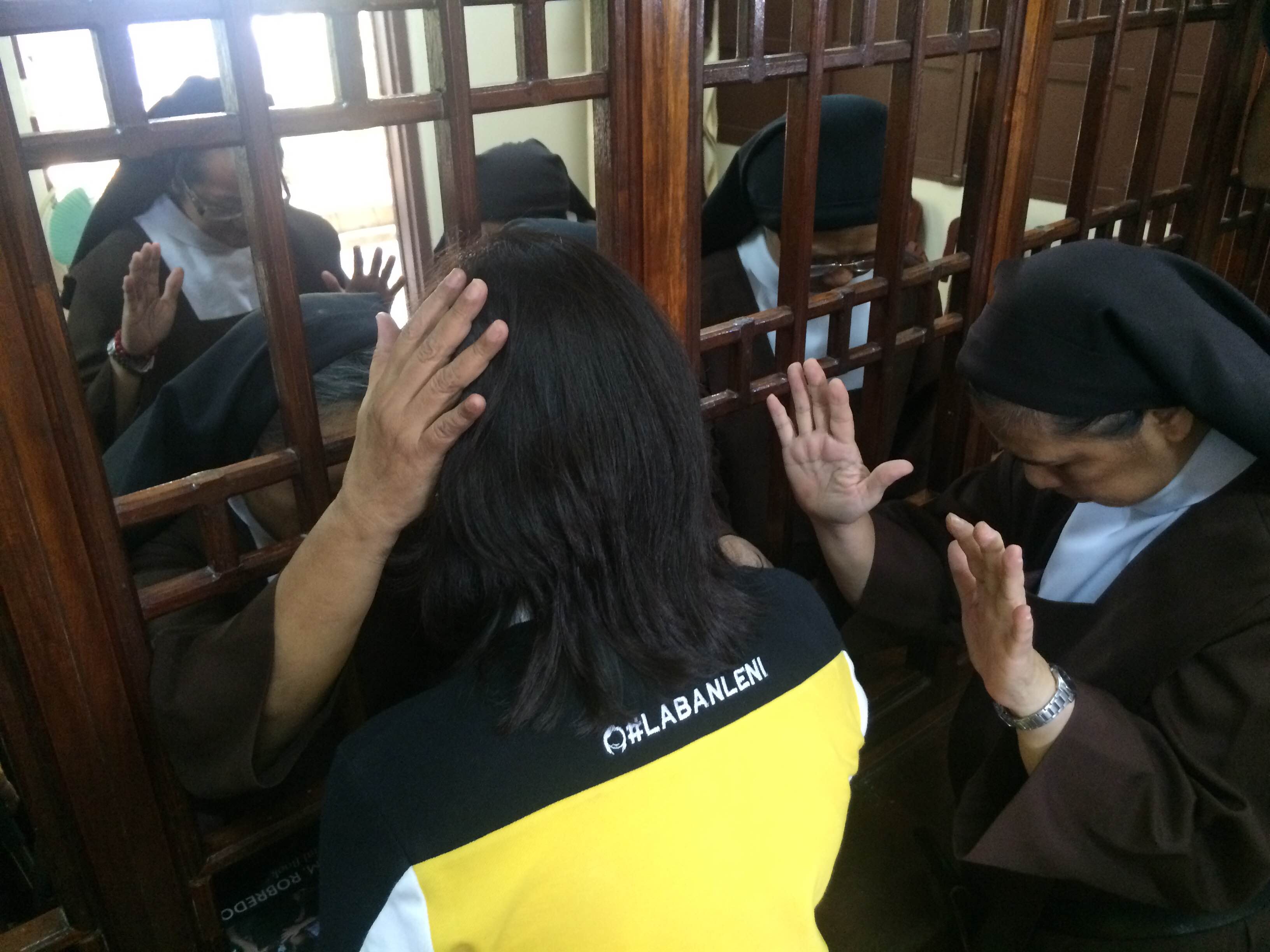 (As long as a present myself, who I am, then it’s up to voters to decide. It would be worse if I didn’t even try to introduce myself.)

But how will wooing the Marcos-dominated north work when she’s firm on her anti-martial law stand?

(I cannot flex my answers just to court votes. It’s better they know where I stand because if I change that, where are my convictions?)

Marcos and Senator Francis Escudero are currently leading other vice presidential bets in surveys on voter preference. Robredo, the biggest gainer in the ABS-CBN-commissioned poll conducted by Pulse Asia Research, Incorporated, is not far behind. – Rappler.com