The Scrum: Will voters go for ill candidates like Miriam Santiago? 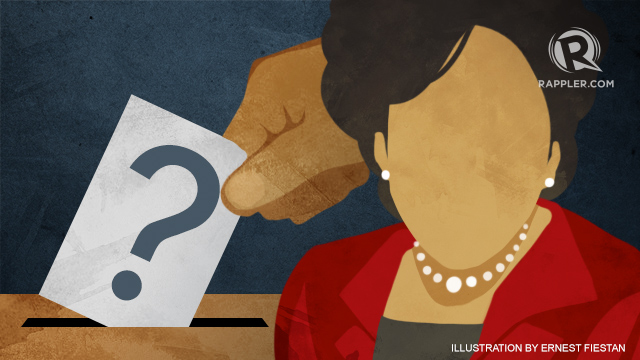 Philippine netizens threw a mini party on Wednesday, July 22, when their darling of a senator announced she’s eyeing the presidency in 2016. It’s time we ask everybody to calm down.

If we bothered to read beyond the headline and the blurb, we’d know that Miriam Defensor Santiago premised her political plan on her doctors’ statement that her stage 4 lung cancer had been “controlled.”

I won’t start a debate about whether cancer can actually be licked (although I’d like to hear the opinion of Miriam’s fellow Ilonggo, Senate President Frank Drilon, since his first wife suffered from the same illness). But I want a discussion on whether the state of a (possible) candidate’s health has an effect on the voters’ decision to support him or her at the polls.

This is one question that presidential preference surveys have not asked – at least not since I started covering elections about two decades ago – but I suspect it matters to voters.

In 2004, Raul Roco’s chances in the presidential contest considerably weakened when he went into remission in the middle of the campaign period. He had a bout with prostate cancer two years before the 1998 presidential elections, and this had been whispered about, but just that – whispered about. He finished 3rd in a 10-cornered fight. (Roco, by the way, performed better than Miriam, who ended 7th, in the polls.)

But when he launched a second bid for the highest post and publicly acknowledged his illness, the dynamics changed. He had to take a break from his campaign to seek treatment in the United States, and came back to finish second to the last in a 5-way contest.

Roco died in August 2005. If he had won, that would have been one year into his presidency. If the voters had any apprehension in 2004, the beloved former senator’s death showed them it was a valid concern.

Again, nobody ever did a survey on whether it was a reason for the decline in voters’ support. He was up against the incumbent Gloria Arroyo and the very popular Fernando Poe Jr. But if health concern was the culprit, then it will be instructive in watching Miriam’s case now.

Note that when Miriam announced she was looking at running for president, she also cited a nationwide Publicus Asia survey that says she was the 2nd most popular choice for president despite her absence from the political scene.

First, she wasn’t really absent despite her sickness. Since she announced her cancer in July 2014, she had launched two books of Miriam Santiago pickup lines and jokes that instantly became bestsellers. She dutifully issued press releases, commenting on issues of the day and putting the intellectually challenged public officials in their proper places – sure-fire materials to send page views spiralling. She remained in the public’s awareness.

Second, the Publicus Asia survey was done in late February to early March this year, and the question on voters’ preferences for president was sort of a token question in more than a hundred that probed into voters’ psychographics. These were actually the reasons that Publicus didn’t want to release that single slide in the survey results presentation – so it doesn’t contribute to the not-so-helpful horserace mentality, and because the data were 4 months old.

But for purposes of discussion, I’d quote from that survey: in early March, 16% of the 1,500 respondents said they preferred Miriam for president, second to Senator Grace Poe.

It was an improvement, if we’d consider the presidential preference surveys by other polling firms, which put her numbers at around 10% after she announced in July 2014 that she had stage 4 lunch cancer.

In October 2014, she announced that 90% of her cancer cells were gone, but that she was “not yet physically fit” to go to the Senate due to the “debilitating fatigue” caused by her illness.

In surveys done by other firms after March, the voters who preferred Miriam for the 2016 presidential elections “dropped” to 6%-9%.

There’s no indication whether the fluctuating figures have anything to do with voters’ concern about her health condition. As long as the question is not asked in a poll – not just about Miriam but about other political figures as well – we will never know up to what point voters would throw in their lots with candidates.

Meanwhile, we only have anecdotes of campaign strategists setting off a “bulong (whisper) brigade” – that this or that candidate might not last a term, so we may want to minimize the risk and vote for the rival instead.

Either that or, as Miriam once said, we still vote for the likes of her instead of the “idiots.” We can always elect an equally good vice president. – Rappler.com

Postscript: In the Publicus Asia survey, Miriam topped the list when respondents – 17-45-year-olds – were asked who they thought was the best among the incumbent senators. She had 32%, followed by Grace Poe with 27%, and Francis Escudero with 13%.

Given a list of reasons for considering these incumbents as the best senators, the greatest number of respondents cited Miriam’s being “brave/fearless” (31%) and “intelligent/bright/smart” (21%).

The Scrum” is Rappler's take on issues and personalities of the 2016 elections. Derived from a media term that refers to reporters surrounding politicians to press them to answer questions and respond candidly, “The Scrum” hopes to spark smart conversations on politics and elections.