Veloso to Erap: Governing not about good looks 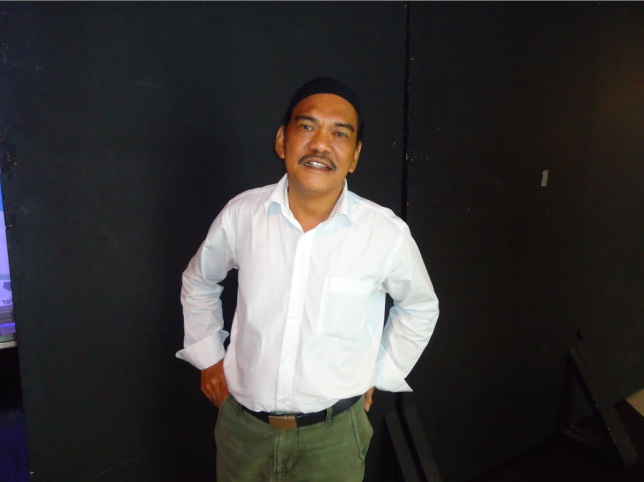 'I KNOW THE JOB.' Lou Veloso, candidate for vice mayor of Manila, has done local legislative work as councilor for 15 years.

But he quickly made a jest: “Kaya nga nagpakabait na ako. Kung 'di ka na nga guwapo, tarantado ka pa, sino pa’ng magtitiwala sa 'yo? (That's why I'm trying to be good. If you're already ugly and you have a bad personality, who else would trust you?)” Veloso said, alluding to a monologue he popularized as Mr. Truman in a TV show many years ago.

Veloso also made a cameo role as former Manila Mayor Antonio Villegas in Lim's biopic, which is seen by critics as a propaganda vehicle for the tandem in time for the local campaign, which starts March 29. Last year, Veloso appeared as a fisherman in Bourne Legacy, which stars Hollywood actor Jeremy Renner.

He said being a thespian has given him a clear understanding of the struggles of ordinary people.

“’Sinasalaysay ko ang buhay. Nalaman ko na dapat hindi ka maghahangad ng mas marami para sa 'yo (I tell stories about life. I learned that you should not want more than what others get),” he said.

Veloso got the highest number of votes among candidates for councilor in the 2010 elections. This gave him the privilege to preside council meetings whenever the vice mayor was away.

If elected, the laboratory technician graduate of University of the Philippines-Manila aims to prioritize ordinances and projects focusing on vocational courses, employment, and health.

Veloso revealed that he was second choice as running mate of Lim. Actor and director Cesar Montano was supposed to run as the Liberal Party’s bet for vice mayor, but he was busy with the movie. “The next day, in-announce na, 'Lou, ikaw na’ (They announced, ‘Lou, we’re fielding you’), ” he recalled.

What made him say yes?

“Mahirap sa gobyerno na nagtutunggali ang vice mayor at mayor. (It will be difficult for a local government unit to have a mayor and vice mayor on opposing sides.) Mayor Lim needs a person he can trust,” Veloso said.

He added that he admires Lim's work ethics. “Nakita ko ang trabaho niya, istrikto at disiplinado, pero maayos ang pamamalakad. Alam ko nailahad na ni Mayor ang kanyang nagawa at gagawin pa. 'Yung sa kabila, hindi ko alam. (I've seen how he works—he's strict and disciplined and has governed the city well. The mayor has shown what he has done and will do for the city. I have no idea what the the other camp intends to do).” – Rappler.com