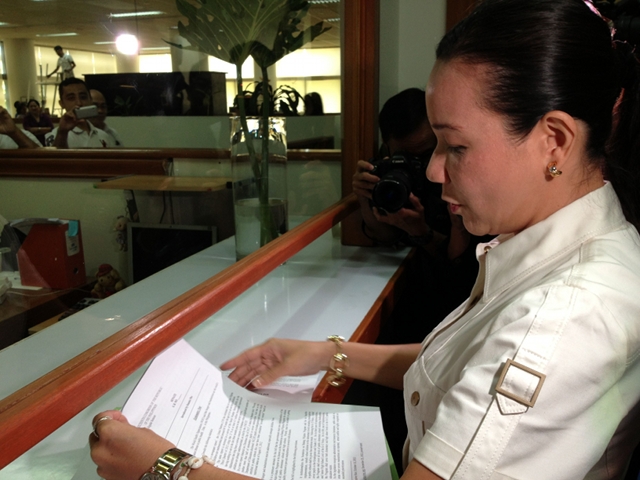 FIRST BILLS. Sen Grace Poe files bills on film tourism and a lunch program for public schools on her first day of reporting to Senate work.

MANILA, Philippines – For newly-installed Sen Grace Poe, even filmmaking is more fun in the Philippines.

The surprise frontrunner in the May polls was among the first senators to file their bills in the Senate on Monday, July 1. One of Poe’s two bills is a measure pushing for film tourism, which she said will generate jobs and promote the Philippines at the same time.

The former censors chief and daughter of the late action star Fernando Poe Jr said the bill was close to her heart and to her staff of film buffs.

“The premise is that, for example, in the Lord of the Rings, they shot it in New Zealand so the tourism there boomed. Even an obscure place in North Carolina saw a rise in tourism when a movie of I think Kevin Costner was shot there. Also The Beach, when they filmed in Thailand, which already has good tourism, it now became concentrated on youth-oriented backpackers,” she said.

“So you can see there’s a direct impact on the tourism and the economy if a country is featured nicely in a film,” Poe said in a press conference in the Senate.

Poe explained that part of her advocacy is the allocation of a bigger budget to the Department of Tourism, a portion of which will be focused on film tourism.

She said the added funds will also allow the agency to help TV networks in promoting their shows in international exhibitions. She referred to soap operas that are dubbed in various languages and shown in other countries.

Poe also said the government should spend on a catalogue or portfolio of various sites in the Philippines featuring the shots per location, contact information of the local government, demographics, language and the “look” of the residents there.

“Parang nagbayad ka lang ng ad para i-promote ang bansa mo, but this time it’s magnified a million times because it’s shown in the big screen all over the world. ‘Yun ang aking pangarap. Sana maraming film lovers i-promote rin ito.” (It’s like you paid for an ad to promote your country, but this time it’s magnified. That is my dream. I hope many film lovers will promote this.)

Poe stressed the importance of the department's involvement in the effort.

“Because when you say film initiative, it’s always FDCP (Film Development Council of the Philippines), MTRCB (Movie and Television Review and Classification Board), there is no major department that’s attached [to it].”

She added: “That’s the way we can influence the world. That’s how Hollywood influences people all over the world to think that America’s great. I think the Philippines can do the same and I don’t think we should trivialize the importance of Philippine cinema and culture in promoting our country.”

Poe also filed the “Sustansiya ng Batang Pilipino” (Sustenance for the Filipino child) bill, which aims to set a standard lunch program for all public elementary schools and later on for the whole K-to-12 program.

The neophyte senator also filed a resolution calling for an inquiry into the alleged sex-for-flight scheme involving overseas Filipino workers, and another resolution to help copra farmers.

Poe said she will leave it up to likely Senate President Franklin Drilon to assign her a committee chairmanship, but she has expressed interest in the committee on public information and mass media.

If she will lead the committee, Poe said she will push for the passage of the Freedom of Information (FOI) bill but has reservations about some provisions.

“For example, I do not fully agree with the right of reply and let us not leave government offices in a bind. There should be funding for archiving because information will be useless if it is not properly archived so that should be part of the provisions of FOI,” Poe said.

The right-of-reply provision requires media companies to give space to government officials and other subjects affected by documents accessed through the law. Advocates have described it as a “killer provision” that undermines the goals of the bill.

“If given a chance to serve in that committee, I will not have a narrow view on this issue and I will listen to all aspects. What is important is we still protect national security,” said Poe.

Poe also welcomed the indirect initiative of FOI advocates in the House of Representatives, who filed their own version of the bill Monday.

“It’s important that they take an active role in lobbying for the interests of the public and one of these interests is FOI because how will we know what government is really doing if we don’t have complete access to documentation so we welcome it,” she said.

Poe said she initially did not intend to go to the Senate on Monday, with the 16th Congress opening on July 22 yet. Her mother, Susan Roces, told her otherwise.

“She said report to work so that people who voted for you know that you’re actually showing up already. At least show to them that we take that mandate seriously and we are grateful for their trust.” 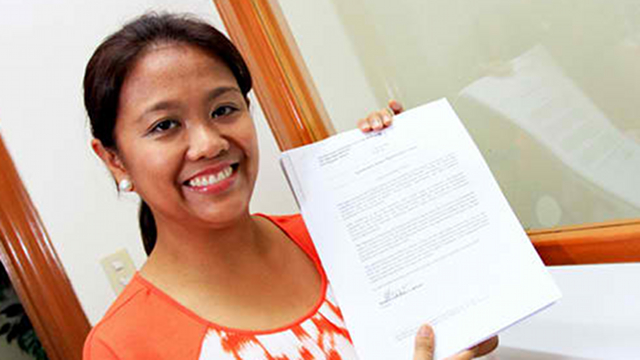 LINED UP. Sen Nancy Binay prepares to file her first 15 bills focusing on women and children.

Another newbie senator, Nancy Binay, also reported to work, attending the flag-raising ceremony at the Senate.

In a press statement, Binay named the 15 bills she intends to file. Her office has yet to release copies of the bills.

Among her priority measures are:

“I want to make sure that the bills we will be crafting are realistic, doable …. I am aware that it would take a lot of skill to manage and defend to get the bills passed, but I’m ready to discuss and negotiate with my colleagues in the Senate,” Binay said. – Rappler.com