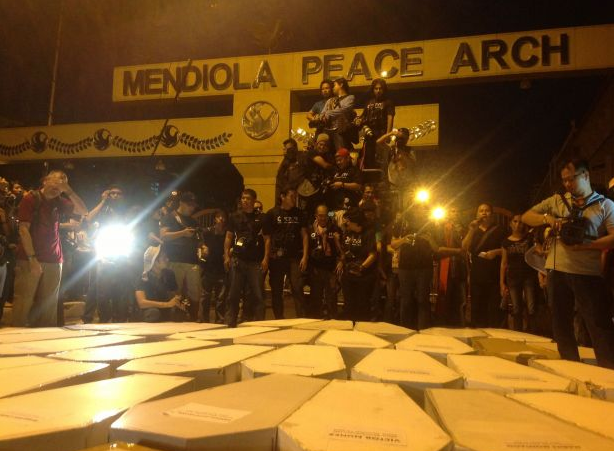 RAMPANT KILLINGS. Mock coffins were laid on the streets during the rally to represent the rampant killing of journalists in the country. Photo from CMFR's official Twitter account.

MANILA, Philippines - On the third anniversary of the Maguindanao massacre, known as the single deadliest event for journalists, the Center for Media Freedom Responsibility (CMFR) criticized the failure of President Benigno Aquino III's administration to bring to justice those responsible for the death of the victims.

As part of its commemoration of the 58 killed in the massacre -- 32 of whom were journalists -- CMFR held the second International Day to End Impunity not just to remember the victims but also to demand for justice, on Friday, November 23.

No convictions have been made in relation to the massacre.

At the Welcome Rotonda in España, mock coffins lay on the street not just to highlight the sheer number of the victims of Maguindanao, but also to represent the rampant cases of killings of journalists in the country.

Hundreds also participated in a funeral march that called for an end to impunity, with attendees wearing black, carrying mock coffins with the names of victims and tarpaulins calling for justice.

In a statement, CMFR questioned the slow pace of the Maguindanao trial, and denounced the lack of progress regarding Aquino's promises in 2010 to help speed up the quest for justice.

It said that of the 153 total journalists killed since 1986, 14 were murdered under Aquino's administration, and not one mastermind in any of the killings has been brought to trial.

It also alleged Aquino of letting the Ampatuan clan, who are accused of the massacre, run free.

"The Aquino administration’s embrace of a clan long known for warlordism only highlights how state policy can fuel impunity," the statement said.

"Aside from the killings, Mr. Aquino has consistently exhibited a penchant for proposals to curtail press freedom and freedom of expression."

Upon arrival in Mendiola, participants lit candles to remember the dead and gathered for a prayer rally calling for swift justice.

Since the massacre in 2009, only two of the eight Ampatuans in jail have been arraigned, 3 witnesses were killed, at least 30 were barred from testifying, and relatives of victims have fled their hometown after receiving death threats. Out of the 196 accused in the massacre 93 are still at large while only 66 of the 103 suspects detained were arraigned. 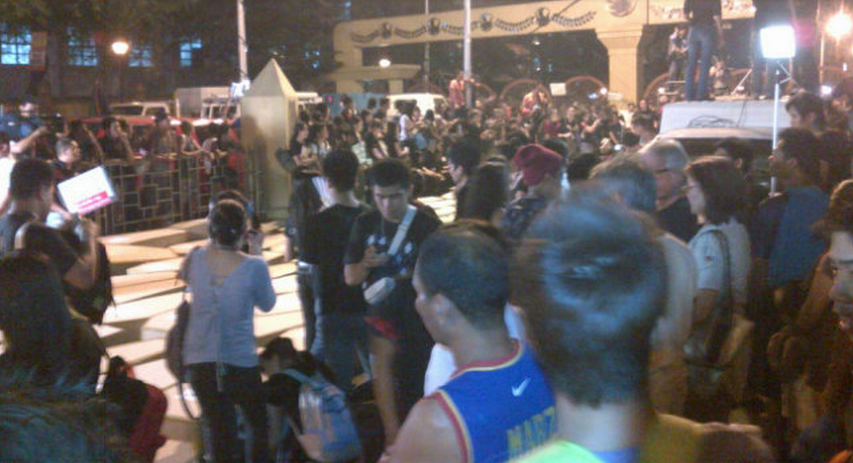 IN COMMEMORATION. Hundreds gathered in Manila to commemorate the victims of Maguindanao and other media killings. Photo from the official CMFR Twitter account.

The CMFR statement also cited a Southeast Asian Press Alliance report that declared the Philippines as the most dangerous place for journalists in the region.

Most suspects of the killings are said to be state actors, including policemen, soldiers and elected officials.

"Taken together, the acts of commission and omission by the Aquino administration betray sheer lip service to justice and press freedom, and a dangerous tendency to sacrifice both to the exigencies of power," it read.

The CMFR commemoration was the largest in the country, but other organizations across the nation also called for justice and remembered victims.

Media organizations paid tribute to the dead in various ways, while the government of the Autonomous Region of Muslim Mindanao held its own ceremony for the first time since the massacre.

While rallies took place throughout the Philippines, the families of those killed also cried out for impunity.

Myrna Reblando, wife of slain journalist Alejandro “Bong” Reblando, said the people and the government must not forget the incident.

Reblando, in a video message, said 3 years has passed since the incident but their 7 children are still in grieving and pain.

Reblando is presently seeking asylum in Hong Kong after she felt that she is not safe in the country anymore.

“I am here in Hong Kong because this is the place where I feel I am safe and I can freely speak out my opinion about the on-going hearing of the Maguindanao massacre,” Reblando said. 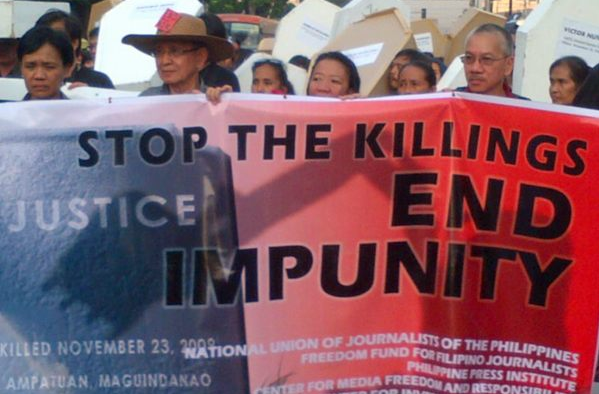 Reblando agreed with CMFR in its assessment of Aquino, saying that the President has failed to make significant progress in the case.

“I am dismayed, annoyed and saddened because I think the Aquino administration is not serious in giving true assistance to the families of the victims of the massacre,” Reblando added.

“The system of governance in the country is rotten. But I’m not saying that there is no way to change this. There is a way to reform our governance if all leaders and people will unite."

Reblando also appealed to other families of victims not to lose hope, and to continue their struggle for justice together. - Rappler.com with reports from Karlos Manlupig