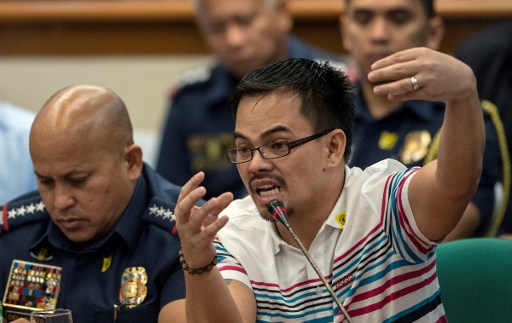 TESTIMONY. Kerwin Espinosa narrates who he got into the drug trade before the the Senate committees on public order and dangerous drugs, and on justice and human rights on November 23, 2016.

The “blue book” referred to a notebook supposedly containing a list of recipients of Espinosa's “protection money." Espinosa's denial  contradicted the claim supposedly made by his father in his affidavit.

Chief Superintendent Jovy Espenido, Albuera police chief, had earlier revealed the alleged existence of the "blue book" which included the supposed names of people who received bribes from the alleged drug lord.

Espinosa also pointed out that the signatures affixed on the two affidavits – an initial and supplemental one – did not belong to his father.  (READ: Politicians, police, media: Who were named in Espinosa's affidavit)

“Hindi ito ang pirma ng papa ko (This is not the signature of my father,” said Espinosa in an affidavit he issued before the Philippine National Police (PNP), which he read at the Senate inquiry.

The Espinosas were among the first to be named by President Rodrigo Duterte in the government's drug list. The younger Espinosa had been peddling drugs in Eastern Visayas since 2011, a few years after being released from jail.

His father, who was elected only in May 2016, was accused of “coddling” his son and acting as a protector. The Senate is investigating the death of the older Espinosa, during what Leyte police say was a legitimate operation to serve a search warrant against him. Senators, however, had expressed disbelief over these claims and have painted it as a “premeditated” act on the part of police.

It’s not the first time that the late mayor's affidavit has been cast in doubt. His brother had earlier claimed that the affidavit was ready-made and prepared by police beforehand.

But Espinosa, speaking before the Senate, said in Filipino that his father was “not in a position to know who I connived with and transacted with when it comes to illegal drugs.” He insisted only his affidavit was valid.

Leilani Villarino, the Espinosa’s family lawyer, said no legal counsel was present when the late mayor executed his affidavit before police. The Public Attorney’s Office (PAO) denied sending anything to assist the mayor, contradicting claims by Eastern Visayas police.

In his affidavit, Espinosa claimed that Espenido, the same cop who chased down his father and conducted several operations against his family, had an ax to grind against them. He claimed it was Espenido who linked him to Ronnie Dayan, former bodyguard and paramour of Senator Leila de Lima.

He also implicated several police officers as alleged recipients of protection money, among them, at least two cops who were involved in the operation that led to his father's death. (READ: Kerwin Espinosa: Cop who led operations vs dad asked for P3M)  – Rappler.com