MANILA, Philippines – The Game of Thrones-like saga at the House of Representatives continues as 3 alliances of lawmakers are laying claim over the minority bloc.

On Wednesday, July 25, 12 legislators from the Liberal Party (LP) called for a press conference to declare they are "the duly constituted minority under the rules" of the House. These lawmakers are:

(They're not doing the Speaker a favor. They're bringing back the reason why Speaker Alvarez was removed from his post.... So if they love Speaker Arroyo, they need to let the rules prevail.)

Quimbo was referring to the process in 2016 that led to Suarez's election as minority leader. In past Congresses, the lawmaker who got the second highest votes in the speakership race automatically becomes the minority leader. At the time, Alvarez got 251 votes, Ifugao Representative Teddy Baguilat Jr got 8 votes, while Suarez only got 7 votes as he voted for Alvarez.

Allies of Baguilat argued he should have been declared as the minority leader. But the Alvarez-led majority bloc changed the rules and the minority bloc became mandated to choose their leader in separate elections. All those who did not vote for Alvarez automatically became part of the minority.

Aside from the LP and the Suarez bloc, the Alvarez bloc is also claiming to be in the minority. Sources said former majority leader and Ilocos Norte 1st District Representative Rodolfo Fariñas had a meeting with Arroyo on Tuesday night, July 24, to discuss the minority leadership. But she said she would leave it to the minority bloc to decide among themselves.

The House minority bloc is coveted by lawmakers because the duly recognized minority legislators are given membership slots in all committees. The slots are few, but they give the minority the power to vote during committee hearings. 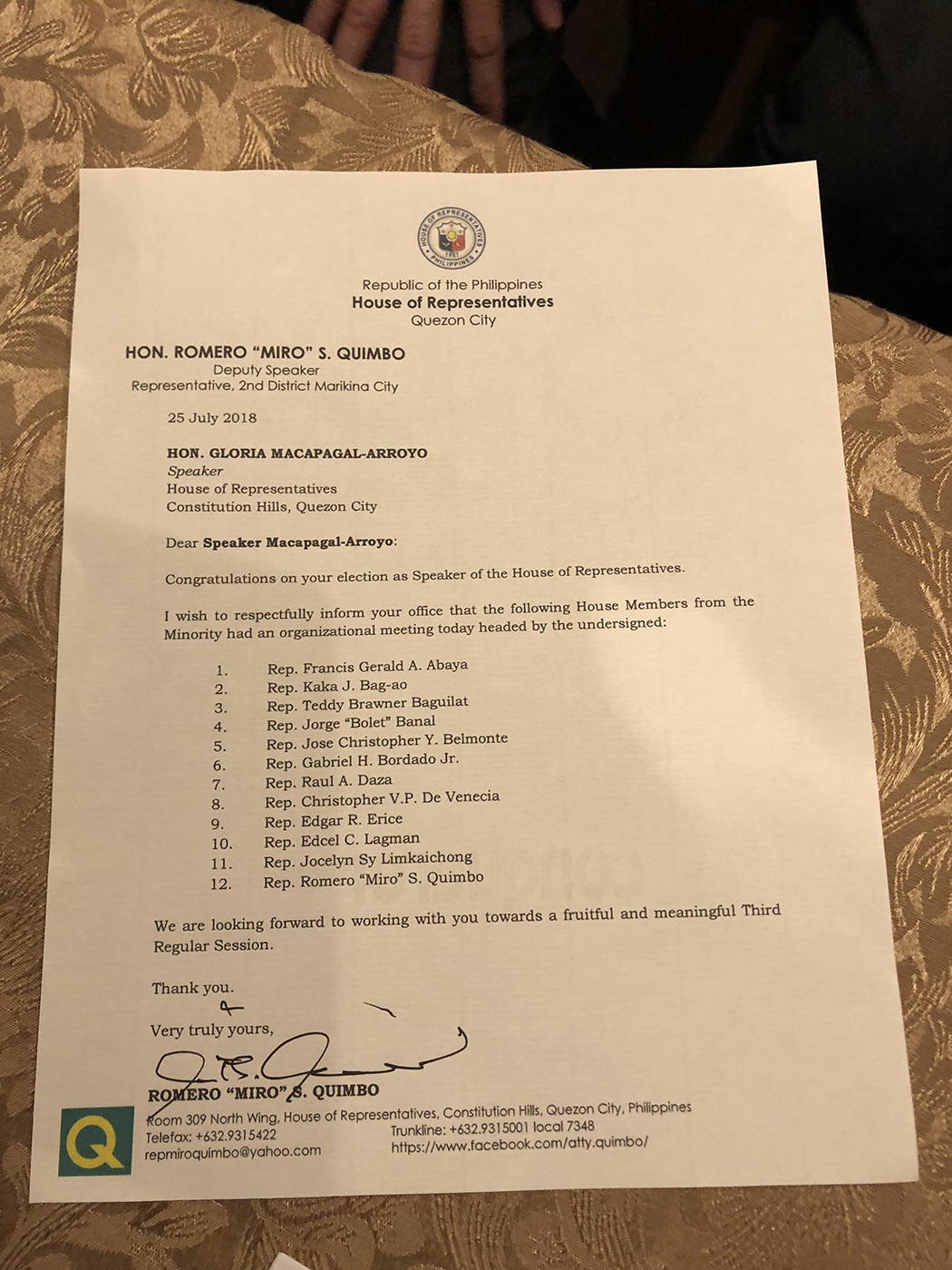 The House rules state: "Members who vote for the winning candidate for Speaker shall constitute the Majority in the House and they shall elect from among themselves the Majority Leader.... The Minority Leader shall be elected by the Members of the Minority and can be changed, at any time, by a majority vote of all the Minority Members."

Unlike the 12 LP lawmakers, however, AKO Bicol Representative Alfredo Garbin Jr from the Suarez bloc interprets the rules differently.

"We still maintain that we are the duly-constituted minority, as decided by the Supreme Court. What was declared vacant [on Monday, July 23] was only the position of the speakership. Everything else is status quo under the speakership of Gloria Macapagal Arroyo. Remember that in the absence of a minority, walang magiging session (there would be no sessions)," said Garbin, a lawyer.

But a day before, Suarez was already ready to relinquish his post. He told reporters he is moving to the majority and would nominate Buhay Representative Lito Atienza to replace him.

"I [was] contemplating on doing that, but the turn of events [made me rethink my position]. Kinonsulta ko members ko and sabi nila, kung aalis ka, aalis kaming lahat (I consulted  my members and they said that if I leave, they would all leave). The members asked me to [keep] our group intact," said Suarez.

But Quimbo, who is also a lawyer, said the Suarez's bloc view on the matter "has no basis under the law or jurisprudence."

(There is no basis at all. Former minority leader Suarez cannot be minority leader again because's already part of the majority.... He didn't just vote for Arroyo, he also signed the manifesto supporting her as Speaker.)

Quimbo admitted that there are 12 other LP lawmakers who either voted yes to an Arroyo speakership or were absent from the proceedings. Among those who favored Arroyo is Quezon City 4th District Representative Feliciano Belmonte Jr, former speaker. – Rappler.com

Mara Cepeda writes about politics and women’s rights for Rappler. She covers the House of Representatives and the Office of the Vice President. Got tips? Send her an email at mara.cepeda@rappler.com or shoot her a tweet @maracepeda.