MANILA, Philippines - The ruling Liberal Party and the United Nationalist Alliance (UNA) would dominate the senatorial race if elections were held today, a recent survey of the Pulse Asia said on Tuesday, December 11.

The survey said Senators Francis Escudero and Loren Legarda remain the top picks of Filipino voters for the 2013 senatorial race. At least 74.1% of voters will vote for Escudero while 69.3% will vote for Legarda.

Both are guest candidates of LP and UNA. They have been consistently topping senatorial surveys and alternately taking the top spot.

The 10 others who made it to the top 12 of the survey were a split from LP and UNA. Most, if not all, were seeking re-election. 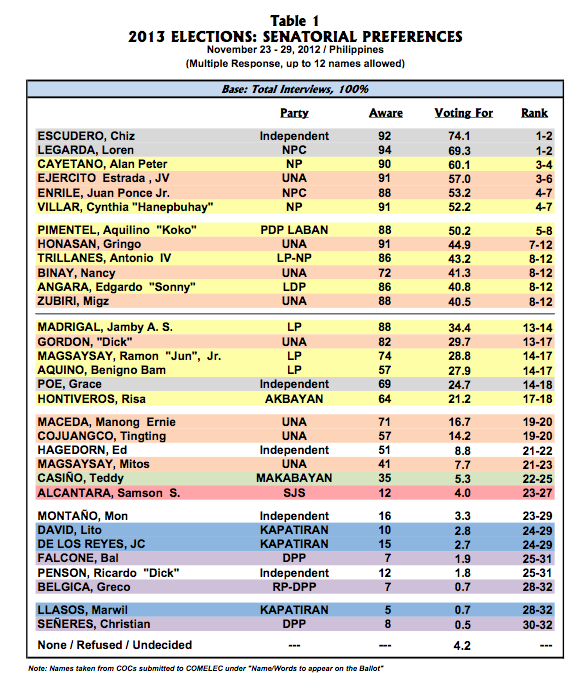 In the 3rd and 4th places is incumbent Sen Alan Peter Cayetano (60.1%), a guest candidate of LP; San Juan City Rep JV Ejercito Estrada of UNA gained 57% based on the survey, meaning he has a "statistical ranking of 3rd to 6th places.

Tailing the Magic 12 are 5 candidates running under the broad LP coalition and one from UNA. But they are behind by significant survey points - 6 to 19 points from 12th placer Zubiri.