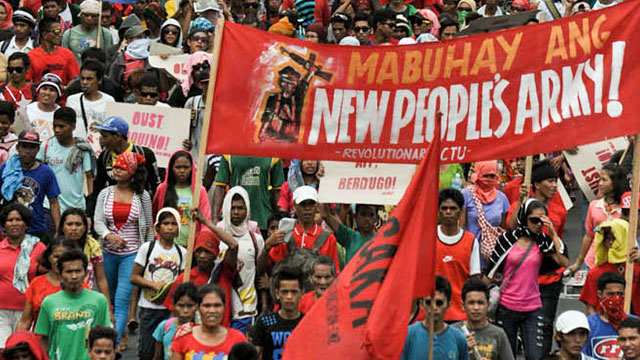 BAILIWICK. The Davao region is a bailiwick of the New People's Army.

Pfc Niño Alavaro and Pfc Marjon Añover were released after a ceremony by NPA rebels.

Aries Francisco, spokesman of the NPA's Comval-North Davao-South Agusan Subregional Command, earlier said that the the were detained at a checkpoint manned by communist guerrillas in Monkayo town, Compostela Valley, on September 30. Francisco claimed the two were on their way to a combat operation.

The military condemned the incident claiming that the soldiers, who are from the 25th Infantry Battalion, were not in an active military operation when they were captured.

Alavazo and Anover were riding a motorbike from their battalion in the municipality of Monkayo and were said to be on their way to their barracks in Barangay Kasuon, Compostela Valley Province.

Ruby dil Mundo, spokesperson of the NDF-P Southern Mindanao, told Rappler that "after thorough investigation by the custodial forces and the NDF-P, it was found out that PFC Marjun Anover and PFC Nino Alavazo were just following orders their superiors and hereby ordered the release of the POW."

Alavazo's escort Katrina told Rappler that the so-called POWs were treated "the way a POW is handled based on the international himan rights law." She added that since his arrival, Alavazo "has been crying because he thought he will be killed. There was a time when he got fever, he refused to eat because he was missing his family."

Alavazo told Rappler that the rebels did buy fruits, but that he did not eat "kasi akala ko papakainin kami pagkatapos patayin na kami." (I thought they would feed us and then kill us.)

Dil Mundo said that they were advised by the NDF-P to prepare for the release of the POWs on November 1.

Anover, in the vernacular, said that at they didn't believe they would be released until the rebels told them they would be freed.

The POWs thanked the NPA for keeping them safe in the 33 days they were in the rebels' custody.

Lucia Anover thanked the NPA for keeping her son alive and for his release. She told Rappler her son Marjun was the one paying the tuition of his brother Christian, now in his second year of college.

"We were worried my son could not enrol because his brother was abducted, but now I thank God he will be home safe, and his brother can still enroll for the second semester."

The POWs was brought to the East Mindanao Command at Camp Panacan, Davao City, where they will undergo stress debriefing.

Meanwhile, another soldier remains in the custody of the NPA, who has detained during an attack in Gingoog City in Misamis Oriental in July this year.

Lorena Mangahas, a local NPA spokesperson, said that Pfc Adonis Lupiba is set to be released, but the process was allegedly hampered by ongoing rescue operations by the military.

Duterte earlier said that the NPA will also turn over to him P25,000 that was recovered by the rebels who captured and killed Loreto town mayor Datio Otaza and his son in Butuan last month.

"When they searched the bodies, the NPA found P25,000 and they issued a statement that they want to return it because they do not want to be called a bandit. Because taking it is a bandit's act and they are not bandits. What they are doing is based on ideology. They will include it after they release the soldiers," Duterte said.

Duterte said that he made an effort to communicate with the NPA to release the soldiers because their families approached him and asked for his help.

"I ask them (NPA) if the soldiers do not have serious offenses against the people they should be released immediately because it is almost Christmas," Duterte said. – With reporting by Karlos Manlupig / Rappler.com