BACOLOD CITY, Philippines - Families of the victims of extrajudicial killings in Escalante City, Negros Occidental called on President Benigno Aquino anew to act on the killings.

About 8,000 residents joined a rally on Saturday, April 20, to demand justice for the victims of extrajudicial killings in the city since 2007.

According to Luke Espiritu, counsel of the victims, such killings have claimed 25 lives in the city.

Tessie Villadar Damalerio, whose son and brother were among victims, said President Aquino and Interior and Local Government Secretary Mar Roxas should immediately act on the findings of Task Force Escalante, the body that investigated the deaths.

The report of Task Force Escalante was submitted to the Department of Interior and Local Government (DILG) last year.

"Do we have to wait for another killing to take place before you act?" Damalerio asked.

Police records showed that majority of killings in Escalante, the most recent being the assassination of Police Officer 1 Beijen Tanguan and police asset Joseph Lutrago, were perpetrated by the New People’s Army (NPA).

Lutrago's brother, Jonathan, who also participated in the rally, claimed that NPA rebels behind the killings are in the payroll of a politician. 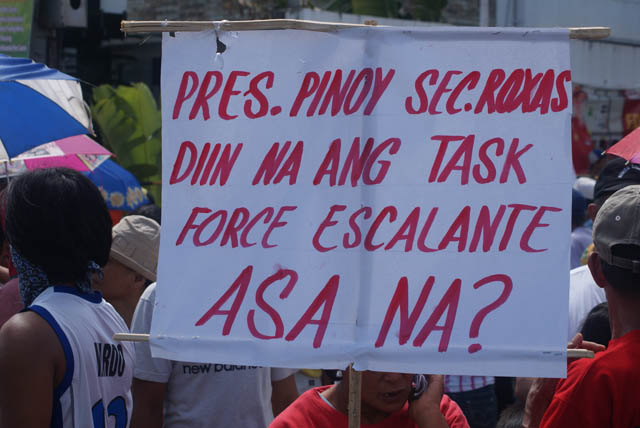 Espiritu said the culture of impunity in Escalante is too much already. “The government has to intervene now, replace the policemen and place Escalante under Comelec control,” he added.

The call to place the city under Comelec control is being supported by re-electionist governor Alfredo Marañon Jr. and Escalante mayoral candidate Santiago Barcelona, who were both present in the rally.

Barcelona, who is running against reelectionist mayor Melecio Yap, said 18 of the 25 victims of extrajudicial killings in the city were his supporters.

Yap and 8 others, including a retired Army major and a former policeman, were charged last week for 3 counts of murder and two counts of frustrated murder in connection with the spate of killings in the city.

On the other hand, supporters of Yap also held on Saturday a prayer rally, just 250 meters away from the rally attended by Marañon and Barcelona. 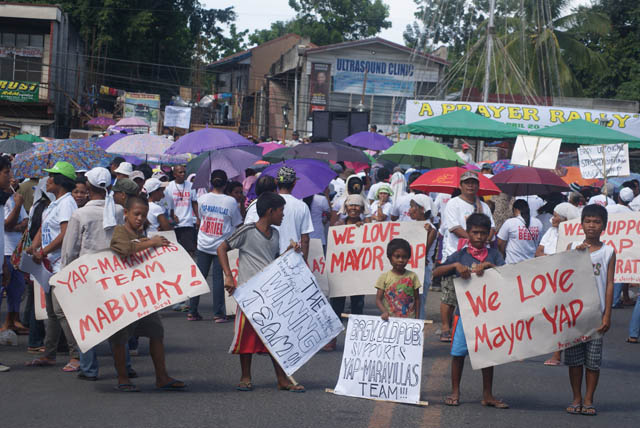 Yap said he welcomes the charges filed against him. He said he wants to clear his name in the proper forum. At the same time, Yap also warned he would file counter-charges against those who he said fabricated lies about him.

His lawyer, Dan Pondevilla, questioned the motive for the filing of charges against Yap. "Why only now, when the election is about to happen?"

Pondevilla added the claims have no basis, and that many killings have already been solved and suspects were charged in court.

Yap also dismissed Marañon's previous comment describing the killings in Escalante as worse than the Maguindanao massacre. The reelectionist mayor said the statement is “unfair to Escalantehanons.”

"Why is he (Governor Marañon) frequently visiting Escalante, if the place is not peaceful? It is because he is afraid to lose," he added.

In 2011, Yap was stripped of his supervisory power over the local police following allegations that he was sympathetic to the NPA, and because of the killings in the city.

Escalante falls under Category 1 of the Comelec watchlist due to the employment of private armed groups by candidates and intense political rivalries. - Rappler.com