Many UP Diliman students fought against the dictatorship. Some of the most prolific symbols of resistance were also members of the UP community. 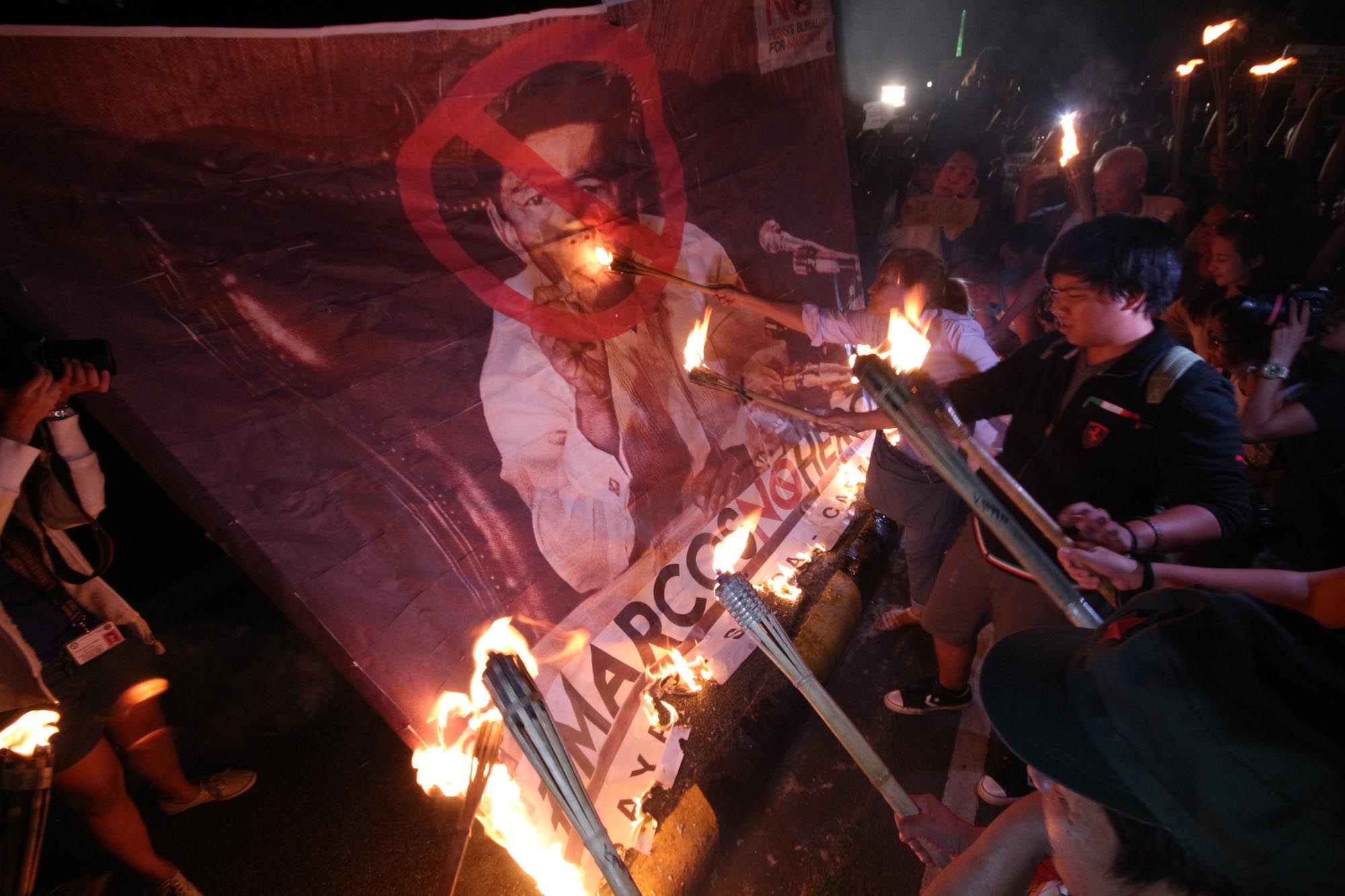 NEVER AGAIN. UP students and Martial Law victims torch a large picture of the late dictator Ferdinand Marcos in a protest rally at the UP compound to condemn the Supreme Court's decision granting hero's burial of in the Libingan ng mga Bayani.

Candles were also lit in the University of Sto Tomas in Manila, with the university's Central Student Council saying, "Let the fire of justice prevail until the end. We stand against the Marcos burial at the Libingan ng mga Bayani." 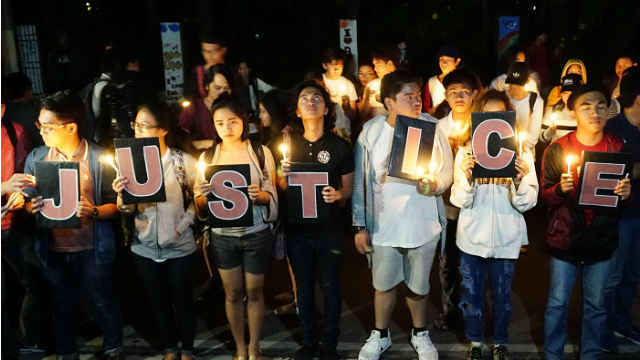 In Baguio City, where the SC holds its sessions during summer, activists lit candles and held signs of protests in front of the SC building.

In Legazpi City, Albay, Vince Casilihan of Bayan-Bicol said that the High Court's decision is a total disgrace and disrespect to the victims of martial law and to the country.

“The highest arbiter of the land...ruled in favor of the Marcoses, discounting the plight of the martial law victims. Allowing Marcos to (be buried) at LNMB will not heal the old wounds as this will only exacerbate the pains and sorrow of the Martial law victims,” Casilihan added.

Negros Occidental Vice Governor Eugenio Jose Lacson said that he was “sad" because “the moral issue was completely disregarded.”

Christian Tuayon, secretary-general of Bagong Alyansang Makabayan-Negros (Bayan-Negros), also condemned the decision of the high court. “We’re not only sad, we are outraged with the decision,” he said, as he stressed that this is a “big insult” to the victims of the Martial Law.

Meanwhile, Third District Representative Alfredo Abelardo Benitez said the decision means its time to move on. "Let history be the judge of the person, not the place of his burial," he said. 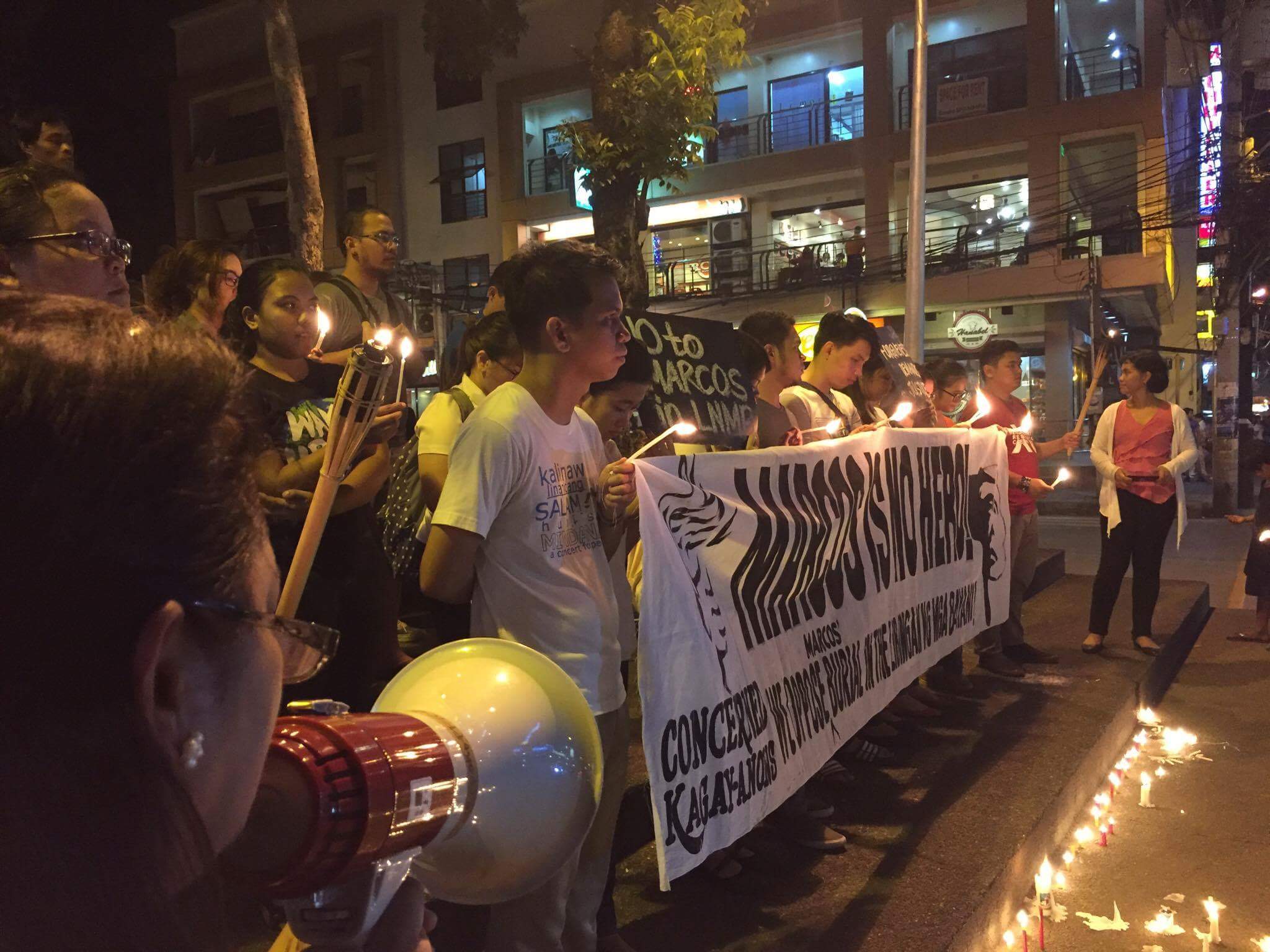 Anti-Marcos protesters in Cagayan de Oro City flocked to Magsaysay Park to express their dismay and disapproval over the Supreme Court decision.

“This only means that (the Supreme Court) favors the current state of the country; (that it) should remain in the shadow of the dictator, and the power of the Marcos. (It) neglected Marcos’ accountabilities to the people during martial law,” Vennel Chenfoo of Kabataan Partylist said.

Former political detainee and journalist Hugo “Ka Gerry” Orcullo said that what the Supreme Court did was to twist the history of the country. 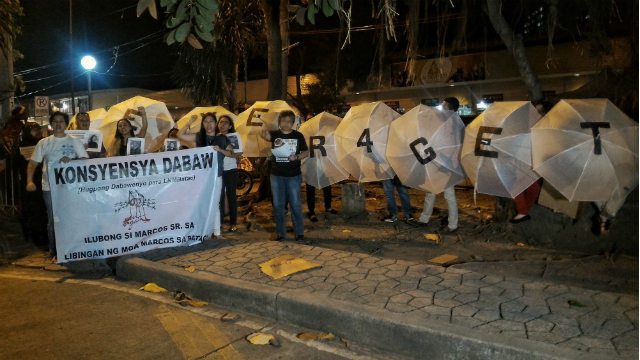 The College Editor’s Guild of the Philippine also released a statement on the SC decision, saying, "the burial of the late dictator is a gross act of disrespect and an injustice to the countless media men and Guild alumni who, during the US-Marcos regime, fought tooth and nail against the blatant oppression, and asserted the freedom of the press and expression."

Meanwhile, reception to the decision was lukewarm in the cities of Dipolog and Dapitan. There were no rallies and discussions. Lawyer Anecito Young, who owns two local weekly tabloids in the area, said he is neither against nor in favor of Marcos' burial at Libingan ng mga Bayani, "but at least we now have a closure."

Praxides Rubia, spokesman of the governor and secretary-general of Liberal Party-Zamboanga del Norte Directorate, said he does not care about the decision since the decision will not have an impact in Zamboanguenos way of life. – with reports from Mauricio Victa in Baguio, Rhadyz Barcia in Legazpi, Marchel Espina in Bacolod, Gualberto Laput in Dipolog, Bobby Lagsa in Cagayan de Oro/ Rappler.com