Fil-Am runs for SF board of supervisors

SAN FRANCISCO, USA – While Filipinos outnumber other Asian Americans in the Golden State, they cannot claim to have the same political clout that Chinese American residents have.

Working mother Marjan Philhour wants to end the disparity and go where no Filipino American has ever been: the San Francisco Board of Supervisors, the legislative body that, along with the mayor, governs the one city in the United States that is also a county.

Both board and mayor are elected and administer an annual budget of some $6 billion.

“Despite being the fastest growing and largest Asian American population in California, the Filipino American community has not yet succeeded in translating its activism into elected leadership commensurate with its size,” Philhour told Rappler. “I do believe that is changing, and the time is now for us to reap the benefits of our growth and activism."

A few Fil-Ams have waged campaigns for a seat in one of the 11 districts. Former Planning Commissioner Myrna Lim came within striking distance of the post but didn't quite reach it. She ran in heavily-Filipino District 11 in 2004, 2008, and 2012.

Since then, no Fil-Am has posed a serious challenge to the board that has launched many Asian American political careers.

With her background as a legislative strategist, Philhour possesses both charm and savvy required by the job, say supporters.

District 1 is the home of Sea Cliff, address of million-dollar residences owned by film stars, industrialists, and venture capitalists.

If elected next year, Philhour would keep governance with a deep Asian sensibility and multicultural outlook.

The candidate, 41, was born in San Francisco to Alicia Payuran Tinitigan, who came from Cavite. Her father Mark Ghafourpour was born in Tehran. Her parents moved to the United States in 1968, she said, “for educational and professional opportunities” but kept their children connected to their roots.

“Until my early teenage years, I would spend my summers and Christmas or New Year's at my grandmother's house in Manila,” Philhour recalled. “Each visit strengthens my relationship with my extended family and further reinforces my identity as a Filipina. The rich history and traditions of the Philippines are a large part of how I was raised and ingrained in my family.”

At press time Philhour had just arrived in Manila for the wedding of a cousin. 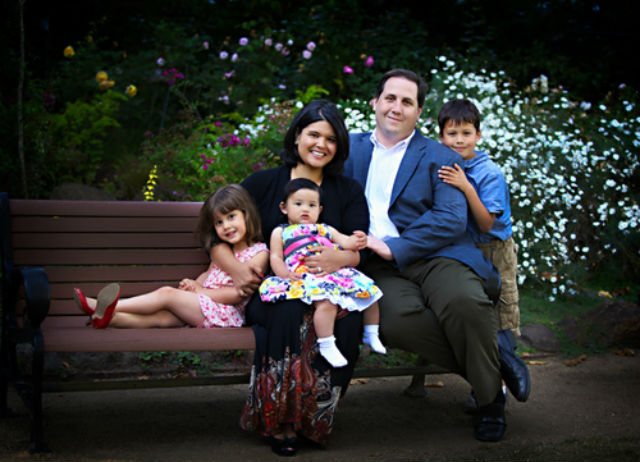 Family solidarity is among commonalities she found in her cosmopolitan household.

“Having parents of two different ethnicities is very special,” Philhour said. “My father has taught me so much about Persian culture and customs; however, I have only been to Tehran once in 1978. We have not been back since, although I have relatives who live there. We celebrate holidays with my father when we are together, as well as with my Persian relatives. I find that the Persian and Filipino cultures have many similarities, especially with respect to honoring family.”

She is married to Byron Philhour, a doctor of physics who teaches at San Francisco University High School. They have 3 children: Joey, 8; Sophie, going on 6, and Natalie, almost 2.

Outside the home, the University of California Berkeley alum presides over Philhour & Associates, a consultancy firm sought by clients from both nonprofit organizations and Fortune 500 companies. Here, she makes use of her understanding of the inner workings on Capitol Hill, where she worked as legislative aide for Democratic members of Congress beginning in 1996.

In 1996, she held the title of "special assistant" in the office of United States Representative Tom Lantos, the lone Holocaust survivor lawmaker who served for San Mateo County from 1981 until his death in 2008. She represented her boss at meetings with community groups, "developed outreach plans for the growing Bay Area district, developed and supervised strategy with federal, state and local agencies to address constituent issues in immigration, education, and the environment."

She picked up a few more skills as an aide to Congress members Nita Lowey of New York and then Lynn Rivers of Michigan. She then joined the administration of Governor Gray Davis in Sacramento, who was later recalled and replaced by Arnold Schwarzenegger in 2003.

Philhour's star rose. She helped direct finance and coordinated caucuses for the presidential campaign of then-senator now State Secretary John Kerry and continued crafting fundraisers for US Representative Joe Nation before spreading her wings as an independent contractor.

She then started a consultancy in 2009.

In 2013, she unveiled Phlihour & Associates with herself as president. The firm provides "counsel and oversight to political campaigns, non-profits, and private corporations in the areas of fund development and strategy, or special projects (communications, event management) as needed."

She specializes in issues about women, health, labor, and the environment.

Her commitments include “building the bench” of women in politics and business, goading other women to seek representation in government while integrating professional goals into daily life.

Like her role model Hillary Clinton, Philhour breaks barriers. In her birthplace, San Francisco, where Fil-Ams have long been excluded from the table of decision making, that obstacle may as well be called the “Adobo ceiling.”

Clinton has proven effective “serving the role of mother and career professional,” said her FilAm admirer.

“Because of women like her, my daughters and son, will grow up in a world where men and women can do jobs as equals,” said the graduate of Emerge California, part of a 14-state network conducting a seven-month training program for women Democrats to knock down walls for political aspirants.

Philhour considers her public service record as equal in importance to her role as a mother. “Mothers are able to bring a different perspective, and I think as we legislate and make our laws, diversity and perspective are very important,” she said.

Proudly identifying as a mother may yet be what catapults Philhour to the seat that has eluded Filipino Americans. – Rappler.com