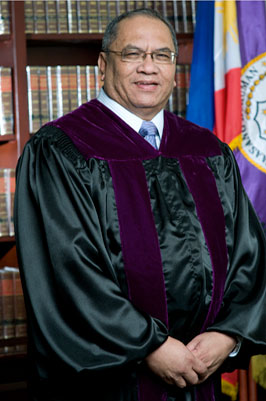 MANILA, Philippines - A lawyers group has nominated Supreme Court Justice Jose Perez to replace former chief justice Renato Corona, the first SC insider aside from the 5 most senior SC justices to be recommended to the highest post in the judiciary.

The Asia Pacific Bar Association -- through its president Purisima Buyco -- nominated Perez, who served as court administrator before he was appointed by then President Gloria Macapagal-Arroyo to the SC in 2009.

By nominating Perez, the group also urged the Judicial and Bar Council -- the body which vets aspirants for the judiciary to the president -- to also consider all the other 10 justices in the selection process for the next chief justice. (There are 15 justices in the SC).

"Perez is a venerable resident of the highest court for all of his professional life. In 1971, while still in his law study, he became a technical assistant of the court. After he graduated from the UP College of Law the following year, he joined the roster of lawyers as a legal assistant in the office of the reporter and subsequently became the court administrator prior to his appointment as a member of the court in December 2009," the group said.

"In a nutshell, he is a career member of the judiciary now serving as one of the independent jurists."

Meanwhile, 15 "outsiders" have been nominated to the post. Commission on Elections official Rene Sarmiento and Dean Amado Valdez of the University of the East College of Law were nominated on Friday, June 15.

Aside from Legarda, Pangalangan also accepted his nomination.

The only applicant for the post is a certain teacher and nurse, Jocelyn Esquivel.

The JBC will accept applications and nominations for the post vacated by Corona until June 18. Corona was found guilty by the impeachment court of violating the Constitution and betraying public trust after he failed to declare P183 million in peso and dollar bank deposits in his statement of assets, liabilities and net worth. - Rappler.com