Defense: ex-CJ will decide our next move 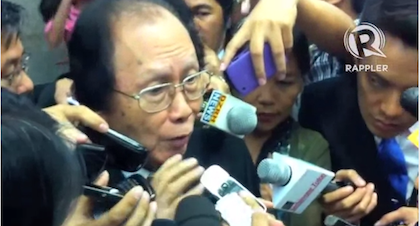 LEAD COUNSEL. Lawyer Serafin Cuevas says the defense will be very careful and circumspect about its next moves.

(UPDATED) MANILA, Philippines — To go to the Supreme Court or not?

Whether the defense will appeal the ruling of the impeachment court or not is up to the respondent himself: ex-Chief Justice Renato Corona.

"We will be considering all our options and waiting for instructions from the Chief Justice," defense counsel Judd Roy told the media after the verdict was declared. "The Chief Justice will decide."

Hours after the verdict was declared, Corona's lawyers trooped to The Medical City, Pasig City to discuss with the ex-Chief Justice their next moves. Their meeting took over two hours, with Corona's lawyers leaving the hospital at around 10:30 p.m.

In an interview with reporters after the meeting, lead defense counsel Serafin Cuevas said their camp has not yet decided what to do next. “That's not a simple matter... it's so difficult,” Cuevas said in a mix of English and Filipino.

On Tuesday, May 29, the Senate impeachment court, after almost 5 months of trial, decided to convict Corona on a vote of 20-3.

Earlier at the Senate, defense counsels told the media they accepted the verdict, and that they would discuss their next move as a group.

"Much like we had our own interpretation, they (the impeachment court) are entitled to that. We may not agree with the way they have disposed of the course," said lead counsel Serafin Cuevas. "But decidedly how could that be a source ofsama ng loob (anger)?"

He also said they would need to think long and hard about turning to the Supreme Court to appeal the decision, an option available to the defense if they think the impeachment court exercised grave abuse of discretion. He also acknowledged the possible backlash to such a move.

Roy, on the other hand, told the media he already saw at least one thing wrong with the decisions.

"The evidence against him was insufficient and poor quality but despite all of this, a judgment of guilty was rendered," he said.

He added that what the defense and the senator-judges basically disagreed on was Corona's interpretation of the confidentially of the foreign currency deposit law but one question that was not raised was how everybody viewed this provision.

"If everybody regards this [confidentiality] as some kind of community standard because there's no clear categorical ruling then it's unfair to make him liable," said Roy. "Many times they said, 'Henceforth…from now on.' That is like saying before this day there was no such ruling."

Meanwhile, other lawyers from the defense team expressed their opinion that although possible, asking the Supreme Court to intervene may not be necessary.

Cuevas also expressed surprise over the overwhelming number of the votes that favored Corona's conviction.

"Hindi namin akalain (We didn't expect this)," he admitted. "In fact, kala ko nung primero, tabla-tabla lang (I thought at first, it was even)."

He said he personally thought the prosecution would struggle to get 16 votes, but was instead shocked at the outcome.

"I myself was totally surprised. Kung matalo kami, hindi naman ganun (I thought if we were to lose, the gap wouldn't be this big)," he said.

Despite this, Cuevas insisted he would not have done anything differently.

Cuevas reiterated that they had called Morales as a hostile witness to bely claims that Corona owned $10-M, and that the Anti Money Laundering Council report, which she based her testimony on, should not have been accepted as evidence since she herself had admitted it was "unauthenticated" because it did not have a court order to back it up.

He added that he did not regret putting Corona on the witness stand either, even if senator-judges pointed to his admission of not including assets in his SALNs as the reason for their decision to convict.

"No regrets. Siya (Corona) may gusto niyan eh," he said, explaining Corona himself decided he wanted to testify.

Reacting to the verdict, Corona expressed sadness and reiterated his innocence. In a statement, he said he accepted the decision and did not mention the possibility of turning to the Supreme Court. - with a report from Paterno Esmaquel II/Rappler.com