Who's afraid of North Korea's rocket? 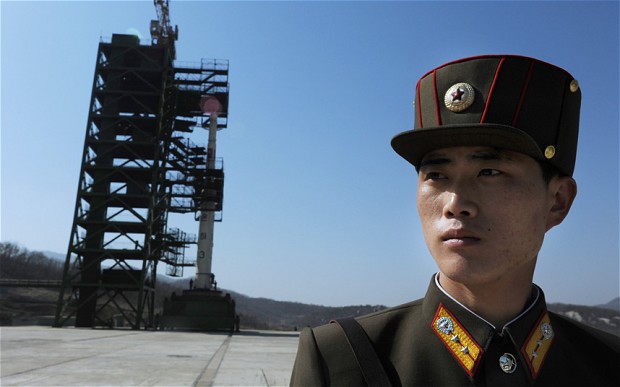 READY FOR LIFTOFF. A North Korean soldier stands guard in front of an Unha-3 rocket at Tangachai -ri space center on April 8, 2012. North Korea has confirmed their intention to launch the rocket this week (between April 12-16) despite international condemnations.

MANILA, Philippines - Who's afraid, and who's not afraid of the North Korean rocket launch?

The controversial rocket launch, which could happen any day between Thursday, April 12, and Monday, April 16, elicited a wide range of responses from various sectors.

Pyongyang has scheduled the launch with a 5-day window, saying the "historic" event is a centerpiece of celebrations marking the 100th anniversary of the birth of founding leader Kim Il-Sung on April 15.

The rocket is ostensibly designed to put an observation satellite in orbit, but the United States and its allies say it is in fact a ballistic missile test by the nuclear-armed state in violation of a United Nations ban.

A Unha-3 rocket, which analysts and experts say is similar to the Taepodong-3 rocket, will launch a home-built, polar-orbiting earth observation satellite known as Kwangmyongsong-3, a spokesman for the Korean Committee for Space Technology said in a statement.

On Thursday, the North said it had installed the satellite payload and fueled the 30-meter (100-foot) rocket, but officials in South Korea and Japan said there was no sign that liftoff was about to happen on Thursday morning.

But noon in North Korea came and went with no sign of the launch, as the country prepared mass festivities to mark the anniversary on Sunday with tens of thousands expected to appear in Pyongyang's vast Kim Il-Sung Square.

North Korea is adamant its rocket launch does not amount to a banned intercontinental missile test and says it has every right to send the satellite up, as it promotes the untested leadership of Kim Jong-Un who is in his late 20s.

The government, specifically the National Disaster Risk Reduction Management Council (NDRRMC), has been on alert ever since news about the launch broke.

The Department of National Defense (DND) was the first to sound the alarm in the country, after North Korea sent official word to the International Maritime Organization (IMO) that the second stage of the rocket would splash down 190 kilometers (118 miles) east of northeastern Philippines.

Defense Secretary Voltaire Gazmin said Thursday, March 22, that the Philippines will need the help of the United States to track the rocket.

As the launch period drew near, the NDRRMC, along with concerned government agencies, started preparations for the launch.

Starting last Tuesday, April 3, a no-fly, no-sail, and no-fishing zone was declared in the area off the coast of northeastern Luzon, which the DPRK identified as the second "drop zone" for the rocket it will launch.

Airlines' flight paths will be diverted during the duration of the possible launch, while fishermen and ships are told to avoid the splashdown zone.

The disaster management agency then said the Philippine Nuclear Research Institute (PNRI) "suggested" a "stay-indoors" policy for nearly the entire Luzon area, at the schedules of the possible launch.

This, however, was refuted by PNRI Director Alumanda de la Rosa. The agency head said it was not the source of the recommendation, which was released by the NDRRMC.

PNRI said information gathered by the institute points to the launch not involving any nuclear material.

"For us, [asking people] to stay indoors has no basis if you talk about the threat of radioactivity because the missile is not radioactive. But Defense Undersecretary (and NDRRMC Administrator) Benito Ramos may have some other threats in mind…That should not be attributed to PNRI," she told the Philippine Daily Inquirer on Monday, April 9.

Despite this, the agency will continue its regular radiation monitoring, and will closely monitor the launch.

As the launch date neared, the NDRRMC further stepped up its warnings to the public, and deployed military and emergency personnel in areas that could receive the debris from the rocket.

Some 50,000 military personnel went on full alert Thursday, April 12, and Navy and Coast Guard ships started conducting sweeping operations in the seas around the splashdown area.

The government also deployed an evacuation plan in critical areas, citing a possibility of "mass casualties."

The Department of the Interior and Local Government (DILG) has also instructed local government units in 6 regions, all in Luzon, to take "all precautionary measures to prevent loss of lives and property."

On the other hand, leftist groups have been criticizing the government's reaction to Pyongyang's planned launch, saying it is "overreacting," especially regarding the possible nuclear threat.

"The Palace and NDRRMC are making a nuclear warhead out of rocket debris," the Kabataan Partylist, through its spokesperson Terry Ridon, said Wednesday.

"After being rebuked for dishing out absolutely unscientific statements, the Palace and Ramos are now making much of a seeming 'particulate' chance of human error," Ridon said, reacting to Ramos' statement that the country is "within striking distance" of the launch.

"If all Ramos' logic on flight error would be believed, then no one should ever be outdoors for as long as airplanes soar the skies. But of course that would be stupid," he said.

The partylist defended North Korea, saying it has the right to launch its own satellites. The group also said that the real concern should be the increase American military presence in the country.

This was echoed by Bagong Alyansang Makabayan (Bayan), saying the US is trying to "deny North Korea’s sovereign right to launch a satellite for peaceful use by hypocritically using the specter of nuclear weapons."

Bayan said the government has "uncritically" joined the US in "hyping the so-called nuclear threat" of the launch.

"While safety precautions against rocket debris are ok, the reaction of the Philippine government is more in line with the hype being stirred by the US in relation to so-called ballistic missile tests that the North Koreans are allegedly undertaking," the group said in a statement, released Tuesday.

Bayan also said the rocket launch is being used to "justify continued US military presence in the Philippines."

"The PH government is up in arms over North Korea’s rocket test, but is eerily silent about the use of US drones in Philippine airspace. The PH government has not even sought any explanation for the US government’s secret storage of nuclear weapons in the Philippines during the last century," Bayan secretary general Renato Reyes Jr, was quoted as saying.

Even Sen Miriam Defensor-Santiago warned the government about asking help from the US government, even to track down the rocket, to avoid putting the country on Pyongyang's radar.

Defensor-Santiago said increased US presence would help brand the Philippines as an "enemy state," putting us at risk, she said in a recent interview.

Other lawmakers have also expressed concern over "panic mongering," with Alliance of Concerned Teachers (ACT) party-list's Rep Antonio Tinio, in a statement on Sunday, April 9, saying the government is "sowing unwarranted fear and panic."

"Usec Ramos even refers to [the rocket] as an Intercontinental Ballistic Missile or ICBM, evoking the doomsday weapon of the Cold War. Such exaggerated language is totally inappropriate coming from a bureaucrat in charge of ensuring public order and safety," Tinio was quoted as saying.

"[Why] ask the whole population of Luzon to stay indoors? It’s totally out of proportion to the danger posed by the rocket debris, which is expected to fall in Philippine waters some 200 kilometers east of Luzon," Tino said.

Church leaders have also joined the fray, with Sorsogon Bishop Arturo Bastes comparing the situation to the 1979 Skylab incident where people feared debris from the experimental space station would fall on land. It later fell over a sparsely populated area in Western Australia.

The government, specifically NDRRMC's Ramos, defended its actions, saying it is better to overreact in this situation.

"This is necessary information and education for our people…You cannot expect me to say there is no problem here," Ramos said.

Ramos also lashed out at critics of the government response, saying people would understand the situation better if they knew how it is to lose soldiers in battle -- as is his experience when he was still in the Special Operations of the Army.

Ramos also admitted the PNRI did not issue the "stay indoors" recommendation, and said he was only concerned about the rocket debris crashing on land.

'No need for alarm'

Local astronomers, meanwhile, said there is no need to fear the rocket.

Maximo Sacro, founder of the Philippine Astronomical Society, said in an interview on ABS-CBN News Channel's Headstart on Thursday that the rocket's second stage will most probably fall to the sea, not land.

He also said that the booster stage that will fall near the Philippines is just 8 meters high and 2.5 meters in diameter. If it happens to fall inland, the maximum area it will affect will be 1 square kilometer, Sacro said.

North Korea has been working on its missile program since the 1970s, attempting to develop short- and long-range missiles. At least 2 rockets are estimated to reach targets between 4,000-6,000 kilometers from North Korea -- a distance which would include China, Russia, Alaska, and parts of Southeast Asia, including the Philippines.

The Hermit Kingdom's rocket launches have seen little success over the years.

In 2006, 7 missiles test-fired by the North, including the long-range Taepodong 2, exploded just after 40 seconds. In 1998, an early attempt to launch a satellite flew over Japan during a test.

Its most recent launch was back in April 5, 2009, when it launched a long-range rocket which flew over Japan and landed in the Pacific Ocean. It was also branded by the regime as an attempt to put a satellite into orbit, but the US, Japan, South Korea and the UN did not buy into it.

The 2009 test was also seen as a failure. - With reports from Agence France-Presse