Antonio Carpio: The man on the bench

(Newsbreak wrote this profile on Supreme Court Associate Justice Antonio T Carpio in a Dec 4, 2006 issue. We are republishing it now as Carpio, being the most senior justice in the High Tribunal, becomes acting chief justice, following the removal of Renato Corona. A PDF version of the story as published on Newsbreak is embedded below.)

MANILA, Philippines - “Let us not…delude ourselves into believing that a new constitution would immediately eradicate the ills that plague our country. Nor can we expect that tinkering with the constitution will totally purge it of its defects and make this nation great again…. One thing we cannot afford to overlook nor downgrade is the importance of the human element. A basically workable constitution or law can become defective in the hands of enthroned rascals, as we are now experiencing,” wrote Antonio Tirol Carpio.

No, this was not written recently but was penned by him when he was a 20-year-old senior economics student of the Ateneo de Manila University in 1969. Published in The Guidon, of which Carpio was then editor in chief, the piece mirrored tumultuous times.

Before graduating in 1970, Carpio wrote in his last editorial about the seeming inevitability of a revolution, given the pervasive and severe inequity prevailing at the time. Yet he lamented the fragmentation of revolutionary forces and their inability to overhaul the system. “A revolution is something that cannot be left to accident. It has to be a deliberate and organized action.” 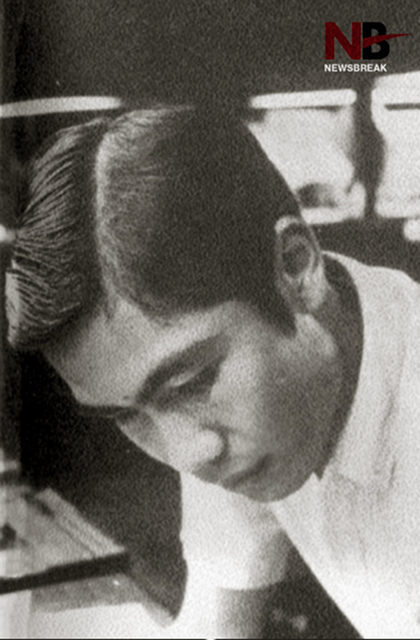 Carpio during his younger days at the Ateneo

Sigma Rhoans entangled with rival Alpha Phi Betans who, at the time, were headed by Oscar Orbos, who would later become congressman and then governor of Pangasinan. The ensuing rumble resulted in casualties on both sides and, following command responsibility, fraternity leaders Orbos and Carpio were suspended from law school for a year. Orbos managed to have his suspension reduced to one semester, however, and graduated on time in 1975.

Carpio, who was a year ahead of Orbos and was in third year when the rumble erupted, ended up graduating in 1975 instead of 1974. “This was part of the adventure of growing up,” says an Alpha Phi Beta member who recalls events that happened at the time.

It was in UP, too, that Carpio was introduced by former beauty queen and later activist Nelia Sancho to his future wife, Vietnamese Ruth Nguyen, with whom he would have two children, now both college graduates.

“It was useless to be a lawyer then,” Carpio told people he knew before he was appointed to the SC, but he nevertheless pursued his law studies “because his father wanted him to.” His father Bernardo Carpio, who was former regional director of the Bureau of Internal Revenue in Davao, wanted his youngest to be a lawyer like him.

When martial law was declared in 1972, Carpio was in his second year in law school and like most law students, was reading the SC decision on the case of “Javellana vs Executive Secretary,” of then Alejandro Melchor. In that case, the High Court ruled that the 1973 Constitution drafted by the 1971 Constitutional Convention was ratified in accordance with the 1935 Constitution.

What made the decision controversial at the time was the declaration of martial law in the middle of the convention in 1972 and the absence of real debates on the draft Constitution that Marcos wanted the people to ratify through a plebiscite.

“It was a decision issued under the gun of the martial law regime,” Carpio is quoted by an associate as having previously said. It was precisely the repression of the period that left an indelible mark on the man who would become SC justice. It would also explain some of the important decisions he penned as a member of the High Court.

The path to FVR

“Tony would philosophize the needs of society,” says PR consultant Antonio Abaya, who recalls that the night before EDSA 1 broke, he, along with Carpio, were supposed to meet with Jesuit priest Joaquin Bernas who had access to Corazon Aquino, the widow of slain Sen. Benigno “Ninoy” Aquino Jr. Already in private practice with the firm he co-founded with partners F. Arthur “Pancho” Villaraza and Avelino “Nonong” Cruz Jr., Carpio was ready to risk his firm and connect with the mutinous Reform the Armed Forces Movement, says Abaya.

Years later, as the Aquino government remained vulnerable to coup attempts—the most serious of which was the 1989 Makati siege—Carpio joined the political fray as he got into the circle of Fidel Ramos, whom he did not know personally although they were neighbors in the posh Ayala Alabang subdivision. Abaya says it was the late Teodoro Benigno Jr. who helped connect them directly with Ramos.

Regular meetings in Alabang followed in mid-January 1990 for purposes of analyzing the prevailing political situation. These eventually gave birth to Ramos’s Alabang Group which was a merger of his Rotarians’ group and his neighbors’ circle. That Carpio and what was then the Carpio Villaraza & Cruz (CVC) law firm would play a major role in the Ramos presidency and become ascendant in the process is already widely known.

In the 1992 presidential elections which Ramos eventually won, the three partners of the firm had different political leanings but respected each other’s preferences. While Carpio was for Ramos, Villaraza was batting for Eduardo “Danding” Cojuangco Jr., and Cruz was for Jovito Salonga.

All three combined were a formidable team. While Villaraza was “tactical,” Cruz was “strategic,” and Carpio, the most serious of the three, was “more deliberate,” says Abaya. Carpio put his passion behind whatever he targeted.

He took to sailing, hunting, and sharp shooting, believing that the latter was the best protection he could possibly have.

What is not widely known is Carpio’s reason for leaving Ramos in 1996, four years after serving as his chief presidential legal counsel. As legal counsel, he was instrumental in breaking up monopolies in the telecommunications and shipping industries, the same stranglehold which contributed to societal inequities, and which he already saw as a college student. 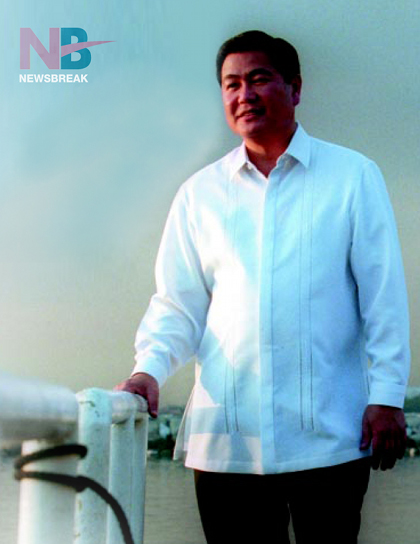 MAN ON THE BENCH.

Carpio went against Fidel Ramos, his former boss, in his ponencia on the PEA-Amari deal, which the High Court voided in 2003

Early talk about constitutional amendments and the possibility of extending the term of Ramos did not sit well with Carpio because he thought it was not in accordance with the spirit of the Constitution. And it put him at loggerheads with its proponents. It marked a key policy difference between him and his boss who did nothing to stop those lobbying for it.

It was after Carpio’s departure that the People’s Initiative for Reform, Modernization and Action (PIRMA) was given an aggressive push by then Budget Secretary Salvador Enriquez Jr. and spouses Alberto and Carmen Pedrosa, with the backing of then National Security Adviser Jose T. Almonte. The efforts came to naught when brought to the SC, however.

Publicist and Ramos media consultant Ed Malay describes Carpio as having enjoyed the confidence of the former President. “Hindi political, tahimik. He would not even exchange banter…. He did not smoke. He would attend meetings and stay for a while; he rarely attended political meetings.”

Malay says that despite the association with Ramos, Carpio showed his independence from his former boss. One of his first decisions as associate justice involved the Public Estates Authority-Amari Coastal Bay Development Corp. deal, which the High Court voided in 2003.

Written by Carpio, the decision upheld the Constitution which prohibits the sale of public lands to private corporations. The deal was first negotiated under Ramos’s term and renegotiated under the administration of Joseph Estrada. “Akala ko ba kakampi natin (I thought he was with us),” Ramos is quoted as saying after the SC released its decision.

“The most important qualification of a judge is independence, not brilliance,” Carpio had told a former associate, and that explains his actuations in the SC.

Out of the box

He went into private practice before forming the firm in 1980 with Villaraza and Cruz. While the three went their separate ways after law school (the three are Sigma Rhoans), they promised to keep in touch and get together when anyone felt he had gained sufficient wingspan. It was Carpio who called Villaraza to tell him it was perhaps time to come together.

They struggled to build a steady client base as they sought to create a niche for a firm that they hoped would outlive them. While he was the managing partner of the firm, Carpio took pains to travel to Diliman to teach credit transactions and negotiable instruments, two subjects in law. As professor, he was known for his clarity of thinking and easily recruited to the firm the best and the brightest among his students.

To Lani Gomez Somera, one of Carpio’s former students who joined him in the firm and later in Malacañang, Carpio is a bit standoffish and is not inclined to smile. Her boss is even-tempered and the closest he got to losing his cool was when he “took off his glasses and put them on the table,” she recalls.

A known techie, the associate justice introduced his former firm to computers as early as the 1980s when these were not yet widely used. Believing that technology is both equalizing and liberating, he pushed for an e-library for the judiciary, the “first Web-based searchable electronic library in the Philippine government.”

“He is solution-oriented and likes to think out of the box. He is not predisposed to a linear way of thinking; he likes branching out,” Somera, who has since left the firm, adds. In discussions of cases, he would always push with his characteristic, “And?” In the aftermath of the SC ruling on people’s initiative, there was an abundance of loose talk about the firm being behind the Carpio-penned decision and supposed differences between Carpio and Villaraza over Executive Order 464, which prevented Cabinet officials from appearing before a congressional investigation. Despite seeming evidence to the contrary—given the resignation of Cruz as defense secretary and the firm’s other lawyers in government following suit—Villaraza declared that the firm remains supportive of the Arroyo administration.

If there is anything that the three partners have in common, it is political astuteness. How tactics, strategy, and deliberation will come into play bears close watching. For Carpio however, his place is secure for a good 13 more years—unless politicians in Congress try to impeach him. - Rappler.com/First published in Newsbreak in December 2006

Chay Hofileña is editor of Rappler's investigative and in-depth section, Newsbreak. Among Rappler’s senior founders and editors, she is also in charge of training. She obtained her graduate degree from Columbia University’s School of Journalism in New York. 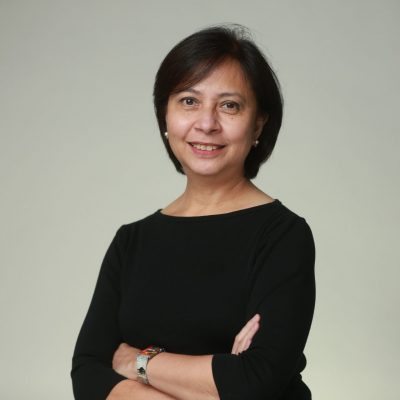