FALSE: ABS-CBN's franchise was not renewed because of pay-per-view service

Claim: A series of graphics on Facebook says that ABS-CBN Corporation's pay-per-view service is the reason Congress did not renew their franchise.

The 6 graphics, posted on the page Braii TV on Wednesday, May 6, said that because ABS-CBN used the air wave frequency that was provided by the government to earn money through their pay-per-view service "Kapamilya Box Office" or KBO, their franchise renewal was repeatedly denied since 2014.

The post said: "[ABS-CBN's] use of free air wave frequency to get gain resulted to the disapproval of their request for franchise renewal in 2014 during [former president Benigno Aquino III's] administration.... But because they had issues with the law even a known political ally such as an Aquino failed to approve their renewal."

They added, "They should have tried to correct their issues before asking for another renewal request on [President Rodrigo Duterte's] stricter admin, but they changed nothing in the contract." 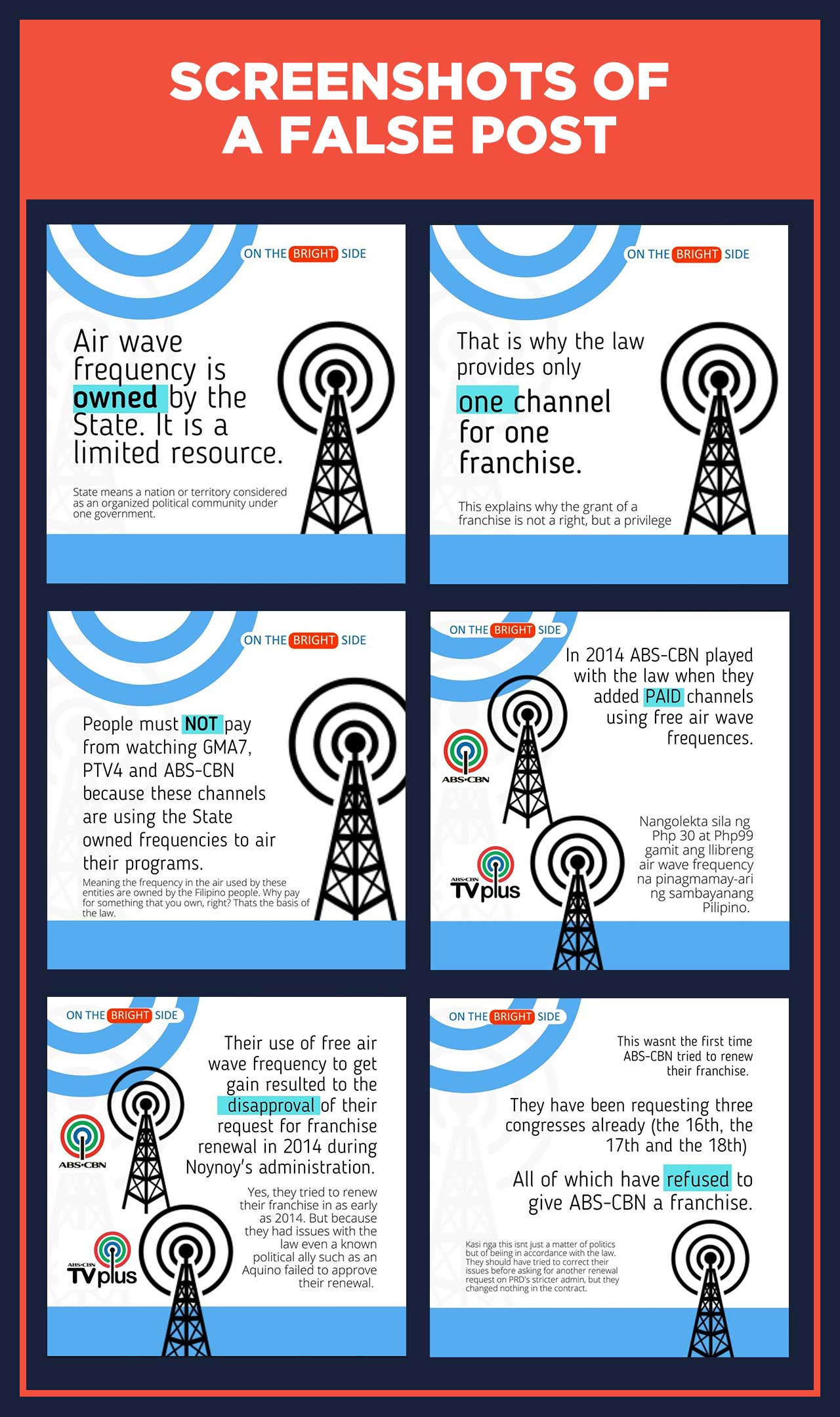 The post cited 6 sources as the basis for its claim.

This claim was sent to Rappler for fact checking by our readers.

Facts: Since March, the House of Representatives, from which franchise laws are supposed to originate, has held only one hearing on the ABS-CBN franchise. None of the congressmen present during the hearing cited ABS-CBN's pay-per-view service as the reason for the non-renewal of their franchise.

The pay-per-view service was one of Solicitor General Jose Calida's complaints against the network in his quo warranto petition, but this was addressed in a Senate hearing on February 24.

House Speaker Alan Peter Cayetano said on February 17 that there was no urgency to tackle the bills seeking to renew the network's franchise and accused them of unfair election coverage in 2010 and 2016.

Cayetano said in February that discussing the franchise renewal would be "tedious, contentious, and it [would threaten] to drain the momentum that has allowed the 18th Congress to accomplish so much" but did not expound on the network's violations that had to be discussed.

The House held their first hearing on the franchise on March 10, when Telecommunications Commissioner Gamaliel Cordoba said they would "most likely" grant ABS-CBN the provisional authority to operate beyond May 4.

On the other hand, the complaint that the KBO service is a violation of ABS-CBN's legislative franchise was one of the points in Calida's quo warranto petition against the network on February 10.

Both the campaign ads and the KBO service were addressed at a Senate hearing on February 24.

During the hearing, ABS-CBN CEO Carlo Katigbak apologized to Duterte and explained that all the national ads he paid for were aired, but they were unable to air all of the local ads because of Comelec restrictions on air time.

ABS-CBN clarified that about P4 million of the already-paid-for ads were returned, but the refund for the remaining P2.6 million was delayed and the President did not accept it.

Duterte has since accepted ABS-CBN's apology, but said that the franchise renewal was out of his hands.

On the KBO service, Cordoba echoed Justice Secretary Menardo Guevarra's position it was not necessarily a violation of ABS-CBN's franchise, as "commercial purposes" were allowed under it.

Section 1 of the franchise, Republic Act No. 7966, says that, "[...] ABS-CBN Broadcasting Corporation, hereunder referred to as the grantee, its successors or assigns, is hereby granted a franchise to construct, operate and maintain, for commercial purposes and in the public interest, television and radio broadcasting stations in and throughout the Philippines, through microwave, satellite or whatever means including the use of any new technologies in television and radio systems, with the corresponding technological auxiliaries or facilities, special broadcast and other broadcast distribution services and relay stations."

However, Cordoba said that ABS-CBN is subject to a P200 fine under Commonwealth Act No. 146 or the Public Service Act because KBO became available before the NTC was able to issue guidelines for it. According to Chapter IV, Section 21 of the law, public services that violate any regulations are subject to a fine of P200 per day for every day of their violation.

At the same Senate hearing, Senate President Pro-Tempore Ralph Recto said that if there were any penalties, the NTC should impose a fine on ABS-CBN instead of shutting it down.

When he asked Cordoba if ABS-CBN had any standing penalties with the NTC, Cordoba said, "None."

The sources that the claim cited included opinion pieces and reports on complaints about the network's franchise renewal, but did not include reports in the House saying that the pay-per-view service was the reason for their delay. – Vernise L Tantuco/Rappler.com