No end in sight to 'unrelenting' power outages in Palawan

PALAWAN, Philippines – It appears there's no end in sight to the almost daily rotational power outages Palawan has been experiencing for years.

While the mainland province's lone power distributor Palawan Electric Cooperative (Paleco) said it is seeking short- and long-term solutions that would end the power woes, its officials did not assure the consumers of an outage-free Palawan.

"We can't say the problem will be solved once and for all, because after solving this, another problem might crop up," Paleco board chairman Jeffrey Endriga said in a recent press conference.

This comes after the incensed Puerto Princesa City government took the issue to the court to hold Paleco officials liable for their "incompetence." The local government also demanded the officials to pay the former P1 million in damages.

The "unrelenting" power outages happen in Palawan "more than twice a day in different circuits (areas) at various intervals," noted the city government in its class suit filed with the Puerto Princesa Regional Trial Court on June 24.

The case has yet to be raffled off to the RTC branch that will handle it, according to City Legal Officer Arnel Pedrosa.

Meanwhile, scheduled partial blackouts in selected areas persist for up to 3 hours or more. These happen when Paleco needs to change its old electrical posts and power lines or move them due to road widening.

Scheduled partial blackouts likewise occur when Paleco needs to do vegetation clearing to prevent line faults, and also when IPPs need their engines to undergo maintenance and avoid breakdown.

The Palawan mainland grid has reportedly been experiencing power outages for more than a decade, with the longest lasting for 9 hours due to transferring of electric posts sometime in 2017.

The filing of the complaint against the electric cooperative was galvanized by a petition signed by over 2,000 dismayed residents. It came two years after city officials first announced the planned legal action in 2017.

"It affects the city government, the establishments, and the economy of Puerto Princesa in general. If we're going to add up what we're losing to unannounced brownouts, it will definitely reach millions upon millions," Puerto Princesa Mayor Lucilo Bayron told the media.

Bayron recalled that the frequent power outages started in 2009 and have recurred for 10 years now.

Residents of Puerto Princesa are not the only ones bearing the brunt of daily power interruptions, but also those in Palawan towns like Narra, which is located 92 kilometers south of the city. The hardest hit are microbusinesses with no readily available backup power generators needed to continue their operations.

"Regular supply of electricity is crucial to business operations. In our case, our water refilling machine doesn't work during blackouts, which we've frequently experienced," said Yvette Marie Tuibeo, water refilling station owner. "There were times many water containers needed to be filled but we [couldn't] accommodate them because there's no power."

"With nonstop power outages, our sales are going down. If the situation continues, we will really lose profit, especially we have to pay our workers. We also fear it would cause our machine to break down because we don't usually unplug it," she added.

For years, Paleco has been on the receiving end of criticisms. Even President Rodrigo Duterte threatened to take away the cooperative's franchise should it fail to shape up.

Paleco said it has already solved the undersupply problem that is due to the failure of its 3 IPPs to deliver their guaranteed dependable capacity or contracted power, which was previously the top cause of power outages in the mainland grid.

Now it's grappling with another challenge: trees that obstruct their distribution lines.

Nelson Lalas, Paleco acting general manager, prefers the trees to be cleared as these can topple distribution lines and cause power outages, especially when strong winds blow this rainy season.

"The problem: we're only authorized to trim just the branches," Lalas told the media. "If the certain branches are on top of the power lines…when the wind blows, they can fall on the lines and surely [power outages] will occur." 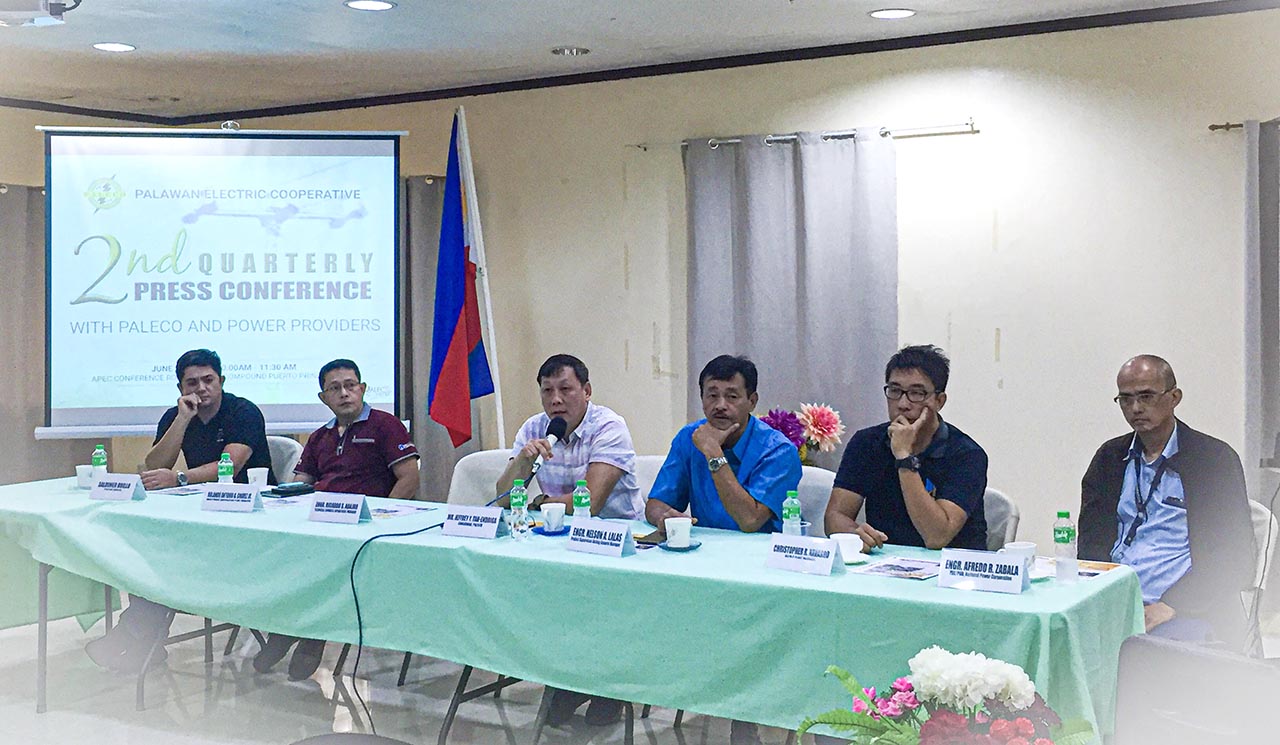 In instances when the trees pose harm to people's welfare and need to be cut down, Felizardo Cayatoc, chief of Puerto Princesa's Community Environment and Natural Resources Office, reminded Paleco to secure the necessary permits.

"If not, they (Paleco) will be liable under the Presidential Decree 705 (Forestry Reform Code) or other existing environmental laws," Cayatoc warned in a text message.

As "securing cutting permits takes time," Endriga offers a "somehow harsh solution" to this age-old vegetation issue. For him, consumers need to choose whether to sacrifice trees or enjoy uninterrupted power.

"The question here is, what's our priority? The service of diligently distributing power to each member-customer-owner, or the trees we don't want to give up because we want to preserve them?"

Endriga said electric cooperatives are pushing for the passage of the Anti-Obstruction of Power Lines Act to finally address this vegetation issue that causes power interruption. "We can't solve this in just overnight, what we need is the passage of this law," he added.

The proposed law will prohibit the planting of tall-growing plants – whether on public or private property – that may obstruct the power lines. It also provides guidelines on their removal.

Of course, the idea of felling trees doesn't sit well in Palawan where environmentalism runs high.

"These may be costly but in the long run they will prove to be the correct method," he said in a text message.

Palawan boasts of almost 700,000 hectares of forest, constituting 10% of the Philippines forest cover – the largest of all the provinces in the country, according to data from the Palawan Council for Sustainable Development (PCSD).

"Existing trees, especially in the city, are our only carbon sink measures against climate change, and value should be placed on them unsparingly," Chan stressed.

However, the island province dubbed as the country's last ecological frontier is losing an average of 8.8 hectares of forest a day or 3,200 hectares a year, partly due to "development," which includes electrification.

Madrono Cabrestante, PCSD's environmental management specialist, said development is inevitable but it has to be balanced with conservation.

"There is always a win-win solution. Let's not go towards extreme ecocentrism (environment-centered) or anthropocentrism (human-centered)," he said in an online interview.

"Can it (tree-cutting) be avoided, or can the electrical lines be diverted? Weigh the benefits and costs, both to society and the environment, of cutting the trees vis-a-vis the recipients of power."

In case clearing trees becomes unavoidable, he advised to "earth-ball the trees and plant elsewhere, or cut them [down] then replace them with new tree seedlings in places where these can grow unimpeded or where they can provide ecosystem services."

Lawyer Grizelda Mayo-Anda, executive director of Environmental Legal Assistance Center (ELAC), suggested in a separate online interview that the "better strategy is to bury the wires in an insulated pipeline like in other countries."

While long-term solutions are underway, Paleco has been installing insulated wires in vegetated areas since December last year to lessen the recurrence of power interruptions. Some outages in the past happened after wild animals like squirrels, bats, snakes, and even geckos went up on trees and found their way into the high-voltage power lines.

"Our lines are typical to rural and even private electric cooperatives. They are bare or uncoated wires. The challenge there is that they should be free from any debris or obstruction," Paleco engineer Ricardo Adajao explained.

"Naturally, whatever animal that may come in contact with those lines will get electrocuted…[then] it will cause the [line] to trip," added Adajao, Paleco's technical services department chief.

As to the installation of insulated wires, Paleco only prioritizes those in areas with thick vegetation and has so far finished 8 kilometers out of its nearly 4,000-kilometer distribution lines.

Paleco said it currently enjoys an oversupply of power. So far, its 3 IPPs – DMCI, PPGI, and Delta P – can provide around 66 megawatts (MW) or more than the current monthly peak demand of around 57 MW.

Still, not all is well.

Another reason for the occurrence of power outages is the breakdown from time to time of the IPPs' age-old engines due to excessive use.

Endriga, however, said it can't be a violation as he claimed it's not clearly stated in the contracts. He added that these contracts will be reviewed for possible inclusion of this provision.

"Now, the issue we're facing is the reliability [of power engines]. The contract, however, is silent if this scenario constitutes a violation [that would earn them penalties]," he said.

What's only defined in the supply agreement, Endriga said, is the imposition of penalties for failure on the part of the IPP to deliver its contracted power. In 2017, Paleco had fined repeating violator DMCI around P10 million for the non-full delivery of its 25-MW contracted power.

Anda, meanwhile, renewed her Save Palawan Movement group's call for the revocation, particularly of DMCI's contract.

"Under the Paleco's PSA (power supply agreement) with DMCI, the repeated power outages in 2015 due to DMCI's unreliable engines and other violations should have been grounds for the revocation of such PSA," she said. "It is negligence on the part of Paleco." – Rappler.com