Bots, Assange, an alliance: Has Russian propaganda infiltrated the Philippines?

From September 29 to October 9, @Ivan226622 – like accounts @rickrick888 and @bobbit2266 – tweeted articles created by Russia Today (RT) and Sputnik. Both RT and Sputnik are Russian government-funded news sites that serve to spread Russian propaganda.

The 3 accounts were “part of an online army of robot profiles, who, armed with gasoline canisters brimming with fake news, stalk social media and fan the flames of debate as ordered by their generals,” said Spain's widest read newspaper and second most read online news site.

“At the beginning of October, this army went to work on the issue of Catalan independence. Evidence shows a total of 87% of the 65 accounts who most shared RT and Sputnik content were automated,” El Pais said.

“Those accounts helped ensure that Russian news outlets were the fourth most influential in the digital conversation about Catalonia.”

By November, the Spanish government said they had evidence that Russian-based groups used Twitter, Facebook, and other sites to back the Catalonia referendum, in an attempt to destabilize Spain.

But it seems that @Ivan226622, an account used for Russian propaganda, has since changed gears: it is now tweeting exclusively about the Philippines.

PROPAGANDA ACCOUNT. @ivan226622 is one of many fake accounts that have been used for Russian propaganda.

In just one week, from February 13 to 20, Ivan tweeted 1,518 times. Most are retweets of news reports from the Philippine Daily Inquirer.

Over that period, his tweets reached 43,337 accounts, and had 1.9 million impressions, according to TweetReach, a social media analytics tool that measures reach and engagement.

The account’s pinned tweet since May 11, 2017 is also telling: a YouTube video on how trust in the press has dropped over time.

Prager studied at the Harriman Institute at Columbia University, which is devoted to Russian studies. He also taught Russian history at Brooklyn University.

It is not the first time that questionable tweets raised concerns about possible Russian presence in the Philippine online space.

About 11,000 kilometers from Manila, on October 12, 2017, a tweet came out from the Ecuador embassy in London about ongoing affairs in the Philippines.

Wikileaks founder Julian Assange, who resides at the embassy by right of asylum, retweeted a post by Rappler on an article about its ownership. The article reported on how Philippine President Rodrigo Duterte falsely claimed that Rappler is funded by the Central Intelligence Agency (CIA) of the United States.

“Contrary to Duterte’s claims, Rappler is 100% Filipino-owned, and the CIA is not one of its funders,” said the Rappler tweet.

Assange then added a comment in his retweet: “Is Rappler right?” he asked.

The tweet succeeded in casting doubt on Rappler’s ownership. Twitter users replied to Assange asking for clarifications, although he replied to none of them.

“What do you mean?” asked Malou Tiquia, a political strategist.

Three months after Assange's tweet, on January 15, 2018 the Securities and Exchange Commission (SEC) revoked Rappler’s license to operate, for allegedly being owned and controlled by a foreign entity – a claim Rappler strongly denies.

Why was Assange even tweeting about a Philippine issue in the first place?

Ben Nimmo of the Atlantic Council, who focuses on social media and digital forensic research, offered a possible explanation.

“The exact relationship between Assange and the Kremlin is murky, but he’s certainly been extremely useful for the Russian government,” he told Rappler. 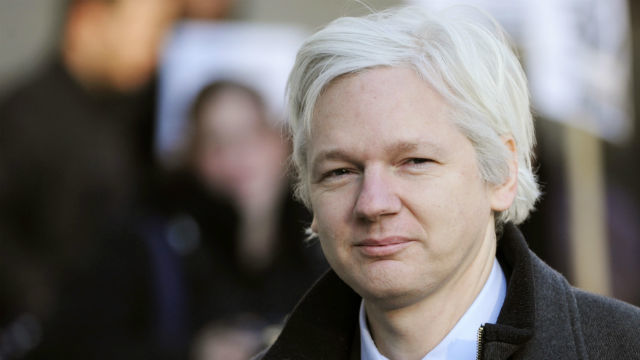 CONTROVERSIAL FIGURE. WikiLeaks founder has been a useful tool for the Russian government.

“We know that he has connections with the Russian propaganda machine: he used to have a show on RT and has been a speaker (via video) at Sputnik events. Russian intelligence channeled their hacked emails through Wikileaks in 2016.”

While Nimmo conceded that “the exact mechanism isn’t clear” he added that at “the very least, Wikileaks and Assange have been very useful tools for Russian influence operations.”

Assange's other tweets lend credence to his ties with the Kremlin.

In December 2017, Ecuadorian President Lenin Moreno warned Assange not to interfere in Catalonia's separatist crisis, after Assange angered Madrid by using Twitter to pump out messages of support for Catalonia's independence drive.

Spanish Foreign Minister Alfonso Dastis has said there were signs that Assange was "trying to interfere and manipulate" amid the Catalan crisis after the outspoken Australian earlier met with a prominent Catalan pro-independence figure.

Most recently, on February 19, Assange defended the Internet Research Agency, considered a "troll farm" connected to the Russian government, that was indicted by the United States for interfering with their 2016 presidential elections.

The indictment revealed a detailed, disturbing Russian operation launched in 2014, which aimed to sow social division in the US and influence American politics.

In one of a series of tweets, Assange slammed the allegations that the IRA intervened in American politics.

“The US has 320 million people with a trillion dollar media and cultural sector that employs over a million people. I do not assess that it is possible whatsoever to divide America by trying to ‘heighten the differences’ with a hundred trolls,” he wrote.

Aside from curious tweets about the Philippines from Assange and the Ivan account, the Duterte administration itself has announced a communications partnership with Russia.

The Presidential Communications Operations Office (PCOO) and the Russian Ministry of Telecom and Mass Communications said they would cooperate in the field of state information dissemination, including media training of PCOO staffers in Russia.

The Philippines and Russia, in November 2016, signed 8 bilateral agreements, including a Memorandum of Understanding on Cooperation in Mass Communications.

This, despite accusations against Russia of producing fake social media accounts. Rappler CEO and executive editor Maria Ressa had warned against getting information dissemination training from Russia, which could be divisive and dangerous for the nation.

Within 3 months of taking office, President Duterte announced he would pivot the Philippines away from the United States toward China and Russia.

Duterte himself has been vocal about his admiration for Russian President Vladimir Putin, whom he called his "idol" and "hero."The two first met in November 2016, where Duterte told Putin he was tired of "Western nations bullying the small nations" and called the United States hypocritical.

Putin personally congratulated Duterte for his "triumph" in the presidential election, and assured the Filipino leader that Russia looked forward to warmer ties with the Philippines.

Six months later, Duterte went to Russia on an official visit, punctuating an ongoing shift in Philippine foreign policy toward Russia and China.

To get a better sense of the Kremlin's own sentiments towards Duterte, Rappler reviewed articles on the Philippines published by Russian-propaganda arm RT.

RT's opinon-editorials (op-eds) on Duterte in September and December 2017 both highlighted and praised his anti-American stance, and slammed "how the West invents or exaggerates ‘human rights’ and ‘corruption’ matters to ostracize, even to overthrow legitimate governments."

But it went to work specifically on one specific occasion: the Marawi siege, wherein Islamic State forces – which aimed to establish a caliphate in Southern Philippines – battled government troops for 5 months.

Between May 25 and July 16, RT published 4 op-eds on Marawi. One described Duterte as being "in the exact same situation, very similar situation to Bashar Assad in Syria." Another noticed "the parallels between the situation in the Philippines with that of Syria" and questioned the intentions of US assistance in the Marawi conflict.

"Clearly, President Rodrigo Duterte – like Syrian President Assad – is facing the ultimate challenge to his presidency. And considering his past pledge to realign Philippine foreign policy away from Washington and towards Moscow and Beijing, the question is an obvious one: Are those US Marines and Special Forces in the Philippines, which, as in Syria, appeared without invitation, there to help the Duterte government, or do they have other ideas in mind, which will only become painfully apparent when it’s too late for the Philippines leader?" it said.

Russia has keenly backed and armed Assad in the bloody Syrian war, and challenged US assistance of Syrian rebels on the ground.

The worrisome activities in the Philippines come as the US, led by special counsel Robert Mueller, indicted Russians for “information warfare against the United States of America.”

The indictment showed how 3 Russian organizations – including the IRA – and 13 Russians mounted a secret campaign to garner support for then presidential candidate Donald Trump.

The groups “had a strategic goal to sow discord in the U.S. political system, including the 2016 U.S. presidential election,” said the indictment, by creating social media groups posing as Americans, used to spread propaganda.

The campaign included creating divisive and inflammatory social media posts that supported radical groups, SEO strategies to influence algorithms, the use of data analytics to determine what content was the most successful, and even sending private social media messages to Americans.

The indictment said that by 2016, many of the social media groups controlled by the Russians “had grown to hundreds of thousands of online followers,” with some of their tweets even being shared by members of the Trump campaign.

Aside from online activity, trolling, and the use of sock puppets, the Russians also organized rallies in the United States by communicating with Trump supporters using false identities.

After Trump’s victory, and the IRA’s success in helping get him to power, they then shifted to another goal: to further divide the United States. Operators started organizing rallies in New York both for and against Trump.

Aside from the US and Spain, the Washington Post reported that Russia had meddled in the elections of various other countries for years, including polls in France, Germany, Norway, the Netherlands, and the Brexit vote in the United Kingdom, to name a few.

Twitter, earlier in January, found and shuttered an additional 1,062 accounts associated with the IRA.

The techniques are eerily familiar and close to home.

The Philippines too has experienced a similar trend and influx of fake accounts and the creation of political advocacy Facebook pages – aimed at spreading propaganda and creating a social movement that is widening the cracks in Philippine society by exploiting economic, regional, and political divides.

The divisive online conversations were most evident in the 2016 elections, and have continued and intensified during Duterte’s presidency – much like the behavior in the US, as detailed in the Mueller indictment.

Is Russia involved in the propaganda campaign in the Philippines?

Tweets about the Philippines from accounts previously used by Russia and from Kremlin-linked Assange, plus government’s open fondness for Moscow suggest disturbing possibilities. – Rappler.com