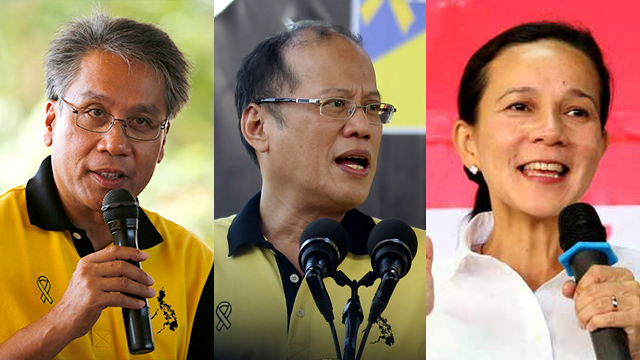 Liberal Party (LP) standard-bearer Manuel Roxas II grabbed headlines on Friday, May 6, when, in a hastily called press conference, he invited presidential rival Senator Grace Poe to “talk” for “unity, our country, and our future.”

It was a call prompted by “uncertainty and the specter of a dictatorship are looming over our country once again.” Roxas was referring to the surging popularity of Davao Mayor Rodrigo Duterte, who leads presidential preference polls held less than a week before the elections.

Poe, who was campaigning in Laguna when Roxas made the public invite, said talk was fine but “if they want to talk about my withdrawal, I will not back down.”

It was reminiscent of events in August 2015, back when Roxas was still without a running mate and Poe was still hush-hush about her plans to run for president. In a television interview then, Roxas revealed he had already asked Poe to be his running mate – an invite Poe said should have been made in private.

Shortly after Roxas’ announcement last Friday, news broke that LP chairman President Benigno Aquino III had called on other presidential candidates to unite, in hopes of defeating a Duterte presidency.

On social media, the response to Roxas’ call and Poe’s response was a mixed bag. Roxas’ supporters accused Poe of being selfish and unwilling to put the country before her own plans. Poe’s supporters, meanwhile, cried foul over the “trap” that Roxas and his campaign had set for Poe.

The debate continues to rage online as the nation waits to vote on Monday.

Why make it public?

Notice how public Roxas’ appeal to Poe was. As one source from the Aquino camp put it, these things are usually crafted in secret and usually through emissaries.

Aquino apparently did this.

Both he and Poe confirmed that invitations were sent out for a “dialogue.” The neophyte senator, who used to lead presidential preference surveys, was supposedly open but non-committal to the invite, according to a source privy to the exchange.

This apparently piqued Poe, who's running second to Duterte along with Roxas in preference polls, according to the same source. Thus her curt reply to Roxas.

Friday's events were such a throwback.

After all, as early as 2015, Aquino attempted to forge an alliance between Poe (who then had an overwhelming lead in surveys) and Roxas, his 2010 running mate and long-assumed 2016 standard-bearer of the ruling party.

Those meetings, we all know now, failed. And that's why the outgoing president is back to square one on the eve of the May 9 elections. – Rappler.com