#LeniLeaks: Speculations based on fragmented emails 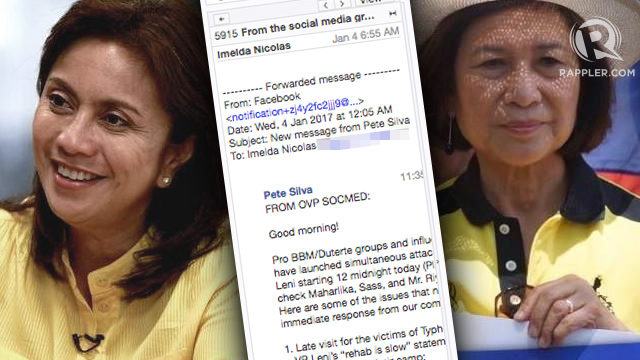 INCRIMINATING EMAILS? The internet explodes into a frenzy over supposed leaked emails from the Office of the Vice President containing negative messages about President Rodrigo Duterte.

The buzz started among bloggers known to be pro-Duterte, and gained traction when no less than the Palace communications secretary picked it up for his podcast: Vice President Leni Robredo is supposedly conniving with United States-based groups to oust the President.

The basis of their allegation: parts of an email thread on Yahoo! Groups that one blogger was alerted about, and which another blogger was able to preserve through an archiving service. (The original thread could no longer be accessed online.) Neither Robredo nor any of her staff was part of the thread.

Robredo, therefore, should be charged with sedition for plotting against President Rodrigo Duterte, an anonymous blogger suggested. She's even liable for graft, the blogger added, for supposedly using government money to do so.

So how solid is this #LeniLeaks, as they call it?

It doesn’t hold water, if based only on the “leaked” information.

Based on the screen shots of the archives taken by blogger 2:

Based on these, they speculated: Lewis supported Duterte’s rival Mar Roxas and running mate Robredo in the 2016 election, and had publicly called for the President’s resignation after that. There was a message, supposedly from a unit from the OVP. Robredo was in the US during the holidays, according to news reports. Therefore, they said, she probably met with Lewis to discuss the plot to unseat Duterte.

Loopholes in the ‘leak’

1. There’s a call for Duterte’s resignation, but not a move for his ouster. The email thread shows Lewis saying: “The only way to fight this evil plot to unseat VP is to ask Duterte to resign. After all, he promised to resign in six months if he has not solved the drug epidemic in the Philippines. He asked for an extension of another six months. Extension denied! Join Duterte Resign Movement.”

In an email to Rappler on Monday, January 9, Lewis confirmed that there is indeed a Resign Duterte Movement. It is “based on President Duterte’s own words that he would resign if drugs are still rampant 6 months after his inauguration,” she said.

She did not categorically confirm that the retrieved messages are authentic (the email thread was posted on a public Yahoo! Groups page), but said there is a public site for the Global Filipino Diaspora Council, and plots, if ever there’s one, are not discussed in public sites. She said there is no plot to oust the President.

Legal and policy expert Tony La Viña makes the distinction: “Sedition is a call for an illegal act. There was no illegal act being called. To call for the President’s resignation is a free political exercise.”

(This alleged plot to oust Duterte, I'm definitely not involved in that. I believe it won't be good for our country if we launch an oust-the-President movement.)

2. Robredo and Lewis deny meeting in the US over the holidays. Lewis, who is based in New York, said in an email to Rappler, “I did not know she was in the US until she had already left.” Robredo was with her kids in Pennsylvania for a clan reunion.

In a chance interview on Monday, January 9, Robredo said the last time she spoke to Lewis was during her vice presidential campaign in the first half of 2016. Also a Bicolana, Lewis supported Leni’s congressional campaign in Camarines Sur in 2013.

3. So far, there is no connection established between the Pete Silva who forwarded the message from the supposed OVP social media group and Robredo’s office or Robredo’s campaign.

If ever the list of media strategies was authentic, La Viña said, “I don't see anything there that is outside normal. Every politician will have his own communications strategy.” 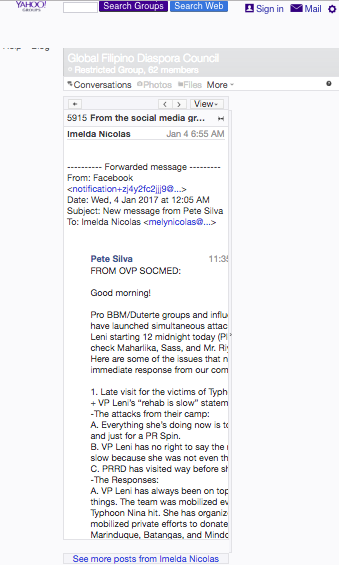 The controversial post which supposedly came from the Office of the Vice President shows a detailed communication plan to counter the attacks against Robredo.

La Viña added: “This is a product of a wild and active imagination. It’s adding a plus plus when there's nothing there. [if somebody files a case], it would not even pass the secretary of justice.”

True enough, on Monday, the justice secretary – President Duterte’s appointee – said the speculations are not worth probing. At least 3 Cabinet members also said they had more important matters to take up in Malacañang than this "destabilization" plot that Secretary Andanar wanted on the agenda. – Lian Buan/Rappler.com