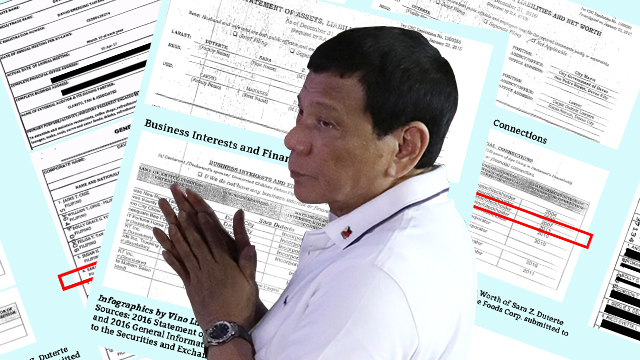 MANILA, Philippines – Apart from father, daughter, and eldest son, 16 people who are relatives by blood or affinity of the Dutertes have worked or remain in government posts.

They come from three major lineages: Duterte, Zimmerman, and Carpio.

Included are a few who were no longer holding public office as of the 2017 SALN submissions of the President, Sara, and Paolo.

In all, 7 Dutertes, 3 Zimmermans, and 6 Carpios complete the picture.

The list varies, though, with the inconsistent declarations that Duterte, Sara, and Paolo had made in their respective SALNs about what positions in government these relatives have occupied, during the same period of time. 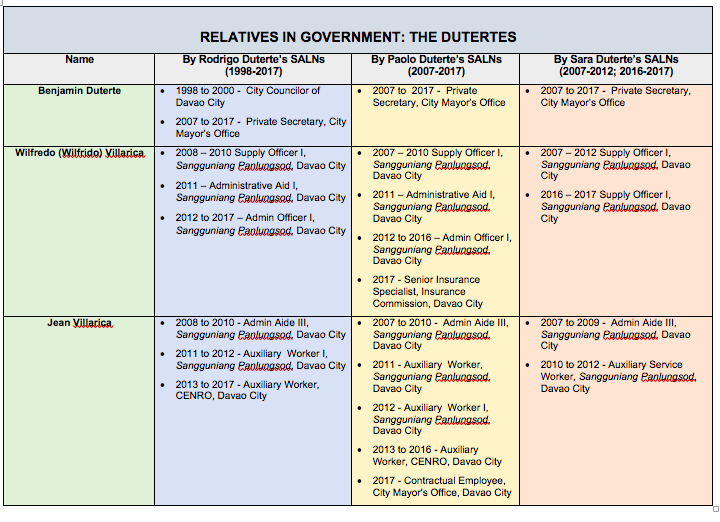 In their 2007 SALNs, Sara and Paolo listed Wilfredo Villarica, sometimes listed as Wilfrido, as one of their relatives in government. That year, Sara and Paolo declared Villarica to be a Supply Officer I holding office at the Sangguniang Panlungsod of Davao City. He is Sara’s and Paolo’s cousin – and Duterte’s nephew.

But Duterte’s 2007 SALN, did not include Villarica. At the time, Duterte was Davao City mayor.

By 2017, the President, Sara, and Paolo all listed Villarica in their respective SALNs, albeit with different designations.

In 2017, Jean Villarica was listed by Duterte to be an Auxiliary Worker I at CENRO in Davao City and by Paolo as a contractual employee at the City Mayor’s Office of Davao. Sara did not list Jean in her 2016 and 2017 SALNs.

But it is Paolo who appears to be the most forgetful or negligent; in his 2016 SALN, he did not even name his kid sister Mayor Sara, who had him as her running mate in the 2016 elections, as among his relatives in government. 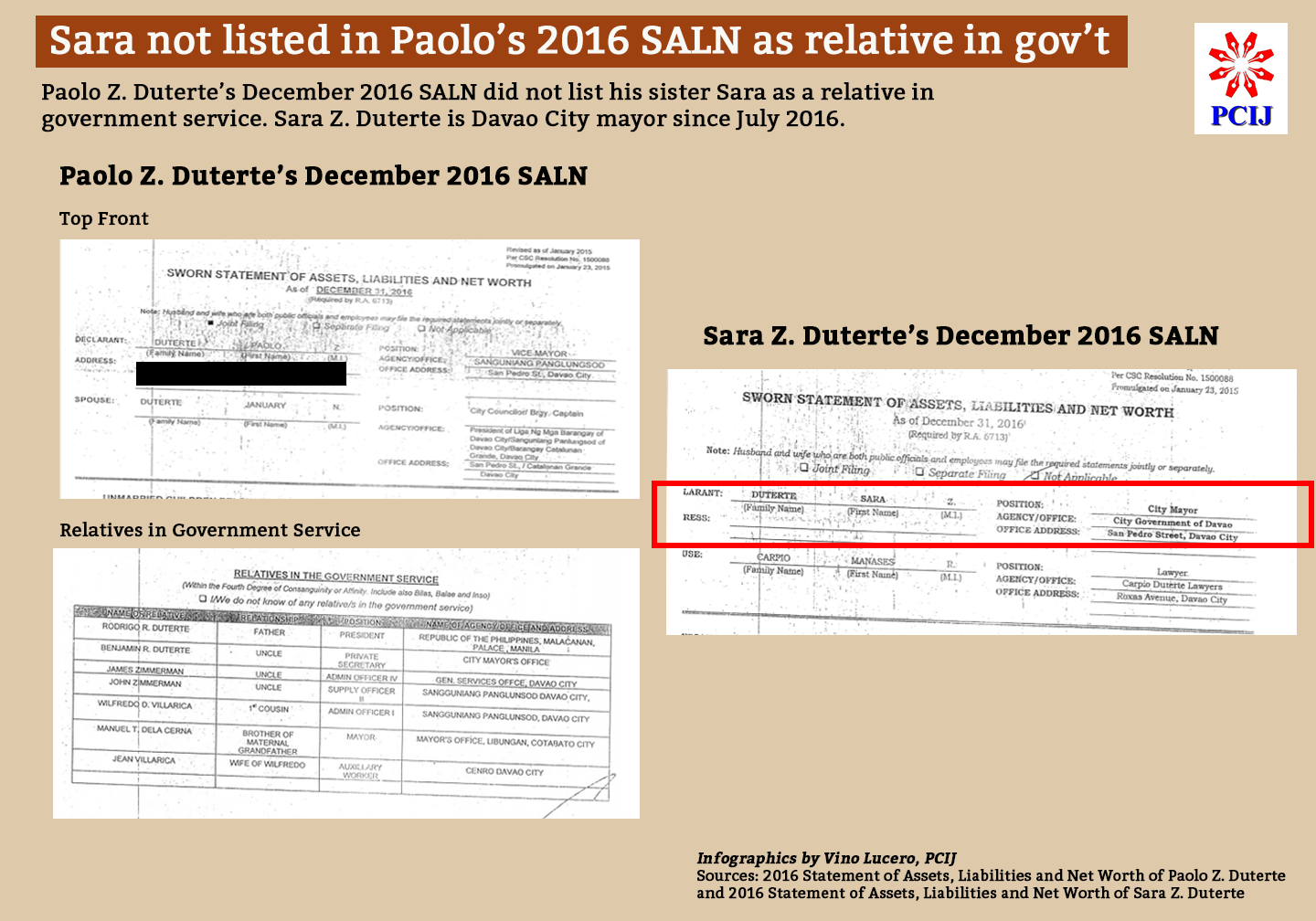 Another Duterte, the President’s brother Benjamin, is on the list of Duterte relatives in government. Benjamin was a councilor of Davao City from 1998 to 2001. But from an elective position, he shifted to an appointive post as “Private Secretary at the City Mayor’s Office” from 2007 to 2017 under both Rodrigo and Sara serving as mayor.

January Duterte, wife of Paolo, is also in public office. Currently, she is serving her second term as barangay captain of Catalunan Grande and Councilor of the Sangguniang Panlungsod of Davao City – a post held previously by Paolo. 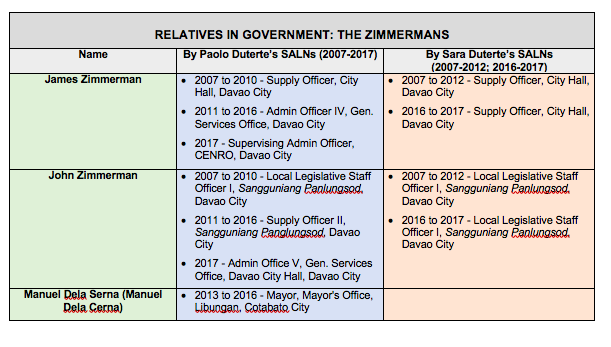 From 2007 to the present, James and John Zimmerman, both brothers of Duterte’s estranged spouse Elizabeth Zimmerman, have held and still hold positions at the Davao City Hall and the Sangguniang Panlungsod of Davao City.

In 2016, Paolo listed John as a Supply Officer II, while Sara listed him as Local Legislative Staff Officer I. At the very least, Paolo and Sara agreed that both posts were at the Sangguniang Panlungsod of Davao City.

By the following year, Paolo and Sara were apparently still not comparing notes. Paolo listed uncle John Zimmerman as Admin Officer V at the General Services Office in Davao City Hall; Sara had John as Local Legislative Staff Officer I at the Sangguniang Panlungsod of Davao City.

Another Zimmerman in the Dutertes’ roster of relatives in government is Manuel Dela Serna (sometimes listed as “Dela Cerna”). He is Elizabeth Zimmerman’s uncle; Paolo also listed Dela Serna in his SALN as the brother of his maternal grandfather. Dela Cerna was Mayor of Libungan, Cotabato City from 2013 to 2016. 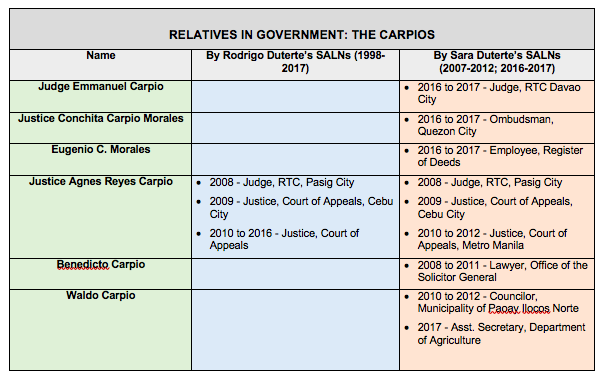 By her marriage to Mans Carpio in October 2008, Sara introduced a third lineage to the Dutertes’ web of relatives in government. At least 6 Carpios make up about half the 13 total Duterte kin by blood or affinity holding public positions.

Judge Manolo, however, was not listed in the previous SALNs of Sara even though he had been part of the bench even in years prior.  In 2011, the judge and then Davao City Mayor and niece-in-law Sara Duterte had an argument over an order the former had issued for the demolition of an illegal settlement in Barangay Tomas Monteverde Sr. in Agdao, Davao City.

The two reconciled in 2014. In 2015, the Supreme Court designated Judge Manolo as the new Executive Judge of the Davao City RTC, after the retirement of Judge Pelagio Paguican. Among those who signed the Supreme Court Administrative Order on Manolo’s appointment was Associate Justice Antonio Carpio, a cousin of Mans’s father but who is not required to be among Sara’s list of relatives in government.

Sara’s mother-in-law, Agnes Reyes-Carpio, was also a member of the bench. By the time Sara and Mans were married in 2008, Reyes-Carpio was already an RTC judge in Pasig City. In 2009, she became Court of Appeals Justice in Cebu City, and then in Manila from 2010 to December 2016, when she retired. From 2008 to 2012, daughter-in-law Sara listed Justice Reyes-Carpio in her SALN, but not in the one she filed in 2016.

Another brother of Mans, Waldo Carpio, served as Councilor in the Municipality of Paoay, Ilocos Norte from 2010 to 2012.

President Duterte appointed Waldo assistant secretary of the Department of Agriculture in September 2017, and promoted him to undersecretary “for special concerns” in November 2018.

Waldo had also served as consultant for “Community Relations and Services” at the Philippine Amusement and Gaming Corporation (PAGCOR) from November 2016 to August 2017. The President was a godfather at Waldo’s wedding in September 2016. – with infographics by Vino Lucero, R-Jay Sale, and Arnel Rival, PCIJ, April 2018