MANILA, Philippines - The visitors got more out of this game than we did. The Philippines and Maldives both came to the game knowing that in 5 days they would meet tough opponents in World Cup qualifiers. The Azkals take on Uzbekistan while the Maldivians travel to Shenyang to face the 84th ranked team in the world, China. Both sides needed a tough test to keep them sharp. Only one team got one.

Maldives played compact and hardly tested our 3-man backline and goalkeeper. Apart from a cross he had to corral inches from the goal line and one Neuer-esque foray out to spear away a loose ball, Neil had a quiet day in the office.

The visitors were badly in need of ideas and sorely missed the talismanic Ali Ashfaq, who Simon McMenemy, current Loyola and erstwhile Azkals coach, said was the “the Phil Younghusband of Maldives.” According to Simon, Ashfaq was the top scorer of the Malaysian second tier, then when he played in the top flight, became the league's second-best scorer there. Ashfaq will join his side in China for Tuesday's game.

Maldives were able to stymie the Philippines for an entire half before conceding two scores in the second. This will be good practice for Tuesday for them, where the Chinese will be needing goals bad. They routed Bhutan but were held to a goalless draw by Hong Kong. China want to win big to pip Qatar to the Group C championship. Goal difference will be vital if they finish second.

As for the Philippines? Well it was a bit of a training exercise for much of the contest. Maldives were a perfect opponent to play 3 at the back against. Who needs 4 defenders when one or two of them will be defending air most of the time? The team was not terribly tested in defense, especially since Maldives didn't seem particularly fleet-footed.

Ideally we could have benefited more from having a more enterprising team come over. But getting friendly dates at home is a difficult, delicate dance sometimes with other associations. This is probably the best we could have done. What the game amounted to in effect was a feel-good win for Metro Manila-based fans, who hadn't seen the NT play since December.

The shuffling of the back 3 was all squid tactics by Thomas Dooley. The Azkals began with Jerry Lucena at centerback, Amani Aguinaldo at right back, and Daisuke Sato at left back. Then sometime in the first half Lucena and Aguinaldo swap places. Then in the second half Sato was withdrawn, Kevin Ingreso slides in to replace him. The game seemed to finish with Dennis Villanueva at right back.

It was almost like a pick-up game the way players were just flitting around back there. I had never seen anything like it in an international game. Usually coaches are loathe to make changes in defense.

But there was a method and a reason to Dooley's “madness.” I was told before the game that Uzbekistan had a scout at the game. Then it all made sense. Dooley didn't want to show his hand. He wanted the Uzbeks to know as little about the team as possible going into Tuesday.

Dennis Villanueva is not a right back and neither is Kevin Ingreso a left back, to my knowledge. Dooley deployed them there not only to give them some international experience, but also to throw the Uzbeks off our scent, as it were. And even though Juani Guirado played nary a minute on Thursday, I suspect he could be there in front of Neil Etheridge on Tuesday. His veteran smarts could be invaluable against a very powerful team.

Guirado was originally a starter in the printout of the start list that was handed to me before the game. Then as I settled into my commentary position, his name was suddenly scratched out and Aguinaldo's was there in its place.

Manny Ott and Martin Steuble, two outstanding players who work well together since they both play in Ceres, also never got off the bench. I expect one or both to get on the pitch on Tuesday.

There were some encouraging performances from some of the Filipino players. Stephan Schrock told me after the game that he was still jetlagged and only slept two hours the night before. And yet Dooley got ninety quality minutes out of him. The Greuther Furth man was a royal pest on the right flank with his trickery and blinding speed. Even when not fully rested, Schrocky is often our best player.

McMenemy praised Ingreso after the game. The kid was very composed both in central midfield and defense. Paolo Bugas and OJ Porteria were second-half subs and both did well. Porteria even had a shot at goal. Bugas tracked back on D, produced one dangerous cross from the left, and released Reichelt with a long forward pass which Reichelt centered to Patiño, who finished weakly. It's great to see Bugas perform this well after an uneven display in the SEA Games.

The atmosphere in Rizal Memorial was wanting. I watched the UFL Cup final last Friday between Ceres and Kaya, and the atmosphere was better there than in this game. I think there were slightly more fans in the grandstand for the cup final, but there were a few hundred in the bleachers on Thursday. The Cup final also had organized cheering from both protagonists, which helped amp up the testosterone levels. Plus it was also a more open game with more at stake. 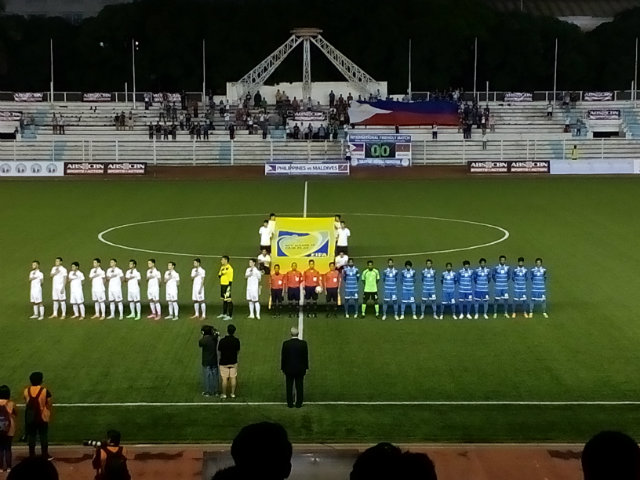 The atmosphere at Rizal Memoriall left something to be desired.

Considering it was the first Metro Manila game for the Azkals since December of 2014, the turnout against Maldives was disappointing. The match was not set until recently, so perhaps that explains the sparse crowds a bit.

But I think the organizers should try to get creative and shake things up. I think a P40 or P50 end-bleachers ticket is a good idea for friendlies such as this. That is a good budget option for cash-strapped fans, which, to be honest, are many. P125 is still steep for a lot of Filipinos, especially on a weeknight when even getting to the match can be a pain.

Perhaps the Azkals can follow the lead of the UFL and make the matches, at least the friendlies, free for students? Or maybe tie up with brands that give free tickets for merchandise purchased? I don't know, I really think something must be done.

And in the lead up to this game and the Uzbekistan match, I encountered two questions that kept on popping up: 1) is there an Internet livestream for the game? And 2) is there bus transport for Tuesday? I hope these two matters can be addressed soon for the benefit of fans both here and abroad for games going forward.

That was one bizarre own goal by Mohamed Samdhooh. I totally made a mess of the commentary on the goal. It was the start of the second half and I think I was still confused about who was playing in which direction. I recall a blue shirt score a picture – perfect header goal. Then fans celebrating. Then the first thought that came to my head was “wow, so many Maldives fans in the house.” Then I realized what had happened. An own goal of the most egregious kind.

Samdhooh totally misjudged the ball. Either he was heading it back from whence it came or was trying to steer it wide of the post. He was catastrophically off no matter which purpose he had in mind. Own goals happen but this was one of the ugliest ones I've seen in a while.

Quote of the day from goalscorer Jerry Lucena, who now has two international goals, both against Maldives. “They should build me a house there. I'm like their top scorer.” – Rappler.com