MANILA, Philippines – “You can’t talk peace and have a gun.”

Magalona graced “1 Goal for Peace,” the ceremonial kick-off of the National Peace Consciousness Month this September.

This year’s peace month commenced on Sunday, September 1, with a football clinic held at the Emperador Stadium, McKinley Hill in Taguig.

The month-long celebration is spearheaded by the Office of the Presidential Adviser on the Peace Process (OPAPP).

“My dad himself was an advocate of peace,” said the younger Magalona after singing the ’90s hit song upholding unity amid “different voices, different choices.”

Magalona's participation in this event continues his youth-oriented advocacy.

He sang to a crowd of around 200 Muslim and Christian children from urban poor communities in Metro Manila, joined by children of OPAPP peace workers.

He later led the balloon-carrying kids to the middle of the field where they formed a giant peace sign and recited a peace pledge, expressing their commitment to bring about a peaceful nation.

Later, players and coaches from Azkals and Teen Azkals joined the kids to teach them the basics of football, as well as the values of teamwork, tolerance, honesty, and respect through this sport. 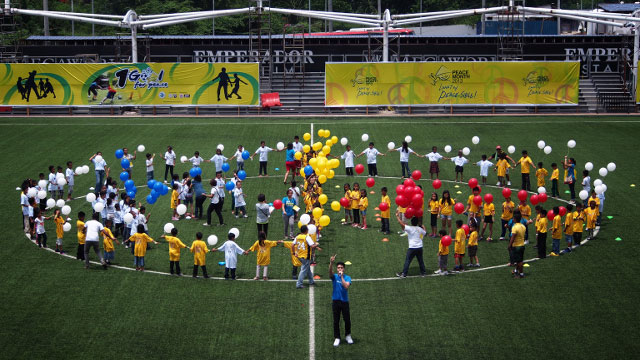 (In football, you can see that if people work together, anything can be done, even things that seem impossible.)

“If we nurture the idea of peace amongst children, especially at the grassroots level, then we are giving them the chance to experience a life of peace - one without violence and conflicts,” he said.

OPAPP has been leading the annual celebration of the National Peace Consciousness Month since 2004 by virtue of Proclamation No. 675 issued on the same year. - Rappler.com