The kids are alright: Meet the U22 'Olympic' Azkals

Most kids under the age of twenty-two are out partying on a Friday night. But not Jim Fraser's bunch.

Last Friday the Philippine Men's National U22 football team squared off against Stallion in their third tuneup match of the week, their final one before leaving for Bangkok on Sunday, March 22.

The squad will play the group hosts Thailand, plus Korea DPR, and Cambodia in Group G of the qualifying phase of the 2016 Asian Football Confederation U23 championship. Next year's tournament is in itself a qualifier for the 2016 Rio Summer Olympic Games football competition. Jim Fraser, their Australian coach, is optimistic that the boys will fight hard.

“We've improved out of sight in the past few weeks,” says Fraser, an Australian goalkeeping legend who minded the nets for the Socceroos 1974 World Cup qualifying campaign.

But before we get to the composition of this team, it's important to note those who are conspicuous in their absence.

Amani Aguinaldo, Daisuke Sato, OJ Porteria, Kenshiro Daniels, and Dennis Villanueva are all eligible for this team, but are not part of it because they are with the senior Azkals. The camp before the Bahrain friendly on March 30 clashes with the U22 qualifiers. These players have many skills, but bilocation isn't one of them.

At first glance, it may seem like a strange decision to leave out these players, who would surely help the U22 cause in Thailand. But management, and the PFF it seems, has made the call to keep those guys in the senior squad and instead give more youngsters badly-needed game time in Thailand.

Thomas Dooley says he wants to prepare for the World Cup qualifiers in June better than he did for last year's Suzuki Cup. He is also installing a new system, and wants all hands on board when he does so. Taking out Aguinaldo and company might well scupper that plan.

This could mean that this U22 team in theory gets weaker, but it could also strengthen the squad further down the road by granting international experience to future senior Azkals.

It's a tough call, but ultimately I agree with it, especially since there is another youth-vs-senior scheduling conflict further down the road. The SEA Games will run during FIFA World Cup qualifying dates in June. This U22 team will form the nucleus of that U23 SEA Games roster, with a few reinforcements, like maybe Jinggoy Valmayor, who can still play U23 ball but are overage for a U22 tournament.

It's probably best to separate the teams as early as now.

There's another bunch of players who might be expected to be here but aren't. Most of the core of FEU's back-to-back UAAP championship squad are nowhere to be found on the roster. No Paolo Bugas, Jhan Jhan Melliza, Val Jurao, Noli Chavez, or Eric Giganto, the UAAP's top scorer in season 77.

My quick call to FEU's athletic director, Mark Molina, dismisses any notion that the school did not release them. Molina says FEU was not holding any of the Tams back, and that they were free to tryout.

There are no members of the DLSU squad either. Jojo Borromeo, Nicko Villacin, and Sabin Bustamante were at the game, though, suiting up for Stallion.

I was informed by the team that the FEU players listed two paragraphs above simply failed to show up for some or all of the tryouts.

But thankfully, there is one huge exception: Arnel “Nano” Amita is very much in the squad. And he made his presence felt in the Stallion game with two gilt-edged chances in the first half, one a long-range left-footer (Amita is primarily right-footed) that the Stallion keeper needed to brilliantly palm away from the top corner.

Fraser says he now calls Amita “Juninho” now after the famed Brazilian midfield maestro who played for Middlesborough and was known for his dribbling wizardry and small stature.

In attack the squad has Fitch Arboleda, a former UE Red Warrior who has been in previous national youth teams and just barely missed out on making the Peace Cup squad last year. Curt Dizon and Paolo Salenga, who both flew back from AFC Cup duty with Global on Friday night and didn't play Stallion, will also look to score goals in Bangkok. Kennedy Uzoka, a Filipino-Nigerian who found the back of the net in the Bolkiah Trophy in Brunei last year, is also a part of the arsenal.

(The Bolkiah Trophy is a tournament for mostly U21 teams with some older reinforcements.)

Alongside Amita in the midfield will be a pair of young Loyola Filipino-Brits, Charlie Beaton and Jorrel Aristorenas. John Kanayama and Yoyong Talaroc also come aboard from Global, as does Shirmar Felongco, who, along with Jay Shaun Soberano, are the only Ilonggos on the roster. Enzo Cheng, the son of team manager Jeffrey Cheng, is in the team. The younger Cheng scored in the Bolkiah Trophy last year.

Daniel Gadia of UP wasn't there on Friday, citing a need to rest before the Pachanga-Kaya game on Saturday, but he will have a good chance of starting at holding mid. Gadia scored in the two previous tuneups, a 1-1 draw with Manila Jeepney on Monday and a 2-1 loss to Loyola on Wednesday.

The defense will likely be under a lot of pressure from the opening whistle. Ian Clarino is included, and his UP back four mate Patxi Santos is as well. Loyola's Filipino-Australian Josh Grommen is in the mix as well as Ian De Castro, who is serving a year of residency in UST before joining Marjo Allado's Tigers next season.

UP's Mark Besana, who missed all of UAAP Season 77 with a broken clavicle, is healthy again and will make the trip to Bangkok, as will San Beda's Matthew Asong and former Kaya striker, Luis Abadia, who says he may play some centerback instead.

The three goalies will be Junjun Badelic, who is fresh from two terrific matches for Global in the AFC Cup, Kaya's Nick O'Donnell, and Ace Villanueva, the Season 76 Best Goalkeeper from UP. O'Donnell was decent in tidying up in the first half on Friday, and I think it's a toss-up between him and Badelic for the starting job.

Just missing the cut was the training pool's fourth goalie, Nelson Gasic of Lyceum. Gasic is from Baguio and also plays in JP Voltes in the UFL's second division. One of Gasic's strengths is a startlingly long, Tom Brady-like javelin throw.

There are 24 players on the list, with one player probably getting cut in Thailand to make the squad the usual 23. Fraser says he will bring an extra body in the event of an injury before the matches. 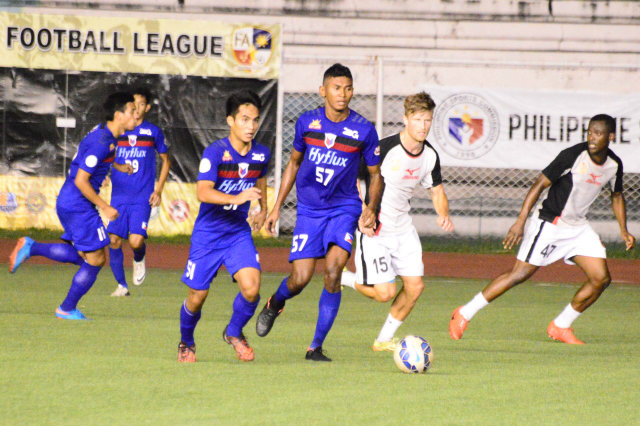 With the limited time together, (the team did have a camp in Japan in November, though), Fraser says he will keep the game plan simple, and try to slow the game down against the swift Koreans and Thais. The task of qualifying out of murderous group is a daunting one, but Fraser isn't cowed.

“It will be tough to qualify,” admits Fraser. “Thailand have been in camp and playing together for a while. North Korea maybe has had the same team together for two years.

“But we will play football. We will not park the bus. We'll just slow the tempo and play our brand of football.”

Fraser seems to give his roster a real vote of confidence when he said, “we are strong all over the park. I don't have to plug any holes.”

In the tryouts Fraser did, however notice a need to improve on the fundamentals of the first touch and passing the ball among the aspirants. He did, however, single out two football programs for their work.

“Somebody is doing something good in Davao, and I think the Kaya Academy is doing a great job.”

At any rate, the weary U22s slumped to a 3-0 loss against a more experienced opponent on Friday. But results are only part of the story of this team.

The U22 Azkals may have a mountain to climb in Bangkok, since only the ten group champs plus the best five runner-ups make it to the 2016 tilt in Doha, Qatar along with the hosts. That means the Philippines will probably need to beat Cambodia and get a handsome win against Thailand to punch their ticket to Qatar, assuming they lose to the menacing Koreans.

But tough international exposure will only do these young Pinoy footballers a world of good going forward, and the Pinoys will not go down without a fight. Twenty-two year guys don't usually sacrifice fun Friday nights for nothing.

The Philippines plays Korea DPR on March 27, Thailand on March 29, and Cambodia on March 31. The venue for all the matches is Bangkok's Rajamangala stadium. There are no reports of TV coverage for the Philippine market but there could be streaming links available. Check out the full schedule and roster here on this link. - Rappler.com