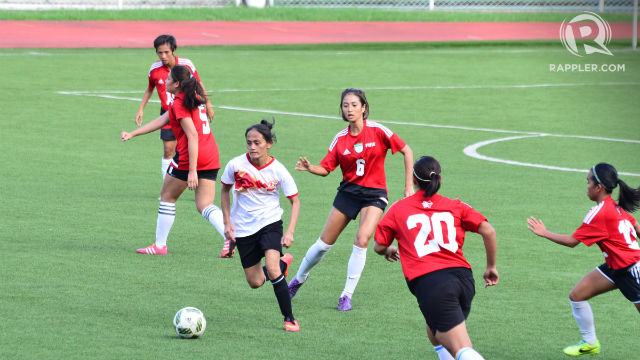 FIELD OF THEIR OWN. Aiza Mondero of Hiraya beats the Green Archers defense.

MANILA, Philippines – There may only be a few hundred spectators at any match in Rizal Memorial. There is no sound system, so at times the players playfully hum the FIFA anthem when they take the field. No TV coverage and just a handful of media.

But the 2016 PFF Women's League is part of a quiet revolution in the women's game in the Philippines. Apart from the 5-team UAAP, it's the only 11-a-side, 90-minute senior women's league in Metro Manila and perhaps even in all of the Philippines.

“We have lots of 7-a-side games but the complete performance of a player can only be checked over a long period in a game,” says Let Dimzon, the FEU women's coach.

“I hope PFF will keep this league,” she adds.

First, a few facts about the competition. It's funded through the Women's Development Program of FIFA. Each team, for a bargain-basement registration fee of P15,000, gets free uniforms, socks, and shoes. There are balls thrown in as well. The matches are all held in Rizal Memorial on Saturdays and Sundays.

Since there are 11 teams and it's a double-round robin affair, each side gets 20 matches, with one club getting a bye on a given weekend. The competition will have a break for Christmas then continue into the new year.

One team, Fuego Espanya, reportedly has 5 players who had never played 11-a-side in their lives before this tournament.

The tournament will try to complete its first round before the UAAP early next years since the UAAP doesn't want its athletes plying in other comps while theirs is ongoing. Then after the UAAP, the second round will take place.

Yes, it's true. The PFF is certain of holding a women's senior league next year, but not a men's league, since the Philippines Football League is still not a certainty yet. 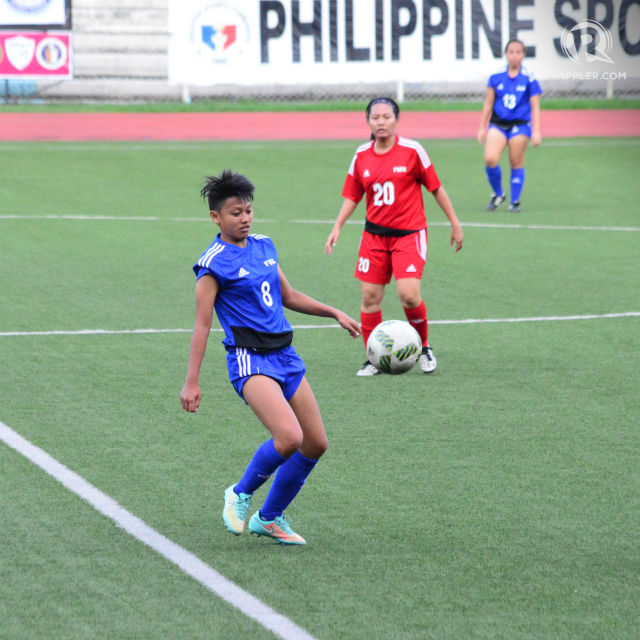 KICK THAT. Etang Lader of TYFA.

It's remarkable to note how hurriedly this league was organized. I'm told that the shoutout for the manager's meeting was given on one day's notice. And yet 6 non-UAAP teams were able to participate. It speaks well about the untapped pool of female players in the country.

The league also gives a second chance for women to continue their football journey after UAAP, which previously was pretty much the highest tier of female football in the country.

“It's a motivation for us old timers to get back into shape and try and compete with the kids,” says Patrice Impelido of Hiraya. Impelido is a Filipina-American who learned soccer in Western Michigan University before playing for the Philippines. She is now an assistant coach with youth national teams.

At 29 years of age Impelido still has plenty of football left in her as she usually starts for Hiraya at holding mid.

Another player who is coming back out of the woodwork is Etang Ladero from Dumaguete. The gifted former national team player who won a UAAP title with FEU is playing for TYFA. Apparently she was allowed to play by Philippine Air Force, where she is enlisted.

The PFF has held tournaments for women before but never quite to this scale. Impelido is starting to see the level of play rise.

“Before you would see teams kick the ball long and whoever was fastest would win. Now you see more build-up play.”

It's likely that UAAP teams will come out on top once the season is over. After all they have the youngest and fittest players who train regularly as units the most often. But the games between them and the other squads are mostly close.

Last weekend the top side, DLSU, bristling with weapons like Sarah Castañeda, Kyla Inquig and Irish Navaja, were given a torrid time by Hiraya, only winning 1-0 thanks to a late header by Kyra Dimaandal. Hiraya keeper Gely Tiu, formerly Ateneo's goalie, had a stellar day. Hiraya has only one win in 3 matches while the Lady Archers have mostly mowed down their competition, going 3-for-3 while racking up a +10 goal differential.

Outkast is another team on the rise. They have two youth national team players in goalie Yasmin Elauria and Lindsay Whaley, both from the Subic area. Outkast has two wins and a draw. Whaley, just 16, struck in a shocking 2-0 upset of reigning UAAP champs UP.

Alisha De Ocampo of Green Archers United is another prospect. The high schooler from DLS-Z starred in a 4-0 rout of Hiraya with a hat trick. GAU features two other former national players, Marielle Benitez and Belay Fernando. Ironically Fernando is an employee of the Loyola Meralco Sparks, but since LMS has no women's team, she plays for GAU.

Here is a sample of the action in the league: Ateneo coming from behind to top UST 3-1.

But it isn't just this league that is making things look up for Pinay football. The Metro Manila Futsal League plans to have regular leagues, (not just one-day festivals), at the U14 and U17 age groups next year. The MMFL is run by Fair Play For All Foundation, Dream Big Pilipinas, and Gawad Kalinga. They recently finished holding a Pinay Community futsal league in the Payatas court of Fair Play For All.

These futsal events will hopefully complement the efforts of the Rizal Football Association or RIFA, which holds girls 11-a-side play for high schools like Miriam and Assumption.

In recent times the Philippines U14 national girls teams have finished second twice in recent international competitions. Two years ago Dimzon led that team to a silver medal with Joyce Semacio of Davao, who won the tournament's golden ball award.

In the last two years the Philippines has defeated both Malaysia and Singapore in senior level. This shows that the Philippines arguably has a better shot at international glory, especially outside ASEAN, in the women's than in the men's arena.