MANILA, Philippines - The first of the United Football League's senior competitions for this year, (there could be as many as 3), begins on Saturday, February 6 with the UFL Cup, which will be played in Rizal Memorial. The league has decided, (correctly), to revert to the previous system of running the competitions one after the other, instead of semi-concurrently.

Each team can only field 4 foreigners at a time, and one is recommended to be an Asian. There can only be 5 foreigners in a game-day roster.

The Cup has a group stage then a knockout stage for the best 8 sides. A draw was made to divide the teams into two round-robin groups of 6, from which 4 make the quarters from each pool. The final match will take place in April.

Since Global did not participate in the 2015 Cup, (won by Kaya), they were not seeded in the draw. The result is a rather unbalanced pair of groups.

In Group A the champs Kaya square off with 2012 Cup-winners Stallion plus 4 teams who played in the old second division last year, JP Voltes, Laos, Agila-MSA, and Forza.

On paper Group B is a murderer's row, but don't be surprised if Laos and JP Voltes give the big guns Kaya and Stallion fits.

There will be no network TV coverage for the group stages of the Cup but TV5 will air matches of the business end of the competition. The league also intends to provide youtube highlights of the games starting this weekend.

Let's take a look at all of the sides.

(Note: as of the writing of this article, the UFL has not yet released final approved rosters of the teams, so there could still be changes in the players mentioned for the specific teams.)

Kaya will be determined to retain the title they won last year in a penalty shootout against Ceres. They have made several big off-season acquisitions, including grabbing Shirmar Felongco from Stallion and welcoming back Antonio Ugarte from Thailand.

Felongco is a blazingly fast player who can operate from either the wing or the center of the midfield. He has a nose for goal, as evidenced by this brilliant strike in the 2015 SEA Games, a goal I forgot to include in my Goals of the Year list for 2015. It's the first goal in the clip.

Midfielder Ugarte is another Filipino who surely has upped his game playing in the lower levels of the Thai football pyramid. As always, OJ Porteria will be a main man for coach Chris Greatwich. 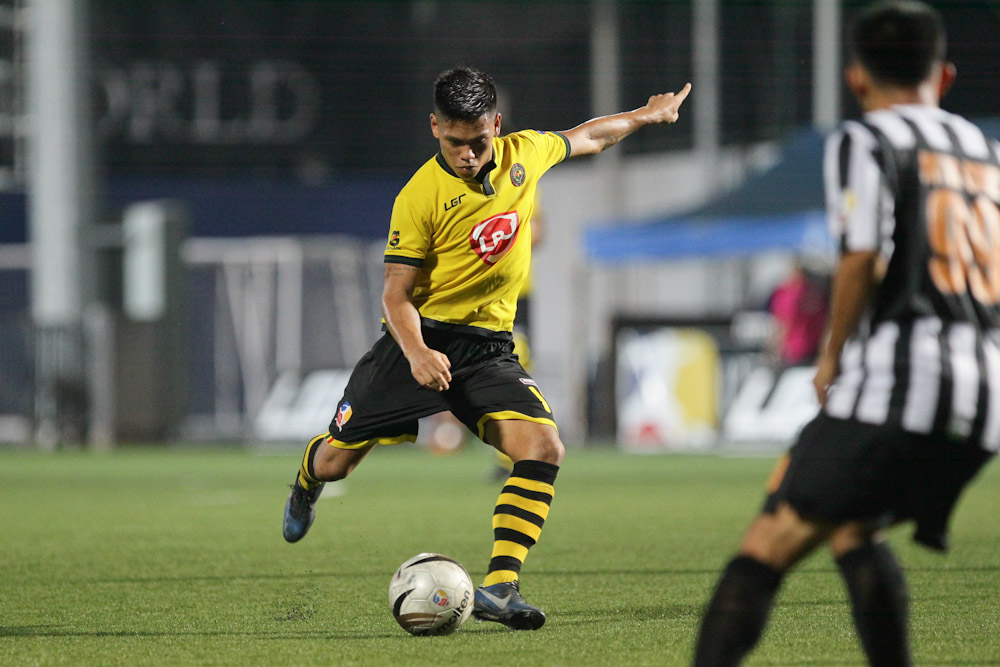 OJ Porteria will be a big part of Kaya FC, which is coached by Chris Greatwich.

Stallion have plenty of quality with Simone Rota in defense and Balot Doctora leading the attack. They are a physical team but a skilled one too. Look out for U23 Azkal Fitch Arboleda to really blossom this season. A key pick up is Reuben Sillitonga, a Filipino-Indonesian who was with Pachanga, Global, and Loyola previously. He has shown his versatility in a variety of positions for those clubs. Josh Beloya is also in Stallion now. The former Azkal looks to reestablish himself in the scene after stints in Kaya, Global, and Ceres.

JP Voltes, (formerly known as Manila All-Japan), may not have pedigree but they feature a bunch of players with UFL experience. Defenders Alex Elnar and PJ Fadrigalan are together again on a third team after previously playing alongside each other for Loyola and Jeepney. Voltes also corraled Masaaki Yanagawa, a very tall and J-League experienced centerback from Global.

The Voltes goalie is Nelson Gasic, from Baguio and Lyceum. He is internationally-sized but will have plenty of work against the top guns.

The biggest news for coach Kyo Nagami is the loan deal with Ceres that has brought over 3 Negrenses; centerbacks Camelo Tacusalme and Dapal Unabia, and the hellaciously quick J Baguioro in the midfield. These new additions alone could make the side very competitive.

Laos is another squad that won promotion from the second tier. Jovanie Villagracia's team will be captained by the very experienced ex-Global defender Bads El-Habbib. With two breathtakingly gifted Iranians in Shayan Jafari Dastjerdi and Hamid Hajimehdi, Laos can score goals with the help of another ex-Global player in Aaron Altiche. They recently played a friendly with Global and lost 3-1, a very creditable result.

Villagracia says midfielder Bryan Gumela is one to watch out for. The 26-year-old Dipolognon can play either holding or attacking midfield positions. The team is backstopped by veteran goalie Oliver Moreno, who is a very underrated shot stopper.

Agila – MSA will do very well to match up against the bigger, richer teams. But they have brought in some very fine young Filipino talent, like Val Calvo, a central midfielder from Benilde, and NU's Darwin Regala. (Regala will play for NU in UAAP, and since he has played in the university league for two years is now allowed to play in both leagues at the same time, but his priority will likely be with the Bulldogs.) The Masbateño is an outstanding young right back who should be in contention for a SEA Games slot next year.

No doubt Agila's goalie, Bitoy Rosalia, will be a busy man.

Forza is quietly building up their team for the cup. Look for Stephen Burda to likely help lead the team as in the past. The side stunned Green Archers 2-0 in a preseason friendly so they could spring a surprise or two.

The side features a vastly experienced Tommy Escoltero, who will steady the back line.

Ceres-La Salle are the top dog of Group B. The entry of Stephan Schrock only further beefs up a roster swollen with talent. Kevin Ingreso is another Azkal standout who will bolster the midfield and defense. Adrian Gallardo, the busmen's prolific Spanish striker, is back. If his form is anything like last year, he will pile up the goals.

Ceres' secret weapons are the brilliant Orman Okunaiya on the left flank and goalie Louie Casas, who has impressed Schrock. The Fil-German said the incredibly agile Casas is, “like a cat,” while making a cat-scratching gesture.

The Bacolodnon's biggest adversity this season may be fixture congestion. They, like Kaya, will play in the AFC Cup. That's 6 matches until May apart from their UFL games. But they are aiming high, as this video shows.

The Loyola-Meralco Sparks will be a tough team to beat but are now struggling with injuries. It has been reported that regulars Phil Younghusband, Simon Greatwich, Joaco Cañas are all hobbled, as is new signing Jinggoy Valmayor. They face Ceres on Sunday. It will be a test of their depth. Perhaps Aussie Tahj Minniecon, a gifted striker/winger, can step up. James Younghusband will likely have to as well.

To make matters worse, Arnel Amita, who is on the roster of the Sparks but was also slated to play for FEU this year, has an ACL problem and is also out for an extended period.

Loyola picked up Anto Gonzales largely for his locker room presence and also to help out as a coach. With these injuries, coach Simon McMemeny will likely also need him on the park.

Green Archers United Globe continue their reputation as a haven for homegrown talent with the addition of Aldrin “Paking” Dolino. The San Carlos wide player has won a national U23 title with Negros Occidental FA and is now finally in the UFL. He is the brother of FEU ladies defender Dai-Dai Dolino.

Last year it was Jimuel Ariola who was GAU's homegrown discovery. This year it just might be Dolino. It's been noted that he has the pace to threaten from the flanks, like Tating Pasilan and the other Negrenses in the side.

With Chieffy Calidgong back in the pink of health and Jhan Jhan Melliza now fully focused on the UFL after a stellar UAAP career, these Archers could be a dark horse. Watch out for Kennedy Uzoka, the tall Fil-Nigerian striker who is poised for a breakout year.

Global will hit the ground running this year with new signings, notably Filipino-Iranian-Swede Omid Lazarte Nazari. The midfielder has experience in the tough Swedish top flight.

Another big signing is the towering Arthur Kouassi, who starred for Jeepney. The Ivorian has plenty of ways to bulge the net. He will have to carry a lot of the scoring load, as Mark Hartmann has an injured knee and won't be able to train until the middle of the year. 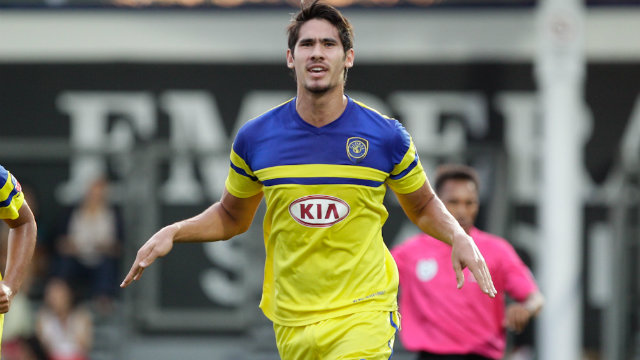 Mark Hartmann won't be able to train until the middle of the year.

Former Kaya netminder Nick O'Donnell joins the team and, alongside Junjun Badelic, will put pressure on Patrick Deyto, the usual starter, for the number one jersey.

More than ever, Misagh Bahadoran will need to take his game to the next level.

Nomads have assembled a team for the Cup that may be short on quality and experience, but they will be motivated. It's understood that the Philippines' oldest club is largely rejoining the UFL to allow its scores of youth players to get experience in the league's youth competitions. (The UFL now stipulates that a team must play in both major senior tournaments and the youth competitions as well.)

There is some quality in the roster. Darren Hartmann will likely command the defense while former UST Tiger Patrick O'Neill and ex-DLSU striker Don Rabaya are scoring options. Nigerian Danny Kross Ubiam brings plenty of UFL experience. The keepers are the youthful Enrique Ortiz and ex DLSU Archer Josh Cruz.

Little is known about UFL perennial Pasargad, but they have reportedly joined forces with Bright Star FC, so you can expect a strong Liberian flavor to the team. Myk Agbayani is back as coach, and the young mentor did well when he joined them in 2014 and very nearly avoided relegation from the first division.

Check out the schedule of this weekend's games here. This first weekend you can watch in the Rizal Memorial grandstand for free.

Ready for the weekend?Make your way to Rizal Memorial Stadium for Day #1 of the #UFLCup2016!See you there! Posted by United Football League Philippines on Wednesday, February 3, 2016