MANILA, Philippines – The Barangay Ginebra Gin Kings have been part of the Philippine basketball landscape for more than 4 decades. The team, however, did not start out at as the popular franchise that it is today. Its fan following during its early years in the PBA could be described as average at best.

La Tondeña Inc joined the PBA in 1979. The first brand that it promoted was Gilbey's Gin. The team was mentored by Pilo Pumaren, the father of Derrick, Franz, and Dindo, and was not bannered by any big-name player. In fact, its most notable player in its maiden season was Willie Tanduyan, a name only hardcore basketball fans will remember.

The team managed to recruit Willie Generalao in 1980 and he went on to win the 1980 Rookie of the Year award. Gilbey's Gin then was coached by former Letranite Nemie Villegas who steered the team to the semifinals in the All-Filipino where it eventually finished 4th.

The team changed its name to St George Whiskies in 1981 before reverting back to the Gilbey's Gin brand the following season. Arturo Valenzona took over the coaching chores for the squad in 1982.

Gilbey's created a splash in 1983 when it flew under the radar to barge into All-Filipino relevance. Generalao had a solid supporting cast in former Ateneo Blue Eagle Steve Watson, Terry Saldaña, and the high-flying Gary Vargas. However, it was swept in the finals by powerhouse Crispa, which eventually won its second Grand Slam that season.

The turning point for the franchise came in 1984. After the disbandment of Toyota, Robert Jaworski and Francis Arnaiz signed up with the then Palanca-owned La Tondeña ballclub.

For the second straight season, Gilbey’s Gin challenged Crispa for the All-Filipino title. Despite outstanding finals performances from Arnaiz, Watson, Vargas, and Joey Marquez (yes, the actor), Gilbey's Gin was unable to overcome injuries of Jaworski and center Romulo Mamaril, paving the way for Crispa to win its last PBA title.

The following season the franchise changed its name to Ginebra San Miguel, Valenzona was unceremoniously axed and replaced by Jaworski, who became the second playing coach in the league, after Norman Black of Magnolia.

Jaworski recruited former Toyota teammates Arnie Tuadles and Ricky Relosa to bolster the lineup and named another Toyota alumnus, Rino Salazar, as assistant coach. But these moves did not sit well with some of the Ginebra veterans.

Jaworski was already 39 years old in 1985, but he showed he still had a lot left in his gas tank. His leadership and firebrand style of play captivated audience who were learning to live without Toyota and Crispa.

Fans slowly started to gravitate towards Ginebra even though it was not considered one of the stronger teams in the league.

In a game versus the national team – then carrying the name Northern Consolidated Cement – on October 22, 1985, at the ULTRA in Pasig, Jaworski sustained a busted lip after being on the receiving end of an inadvertent elbow from Jeff Moore.

"The Big J," as Jaworski was called then, was brought to the nearby Medical City to get stitched up.

By then, NCC had already built a sizeable lead and looked poised to win via blowout. Jaworski, however, returned to the venue by the 3rd period and checked himself back in the game in the 4th quarter.

The national squad was up by 15 points with 7 minutes left to play, but Jaworski's entry ignited an inspired Ginebra rally. The crowd was captivated as it witnessed a memorable comeback by a Ginebra team which refused to lose and eventually escaped with a close victory.

"The game versus NCC was when Ginebra revolutionized the definition of Never Say Die. That time, the effort was described as Never Say Die," said Mercado.

"But when Ginebra consistently came back from huge deficits in the succeeding games and conferences, the idea of 'Never Say Die' became associated with the team and became part of its legendary mystique."

Jaworski, at 39 years old, made the Second Mythical Team and the All-Defensive Team in the 1985 season. He also helped define that year the Never Say Die spirit and brand of basketball that fans have grown fond of. 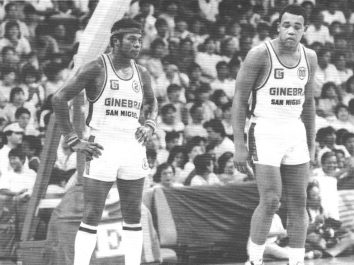 By 1986, Great Taste and Tanduay were largely considered the top teams in the PBA. Ginebra was also evolving not only as the league's most popular ballclub but also as an emerging contender.

Arnaiz had left for the States, while all the players who went against Jaworski the previous season were shipped out. A new breed of recruits shaped what would turn out to be the early stages of the team that would become the most popular in the league.

During that season's Open Conference, Jaworski scored a major coup by securing the services of Michael Hackett, the Best Import of the 1985 Reinforced Conference, and arguably the best import to ever play in the PBA, Billy Ray Bates.

Hackett and Bates formed one of the most potent import combinations in the history of the league.

The two explosive imports led Ginebra to its first ever championship. A 40-year-old Jaworski made that season's First Mythical Team. Ampalayo was named Rookie of the Year and made the Second Mythical Team with Chito Loyzaga and Saldaña. Loyzaga, meanwhile, was named to the All-Defensive Team.

Ginebra's success in 1986 further heightened its popularity. In the next two years, the franchise secured the services of Rudy Distrito and Rey Cuenco. These two, along with the Loyzaga brothers, Ampalayo, Isaac, Gonzalgo, Mamaril, and of course, Jaworski, formed the foundation of the team, which briefly became known as Añejo Rhum in 1988.

By then, the squad had cemented its place in Philippine basketball. It had owned the concept of Never Say Die by consistently refusing to give up despite staring at huge deficits.

The team's physical play was also seemingly patterned after the "Bad Boys" of the Detroit Pistons of the NBA. The team showed it was not afraid to mix it up and engage in scuffles against any squad in the league.

Even today, coliseums reverberate with chants of "Ginebra! Ginebra!" when the franchise that Jaworski built takes the floor. The names of the players may have changed, but the adulation and the loyalty of fans remain the same. – Rappler.com