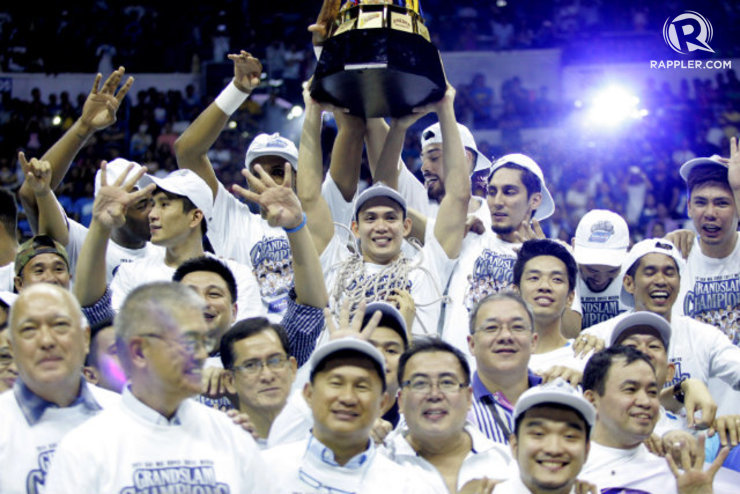 4-PEAT. The Mixers hold up their fourth straight championship trophy dating back to the 2013 Governors' Cup.

MANILA, Philippines – Destiny.  The recent Governors’ Cup championship victory by San Mig, fashioned out after a 92-89 humdinger of a win over Rain or Shine in their winner-take-all duel last July 9 to give the Mixers a historic grand slam and a fourth straight PBA title, was all about destiny.

After all, the events that unfolded to eventually give the original PureFoods franchise only the fifth grand slam in PBA history, and the first in 18 years, all point to a providential, if not divine, element in play throughout this historic journey.

How can one explain what took place in the fifth and deciding game, for example?

The Mixers, rebuffed decisively in their first attempt to clinch the rare feat in Game 4, worked painstakingly this time to take the initiative early, never allowing the Elasto Painters to go ahead after the latter tied it up at 34 midway through the second quarter. They then went on a murderous stretch to take a seemingly formidable 69-53 lead, aided by the benching of Arizona Reid who was hobbling with a sprained ankle he sustained in the previous contest.

That Reid injury came out of the blue and definitely was a factor in this contest, as was several misplays normally not committed by the E-Painters. That pass by Paul Lee to a teammate that was somehow obstructed by the referee in front of the ROS bench is a case in point.

San Mig’s blowing all but one point of that 16-point lead once Reid returned, as well as the Mixers’ holding firm never to relinquish it also had some air of providence to it, as did the four-straight misses from the line by James Yap and Marc Barroca, two of San Mig’s better free throw shooters, in the dying seconds that left the door open for the E-Painters, yet didn’t make any difference in the end.

And those successive misses from three-point distance by Jeff Chan, Paul Lee and finally Arizona Reid on that last play, though defended well, would also indicate that luck – or fate – was simply not on the Mixers’ side.  Heck, those three are among the best three-point bombers in the entire PBA, and Lee himself demonstrated that earlier in the game where he hit treys seemingly coming from the parking lot, and Reid had made it a habit of burning San Mig on that front particularly in their two victories in the series.

But the fact that these three tried to at least extend the game into overtime, but failed, seems to tell all and sundry that, no, it can’t happen simply because San Mig is destined to win this coveted and prestigious grand slam, certainly the greatest feat any team can accomplish in the local pro league.

The journey that the Mixers took to get this “once-in-a-lifetime opportunity,” as Finals MVP and long-time top gun James Yap himself described it, is also fraught with circumstances that point to a destined grand slam victory by San Mig.  In the two previous conferences where they had to win to set up this appointment with destiny, the Mixers had to survive seven do-or-die battles, eight if one includes their Game 7 victory over sister team Petron in the 2013 Governors’ Cup.

They had to beat Talk ‘N Text in the deciding game of a best-of-three quarterfinal series in the 2014 Philippine Cup, where they had a 1-5 start partly due to injuries and had to win four straight games at the end of the eliminations to qualify for the playoffs.  They also had to do the same in Game 7 of their semifinal matchup against Giñebra witnessed by an all-time PBA record crowd of 24,886. That was the game where they blew out the Gin Kings aided by the 30 points of Big Game James and the 28 of P.J. Simon.

Then, the Mixers had to come from being snuffed out twice by Alaska in the quarterfinals of the 2014 Commissioner’s Cup after falling behind 1-0 and having to win the rubber match, and also had to survive Air21 in a deciding game in their best-of-five semifinal series. Finally, San Mig had to go the full route in beating both TNT and ROS in the semifinals and finals of this conference to complete the grand slam journey.

This historic feat by the Mixers – as indicated by the kind of journey it took – may not have come with the dominance that the four earlier grand slams were accomplished, but it certainly stands out for the determination, grit and teamwork it took to achieve it.

One should note that Crispa’s two grand slams in 1976 and 1983 took place seven years apart of each other, while San Miguel Beer’s came six years after that in 1989, and Alaska’s own followed after another seven years in 1996.

That it took all of 18 years for another grand slam to happen may be attributed to the much greater difficulty of pulling off such a feat nowadays due to the PBA’s greater balance. The parity that now exists among teams has made it an even more difficult and obstacle-laden journey to even get near to pulling off the feat.  Since Alaska’s grand slam in 1996, only three teams – Alaska itself in 1998, Ginebra in 2004-05 and Talk ‘N Text in 2010-11 – won the season’s first two conferences, and only the Tropang Texters really came close to scoring a triple-crown victory when they lost a heartbreaking seventh game in the Governors’ Cup finals to Petron.

It was actually a wash for a six-year period between 2005 and 2010 when the league shifted to a two-conference format, but the rest of the long cycle really saw no single team dominate anymore the way it was seen during the Crispa-Toyota days, or the days of San Miguel Beer that used the core of the Northern Consolidated team that won the Jones Cup title and the then-Asian Basketball Confederation championship for the country in the ‘80s.  Or even the days when Alaska prided itself with the chemistry that was developed by, yes, Tim Cone, the same coach that orchestrated this phenomenal San Mig achievement.  Cone, of course, now stands all alone at the top of the league’s coaching firmament as the only one to have won two grand slams and 18 championships.

The great Alvin Patrimonio, now the team’s manager who used to carry the PureFoods torch as he established his legend as perhaps the second-greatest player in PBA history with a record four league MVP trophies (tied with original Hotdogs star Ramon Fernandez), can really be proud of this San Mig team that took after his past squads and the great tradition they established with similar worth and commensurate honor.

(The Grand Slam was also part of my goal but it's sweeter now that I'm a team manager. This is the goal of the team and the PureFoods franchise. We want to dedicate the games to the Lord, management and all the supporters of the San Mig Coffee Mixers.)

(Both [MVPs and grand slam] are blessings. Both were born out of hardwork and sacrifice. Both are priceless.)

And just like Patrimonio, proud, too, can previous players who have worn the PureFoods, Coney Island, B-Meg and San Mig jersey be like Jerry Codiñera, who along with Alvin is the only other player to have his number retired by the franchise, Rey Evangelista, Dindo Pumaren, Glenn Capacio, Al Solis, Elmer Cabahug, the late Edgar Tanuan, Kerby Raymundo, Ronnie Magsanoc, Noy Castillo, Jun Limpot, Roger Yap, Jojo Lastimosa, J.B. Yango, Willie Generalao, Nelson Asaytono, Bong Ravena and Boyet Fernandez.

But a lot more people can similarly be proud of this bunch of players who have proven worthy of the PureFoods brand of talented, skillful, determined and gutsy play, people who were responsible for establishing and leading the team itself during its early days and into its evolution as a grand slam champion.

These are Ayala Corporation chairman emeritus Don Jaime Zobel de Ayala, whom one can still imagine jumping from his box seat with arms raised to cheer his team that was then under the Ayala Group, the late Ely Capacio who steered the team to a title in the early ‘90s and would have been immensely pleased despite a different role before his demise in the San Miguel conglomerate, Baby Dalupan who gave PureFoods its first title in 1990, former team manager and still big San Mig diehard Monchito Mossesgeld, former coaches Chot Reyes, Eric Altamirano, Chito Narvasa, Derrick Pumaren, Ronnie Magsanoc and Ryan Gregorio, and, of course, current management leaders Butch Alejo, Rene Pardo and San Miguel big boss Ramon Ang.

San Mig’s singular accomplishment, to be sure, was a product of a lot of people’s effort, but make no mistake about it. It came to pass as part of the team’s destiny mainly because Cone and his assistants, Johnny Abarrientos, Richard del Rosario, Mon Jose, Jason Webb and those who came before them who have moved on, Jeffrey Cariaso and Olsen Racela, fully invested themselves into this mission, as did, of course, the entire Mixers ballclub, whether starter or reserve, big star or role player, or just plain utility guy (see that ballboy who got a technical for trying to show the referee that a stepping call on Marc Pingris was wrong?).

It's really uncanny, but for one’s destiny to come to pass, he has to fully invest himself to bring the circumstances that will make it happen.  That’s the first and most crucial requirement of all, and that’s what the Mixers, from the first man to the last, precisely did. – Rappler.com

Bert A. Ramirez has been a freelance sportswriter/columnist since the '80s, writing mostly about the NBA and once serving as consultant and editor for Tower Sports Magazine, the longest-running locally published NBA magazine, from 1999 to 2008. He has also written columns and articles for such publications as Malaya, Sports Digest, Winners Sports Weekly, Pro Guide, Sports Weekly, Sports Flash,Sports World, Basketball Weekly, and the FIBA's International Basketball, and currently writes a fortnightly column for QC Life and a weekly blog for BostonSports Desk. A former corporate manager, Bert has breathed, drunk, and slept sports most of his life.