WARNING: Minor spoilers ahead. Nothing that’ll completely ruin it for you.

I recently found the music video by Rage Against the Machine that featured a poster of “Trump for President” in the background. I laughed at it then, in 1999 as a rookie newspaper reporter, but am not laughing now.

Viewing the pre-Occupy Wall Street guerilla shoot of the band with its grainy quality and quick jumpcuts, I feel odium mixed with just enough curiosity to see if I do throw up. Which is to say there’s shock at just how screwed up things have become, which leads to the inevitable follow through: how did we get here?

Which is to say, the moment between that and seeing the extrapolation of iterated futures that is Black Mirror makes for great entertainment – hey, here’s how the whole catastrophe happened.

Black Mirror is a TV anthology series created and written by Charlie Brooker, and executive produced by Brooker and Annabel Jones, that taps into our collective unease with the modern world. It used to be on UK TV when it started in 2011, hence the past two seasons have been only 3 episodes each (with the second season having a fourth ep holiday special), but it has since transitioned onto online streaming and is now a Netflix original series. This has allowed the creative team to work without a set runtime or content restrictions. Each stand-alone episode revolves around exploring themes of contemporary techno-paranoia, speculative fiction about the near future that’s as bleak as they come.

I laugh at some of the absurd and chilling scenes here but wonder about how bizarre our own timeline is.

In previous seasons, both disgust and absurdity were mixed in equal fashion to create the kind of creeping paranoia the show’s now known for: the UK Prime Minister is forced to fuck a pig as ransom for a royal; a micro recording implant lets a husband determine the fidelity of his wife; an animated bear becomes a popular political critic; and in two perverse studies of justice and police investigation, punishment has become a theme park open to the public in one, and in another, tech lets investigators clone the memory of an individual and torture and interrogate that “AI construct” to sidestep policies against extreme information extraction.

“We’re living in a time of immense flux and change,” says ​series creator Charlie Brooker, in the third season’s media notes. “It’s exciting, but it’s worrisome, and I guess this show is reflecting that – no pun intended.”

In the third season, the fact that the creators aren’t on a tight deadline with just 3 episodes seems to have given them more breathing room, with mixed results.

For one thing, I found “Nosedive,” the first episode starring Bryce Dallas Howard as insecure office worker Lacie in a happy, smiley, status-obsessed nightmare world where all things are judged through social media a less than stellar execution of the same idea explored in the eighth episode of the fifth season of Community. The one titled "App Development and Condiments" where the whole of Greendale becomes transformed into a mini-cult commune obsessed with the beta of the absurd app called "Meow Meow Beenz." 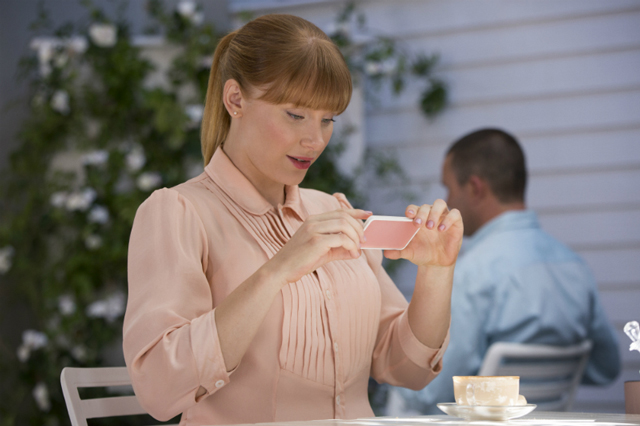 SNAPSHOT. Bryce Dallas Howard takes a photo of her drink in 'Nosedive.

On “Nosedive” our current obsession with ratings (duh, FB “likes”), is exaggerated when each person and each interaction is tagged with a numerical rating that can fluctuate by the minute. Dallas acquits herself (through the socialite villainy of the perfect blonde Alice Eve) with aplomb (she even gained weight for the role, she confessed in one press interview) as she suffers an actual, internal meltdown proportional to a very public social media breakdown. I wanted to like it but it’s just got less tongue in cheek and thus less theatrical fun where Community had already gone before.

The show is at its worst when it tries too hard, or becomes too forceful in its propaganda of caveat. Like graffiti, the best kind of near-future sci-fi is free of hype and agenda. It understands that it is of the moment and thus its own mortality is paramount – the brick wall might be torn down any day, implant tech might never take off at all; someone else might tag the space, permissiveness about drone advertising and legislation might get snapped up in a heartbeat.

The worst culprit in overreaching and its Exhibit A is the “Hated in the Nation” season finale. In it, there’s too much “possible” police procedural that bogs down the story into morose, B-movie territory that’s got more in common with a PhD essay than entertainment.

Combine that with beat cop cynicism (lines spouted by a noir-ish, run down Kelly MacDonald playing police detective Karin Parke) in near-future London, where micro drones stand in for extinct insect life to keep up pollination duties. It tries to be both personal and grand at the same time and doesn’t quite succeed at both. Overreaching, even for an episode that lasts 89 minutes. Still, there was some fun to be had seeing Faye Marsay (The Waif in Game of Thrones) as tech-savvy sidekick Blue investigating a string of serial deaths that have a sinister link to social media.

The most interesting and imaginative episodes are those that become cultural thought experiments rather than setups for social commentary.

In particular, the “Men Against Fire” episode is a great story in the tradition of Twilight Zone, Alfred Hitchcock Presents, and The Outer Limits, and just happens to be about our continuing fear of the “other.”

It’s an alternate future somewhere in Denmark and future soldiers Stripe (Malachi Kirby) and Raiman (Madeline Brewer) look like they’re some version of UN Peacekeeper with slick head-up displays built into their eyes through a cranial implant that assists them in squad comms and navigation. One thing is clear: they must protect frightened villagers from an infestation of vicious feral mutants nicknamed “roaches.”

That “they” turn out to be similarly human is just furniture in the whole mess that also happens to be about racism and fear of the foreign invader, the willingness to dehumanize and objectify a particular tribe to ease their extermination. “Why would anyone help a roach?” quips one of the soldiers and the tech that lets soldiers’ implants see said “roaches” as monstrous creatures isn’t even that difficult to program (Google Cardboard on crack), but its effectivity is without doubt.

“Humans are actually quite empathic,” says the head programmer for the soldiers’ implants and explains that, this way, it’s easier to cleanse the population of the cursed other. The Nazis did much the same thing, equating Jews with animals and thus are subhuman. What is happening now with the Syrian refugees? How about the Yazidis and the Turkish and the Algerian exiles? How many of the stateless have become less than people through the lens of migrant laws?

The tech in season 3 is not just a tool that is double-edged but the use of it fuels a distortion of culture. I am reminded about how Transmetropolitan creator Warren Ellis talks about how sci-fi completely missed any kind of prediction about the smartphone in his book Cunning Plans: “Science fiction never saw it coming. Neither of these things. Captain Kirk’s communicator, Dick Tracy’s radio wristwatch, any of that stuff – not a patch on the modern smartphone. The mobile phone changed fiction, massively. Imagine the TV series 24 without the mobile phone.”

See here: if the Queen in Snow White had been using her magic mirror to figure out who’s the fairest of them all, in Black Mirror it’d be reflecting a stylized, ultra-filtered and highly sexualized photo worthy of a profile pic to end all profile pics. Add a Snapchat crown and any millennial would be proud to call her bae. She’d be doing it all on her smartphone.

“I’m a total dweeb and I love technology,” Brooker says. “But I’m (also) an incessant worrier…That’s why the show comes out as a sort of worried fever-dream nightmare about technology.” Dystopia never seems too far, and yet it never seems near enough.

I also really like the “Playtest” episode about the implanted AR horror game, prickly and hurriedly truncated as the ending is. Directed by ​Dan Trachtenberg of ​10 Cloverfield Lane-fame, it’s where a thrill-seeking globetrotter Cooper (Wyatt Russell) visits Britain, hooks up with a local girl and tests a video game so advanced, it’s downright terrifying. I swear that Ken Yamamura playing game creator Shou is the closest and most apt homage to Hideo Kojima of Metal Gear fame the West has come up with. 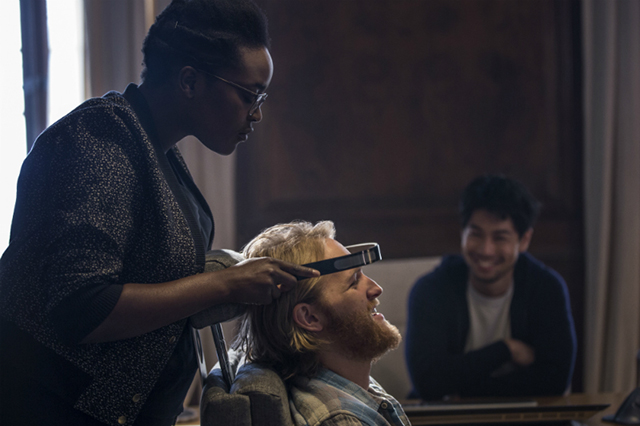 VIRTUAL WORLDS. The 'Playtest' episode might just make you rethink how you relate to games.

Meanwhile, one of the best episodes is “San Junipero”; about an eternal holodeck world as a proxy for the afterlife. It’s also the most inspirational one, a dose of fresh air in the otherwise sterile and morose worlds that populate the obsidian looking-glass.

It’s nominally set in California in 1987, but it tells us about love and life in our own near-future, and how tech can become stand ins for our most cherished beliefs, how making them real (as in the looped Belinda Carlisle song) can be every bit as precious and transcendent as even the saints and martyrs of old could imagine. Still, they never had Google, so who knows what those ascetics could think up if they did?

Probably the most classic and closest ep to current reality is “Shut Up and Dance.” It’s where a group of disparate people share the shame of being captured in perverse acts by hackers who’d invaded their laptop and mobile phone cameras. Essentially a blackmail story, this episode absolutely could happen today. For the lulz or the moralfags, it doesn’t matter. Techno-terrorism is real and cyber bullying is its youngest child.

I go back to Warren Ellis in the same book, to the part where he’s trying to convince people that sci-fi is less about prophecy than the way people changed and related: “I’m sitting in front of a roomful of people, telling them that science fiction isn’t and never was the literature of prediction. They don’t look convinced. It’s almost like telling people they were lied to. Science fiction was never supposed to be about predicting the future. There have been lucky accidents, of course, but the business of science fiction is in social speculation…It’s a possibility, an invention suggested by the sciences or the humanities, informed by the weather of the time. Science fiction is always about the time it’s written in. 1984 was always about 1948.”

In these little dystopias, there is nothing to look at except ourselves. Do not adjust your vertical. – Rappler.com

The latest season of Black Mirror is now streaming on Netflix.

Karl R. De Mesa is the author of the non-fiction books Radiant Void and Report from the Abyss (both finalists for the National Book Award); he is also the co-editor of the horror anthology Demons of the New Year.